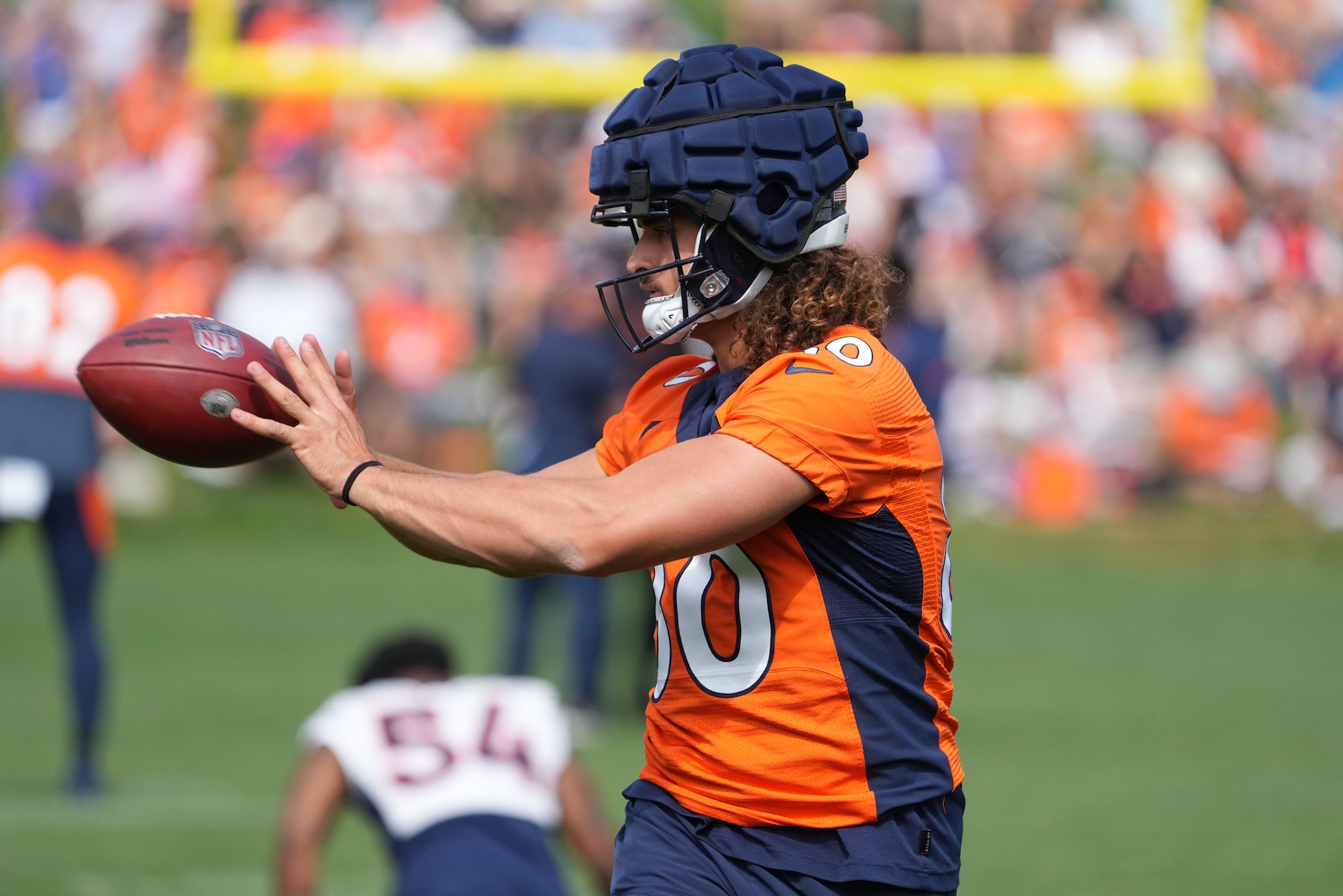 “They’re going to have to be,” Hackett responded when asked about Dulcich and fellow tight end Albert Okwuegbunam stepping up to replace Patrick in Denver’s offense.

The Broncos haven’t shown an interest in acquiring a wide receiver since Patrick was ruled out. While there’s time for that to change, it currently indicates the Broncos believe the answer lies in-house.

Dulcich first started impressing throughout organized team activities (OTAs) where he quickly gained reps with the first-team offense. Dulcich has carried that momentum over to training camp, showcasing the same strong hands and ability to create space at the top of his routes that captured the Broncos’ attention throughout the pre-draft process. Even prior to Patrick’s injury, Dulcich was rumored to become more involved by supplanting Okwuegbunam as Denver’s starting tight end.

Dulcich’s ability to serve as another big-bodied pass-catching option (6-foot-4, 243 pounds) on certain downs and distances will be an asset for the Broncos’ offense, particularly on money downs and in the red zone. That’s potentially where the Broncos are going to miss Patrick’s abilities the most. It’s an area where Dulcich and his 82-inch wingspan can help offset Patrick’s absence.

The Broncos are debuting a new-and-improved passing attack in 2022. General manager George Paton all but guaranteed improvement by trading for franchise quarterback Russell Wilson. The Broncos had consistently struggled to identify a legitimate quarterback following Peyton Manning’s retirement. Wilson is expected to answer that question once and for all. Wilson has a plethora of weapons to target even in the wake of Patrick’s injury. Courtland Sutton and Jerry Jeudy appear primed for career-best campaigns. Adding an immediately productive Dulcich to the mix would make Denver’s offense scarier than it already is.

Some may point out Wilson has never enlisted the services of a tight end with any great consistency. The Seahawks rarely rostered elite tight ends throughout Wilson’s tenure in Seattle, however, and Wilson understandably shifted attention toward D.K. Metcalf and Tyler Lockett in recent seasons. Wilson doesn’t have a personal vendetta against tight ends. He’ll target Dulcich plenty if the rookie playmaker gets open with the desired consistency.

The No. 80 overall selection in the 2022 NFL Draft, Dulcich was the third tight end selected following Trey McBride and Jelani Woods. Dulcich first started turning heads at the Senior Bowl where he displayed himself as a smooth athlete with technically refined route-running skills and sneaky burst off the line of scrimmage. Dulcich continued to impress at the NFL Scouting Combine, where he ran the 40-yard dash in an impressive 4.69 seconds and broad jumped 122 inches. The current hype Dulcich is receiving via Broncos training camp was always the natural next step in his progression.

The Broncos suffered an unfortunate setback when Patrick went down for the season. Denver’s offense is better with Patrick at its disposal, but the NFL never pauses—and Denver is forced to move forward while searching for in-house solutions. Greg Dulcich is a particularly intriguing one.