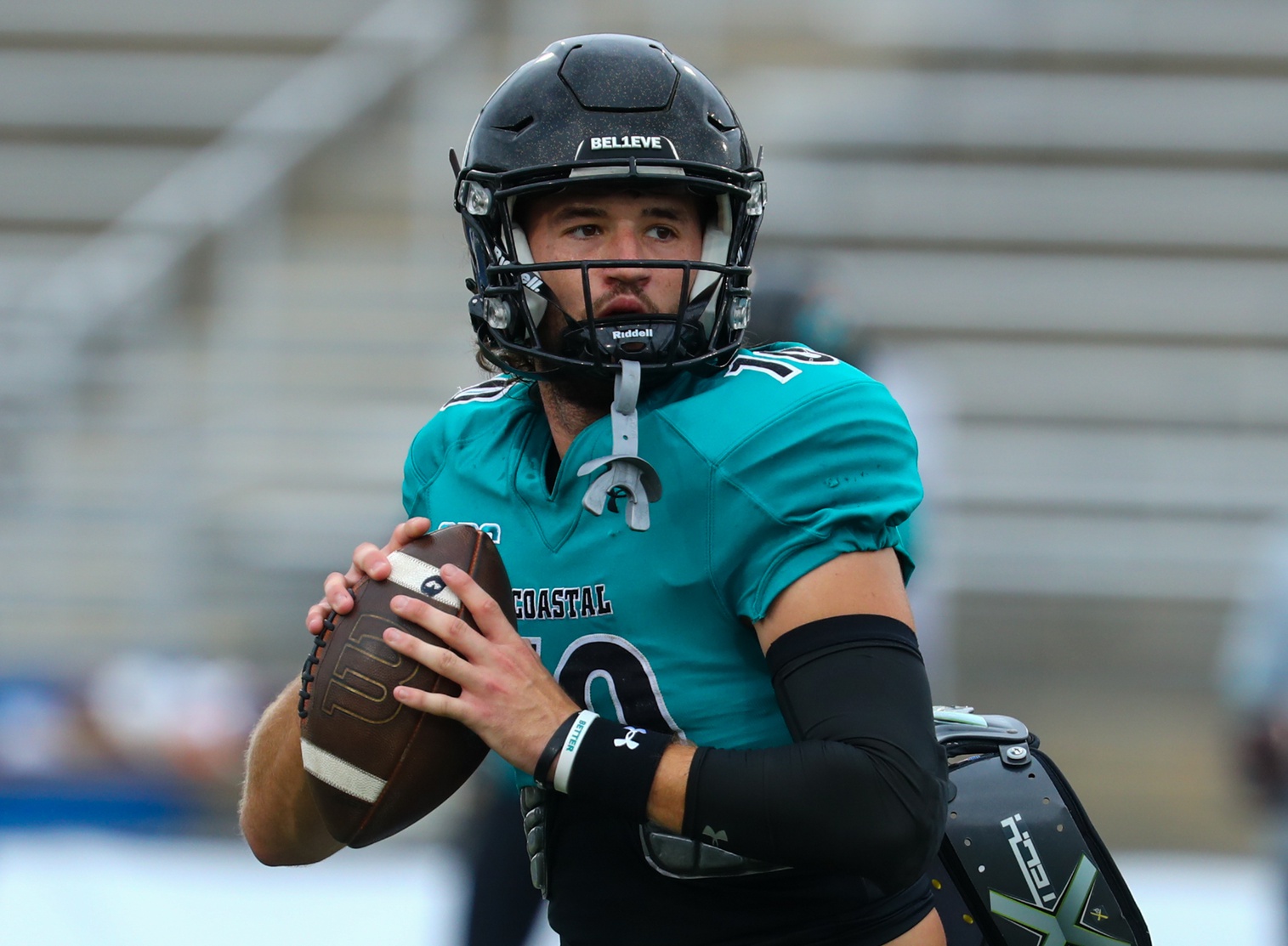 Grayson McCall Transfer Portal: What Are His 3 Best Landing Spots?

Coastal Carolina quarterback Grayson McCall is entering the transfer portal, according to multiple reports. McCall has served as the Chanticleers’ starting quarterback for the previous three seasons. In 2022, McCall threw 2,633 yards, 24 touchdowns, and two interceptions. A dual-threat quarterback, McCall has added 1,053 yards and 16 touchdowns to his offensive totals.

McCall has developed into one of the top quarterbacks in the country. His entry into the portal will be met with interest from various would-be landing spots. McCall possesses two remaining years of eligibility if he decides to take advantage of the extra season granted by the NCAA due to the COVID-19 pandemic. We’ve identified three potential destinations for Grayson McCall’s services.

Liberty will quickly be considered the favorite to land McCall. The reasons why are straightforward. Flames’ head coach Jamey Chadwell is replacing the outgoing Hugh Freeze, who accepted the job at Auburn. Chadwell spent the previous four campaigns (2019-22) as McCall’s head coach in Lynchburg. McCall hasn’t played for another head coach other than Chadwell. McCall consistently thrived under Chadwell’s tutelage.

Chadwell is an offensive-minded leader. McCall racked up various individual honors while showcasing command of Chadwell’s scheme. McCall has a 78:8 TD:INT ratio in his career and completed over 70% of his passing attempts. He’s also added 16 rushing touchdowns. McCall is expected to possess an interest in reuniting with Chadwell at Liberty. It’s also worth noting the program positioned Malik Willis to be a top-100 selection in the 2022 NFL Draft. NFL scouts are officially paying attention to quarterbacks that succeed at Liberty.

The Fighting Illini are expected to explore the transfer portal for a quarterback. Illinois enjoyed terrific success with Tommy DeVito in 2022, who transferred in from Syracuse. DeVito was a fifth-year senior that will now depart the program. Illinois is expected to attempt to replicate those achievements by landing another toolsy, experienced quarterback. They’ve proven capable of setting up a transferring QB for success.

Illinois only possesses young quarterbacks on their roster. As things stand, three-star quarterback Cal Swanson appears to possess a legitimate opportunity to win Illinois’ starting job. Illinois may want to add some veteran competition. Head coach Bret Bielema will be hesitant to move forward with his raw quarterbacks. Bielema’s hard-nosed squad exceeded expectations this season, finishing second in the Big Ten West at 8-4. McCall may attract interest from bigger programs, but Illinois could be an underrated suitor.

The McCall-to-Florida rumors have already begun gaining steam. The Gators are officially searching for a starting quarterback for the 2023 campaign. Their best bet is to find one via the portal. Anthony Richardson recently declared for the 2023 NFL Draft. Richardson’s declaration leaves the Gators without a clear-cut plan at quarterback moving forward.

Gators head coach Billy Napier oversees a unique offensive system that is fairly similar to what McCall operated at Coastal Carolina. Napier would allow McCall to play loose while installing tendencies he’s already comfortable executing. Transferring to Florida would also allow McCall to test his talents in the SEC. Playing in the best conference in the nation should appeal to McCall. Succeeding in the SEC would set McCall up nicely for the 2024 NFL Draft.