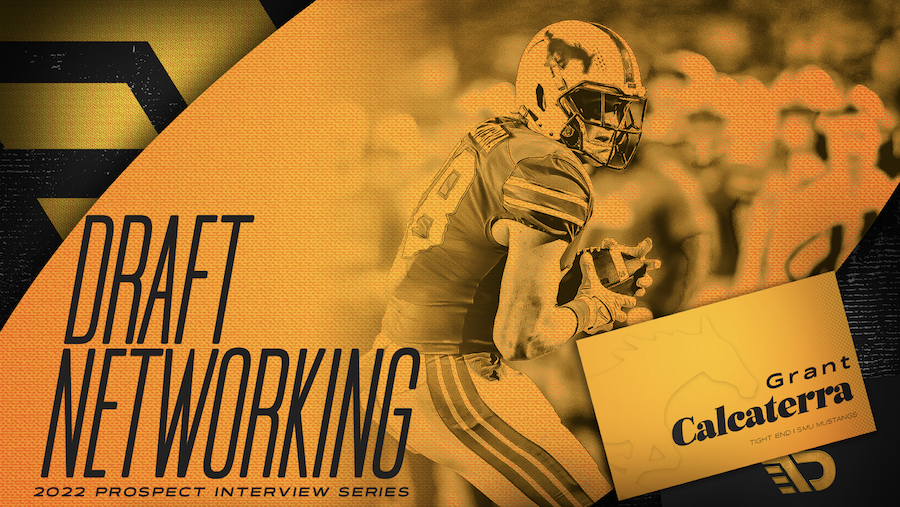 After medically retiring at the conclusion of the 2019 campaign due to a string of unfortunate injuries, former Oklahoma tight end Grant Calcaterra resurfaced at SMU in 2021 and picked up where he left off as one of the most impressive tight ends in the nation. Calcaterra possesses high-level abilities and instincts in the passing game as a big athletic target that poses difficulties for opposing safeties and linebackers. Calcaterra has overcome a significant amount of adversity and it’s prepared him for this life-changing moment.

Calcaterra recently spoke with The Draft Network about his unpredictable and resilient journey to the 2022 NFL Draft, his performance and experience at the NFL Scouting Combine, his favorite route to run, his savvy release package, which teams have shown interest in his services throughout the process, and so much more.

JM: It’s been quite the journey for you. How does it feel to be going through this process? It wasn’t always guaranteed.

GC: It’s been really great. It’s definitely been a grind for me. There have been a bunch of ups and downs for me. I now find myself in the same spot I’ve always dreamed of being. It all worked out for me at the end of the day. I went to the Senior Bowl and the NFL Scouting Combine, and I’m about to get drafted. My experiences have certainly been unique and they made me a more well-rounded player and human being. I’m very thankful for how the last few years have played out. My final year at SMU was great and it put me in a good position going forward.

JM: What did that experience do for your mindset and how you approach the game? I’m curious if it altered your outlook.

GC: Yeah, it absolutely did. It would have been easy for me to become negative, but I never allowed that to happen. Coming out of Oklahoma, I was considered a top guy in my class. This year has a super deep tight end class and we’ll see where the chips fall for me. It would be easy for me to get discouraged but I didn’t let it happen. It’s made me approach the game and life in a more positive manner. I think I’ve grown and learned a lot as a player. I‘ve certainly become a more well-rounded tight end. I’ve become a better player, teammate, and leader. This past season helped me a ton.

JM: You went to the combine and had a great week. The measurements were excellent (6-foot-4, 241 pounds), as was the 40-time (4.62). It lined up with what we see on tape. How do you feel about your overall performance?

GC: I felt pretty good about it. I would have liked to sneak into the 4.5s if I could (laughs). I actually had a minor ankle sprain that week. It happened just a few days before the combine. I didn’t even know if I was going to run at one point. To run a 4.62 with a bit of a sprained ankle was a solid result for me at the end of the day. I was satisfied overall. My bench press was good (20 reps) as well. My interviews went well. I met with several coaches and teams. It was a great experience. It’s exhausting, but also rewarding.

JM: Who are some of those teams that you met with formally, and what was that overall experience like? I imagine you have some virtual visits and top-30 visits coming up as well.

GC: I’ve spoken with a bunch of teams, nearly every team in the league. I’ve heard from the Denver Broncos, Tennessee Titans, Dallas Cowboys, Indianapolis Colts, and Cincinnati Bengals on a more consistent basis I’d say. I had Zoom interviews with the Broncos and Colts that went well. I know the Titans tight end coach [Luke Steckel] is planning to attend my Pro Day. I believe the Cowboys are planning to work me out at some point as well. I have some more things pending as we continue to figure out the rest of my schedule.

JM: There’s a lot of interest in you and it’s easy to see why. When I turn the tape on, I see a tight end with terrific athleticism. You make a huge impact in the passing game. How did you develop that aspect of your game?

GC: I’m a natural pass-catcher. I played some receiver growing up and throughout high school. I think a lot of my receiving skills are a natural occurrence because I played so much receiver throughout my youth. It’s always come natural to me. I’ve obviously fine-tuned my game throughout the years as I continue to maximize my potential. It’s largely a product of receiving a ton of reps over time.

JM: It shows. You’re a great route-runner as well. You’re extremely savvy. Do you have a favorite route to run?

GC: It’s tough to say. I love running corner routes. I love anything that awards me opportunities in man coverage. I love running an inside-fade route. I like a deep crossing route a lot as well. Those are some of my favorites.

JM: What are some of the ways that you create separation in terms of your release package and things you can do throughout the route?

GC: It’s important to know where you need to end up and how fast you have to get there. That definitely comes first and foremost. What kind of defense are they running? What coverage are they in? Is it man coverage? Is he lined up inside or outside of you? There’s just so much that goes into how you can manipulate defenders in coverage and get him to go where you want him to go. You always need to keep your end goal in mind. It’s important to use your hands and be physical when creating separation. You have to be quick and efficient getting in and out of your breaks. Last but not least, you have to attack the ball.

GC: I love the versatility of it. Not only can you be effective in the passing game, but you can also be effective in the run game as well. You can play in multiple formations and personnel groupings. You help make life extremely difficult for the opposing defense. Playing as an in-line blocker and having success in the run game gives the offense a huge advantage. A tight end that can run, block, catch and pass protect is just so valuable to an offense nowadays. I love creating those mismatches. That’s my favorite part of playing the tight end position. I’m the outlier that everybody has to worry about because I can do so many different things.

JM: That’s the perfect way for us to bring this excellent conversation to a close. I’ve really appreciated your time today. What kind of impact is Grant Calcaterra going to make at the next level?

GC: I think I’m going to be one of the best pass-catching tight ends in the NFL. I want to be a versatile player for our offense. I want to help us in the run game and the pass game. I want to create mismatches at the next level. Most importantly, I want to win. I want to be that guy that my team can count on as we attempt to make a run to the Super Bowl in my first season. I want to lead by example and my job as we rack up the victories.