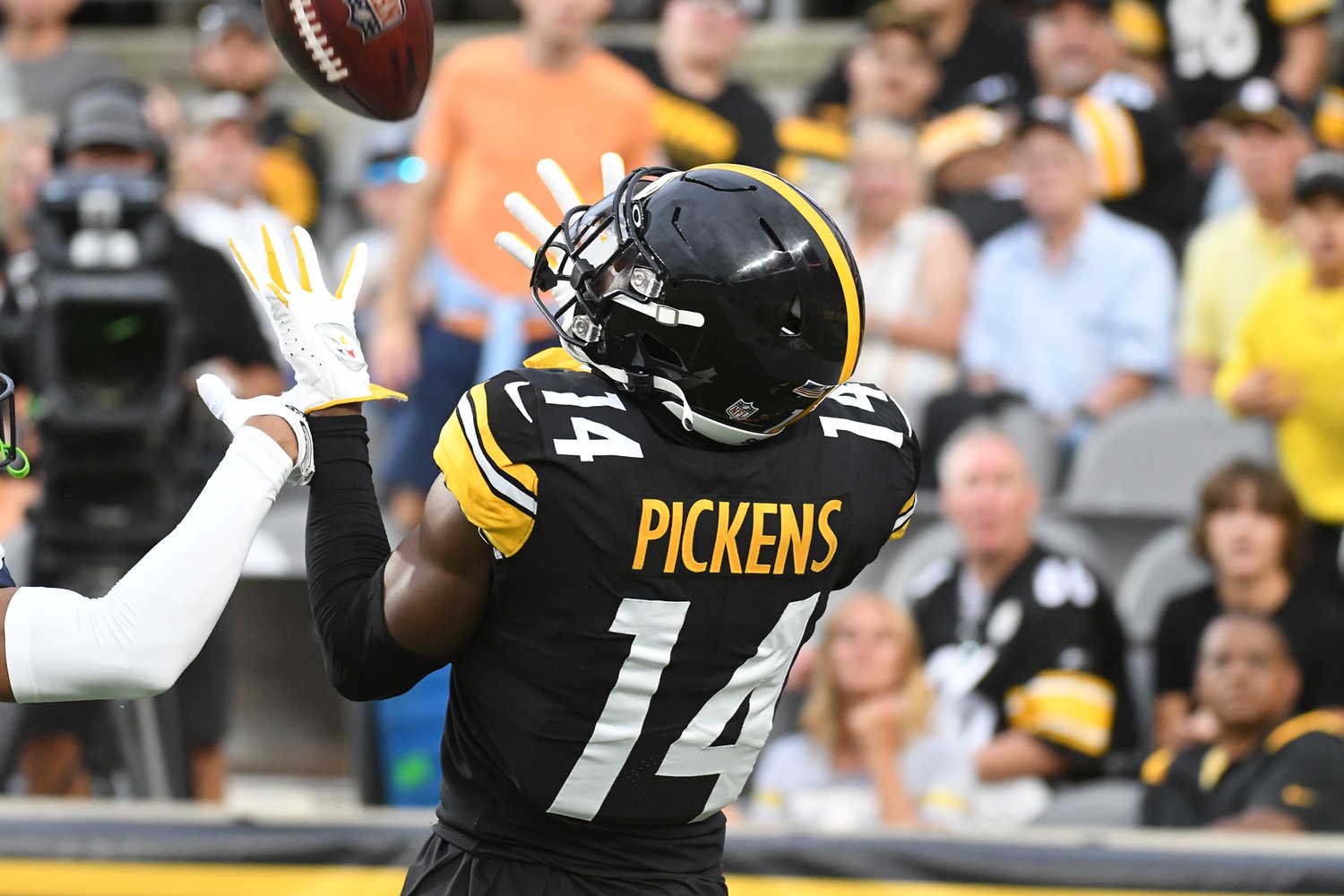 Will George Pickens Thrive With Kenny Pickett at QB?

The Pittsburgh Steelers announced that rookie quarterback Kenny Pickett will serve as their starter going forward on Tuesday afternoon. Pickett raced Mitch Trubisky in Sunday’s lowly loss to the New York Jets. Trubisky was completely ineffective, finishing 7-of-13 with 84 passing yards and an interception through just two quarters. Pickett started the third quarter and provided the Steelers’ offense with a much-needed jolt in the arm. Steelers rookie wide receiver George Pickens appears poised to thrive from Pittsburgh’s quarterback change.

Pickens immediately benefited from Pickett’s presence. The No. 52 overall selection in the 2022 NFL Draft, Pickens recorded a career-high six receptions for a game-high 102 receiving yards. It represents the first time Pickens has crossed the 100-yard receiving mark this season. Pickens was on the receiving end of a season-high eight targets. Pickens’ explosive abilities were on full display as the Hoover, Alabama native averaged 17.0 yards per catch.

Pickens has now hauled in 11 receptions on 21 targets this season. The 52.3% mark is rather inefficient, but it’s worth noting Pickens’ 75% mark against the Jets (Pickens caught six-of-eight targets Sunday) was another season-high mark for Pickens. Prior to Sunday, Pickens had only caught 41.6% of his targets. It’s another telltale sign that showcases Pickens’ chemistry alongside Pickett as opposed to Trubisky. Sunday’s target share indicates Pickens’ weekly performances have room for growth. It’s worth monitoring moving forward.

Pickens is now averaging 15.2 yards per reception. He’s creating explosive passing plays for an offense that desperately needs to threaten opposing secondaries with more consistency. Pickens is averaging 2.5 yards after catch per reception with a passer rating of 78.9 when targeted, via Pro Football Focus. Both numbers should continue improving as the season progresses. Pickens’ presence will be a helpful resource for his rookie signal-caller and vice versa.

Pickens’ route tree against the Jets was especially intriguing. Through Pittsburgh’s first two contests, Pickens had run 62 routes with vertical releases (basic go routes and fades) out of 74 total routes and 92 total snaps, via The Athletic. Pickens was afforded an opportunity to cover every blade of glass to all areas of the field against the Jets. Next Gen Stats captured a route tree that was significantly more diverse. High-low concepts freed up Pickens in space on occasion, too. The Steelers are finally letting Pickens loose.

Pickens led all Steelers wide receivers in targets. The second-place finisher was Diontae Johnson, who saw just half (four) of Pickens’ targets. Chase Claypool was uninvolved, recording zero receptions on two targets. Only Steelers tight end Pat Freiermuth was on the receiving end of more targets (nine) than Pickens was. Pickens may emerge as the Steelers’ No. 1 receiver before season’s end. It’s not as far-fetched as you think.

Pickett experienced growing pains in his first test under center, finishing 10-of-13 for 120 yards, zero touchdowns, and three interceptions. Not one of Pickett’s passes hit the ground. Pickett added 15 rushing yards and two touchdowns via his dual-threat ability. Pickett must cut down on the turnovers, but Pickens will benefit from Pickett’s willingness to test man coverage and tight throwing windows. Trubisky’s passiveness was wasting Pickens’ talents away.

Pickens’ play has improved with each passing week. We’re witnessing a rookie receiver that’s gaining confidence as he becomes increasingly comfortable executing his assignments in offensive coordinator Matt Canada’s system. His emergence is a welcomed occurrence for an offense that requires all the help it can get.