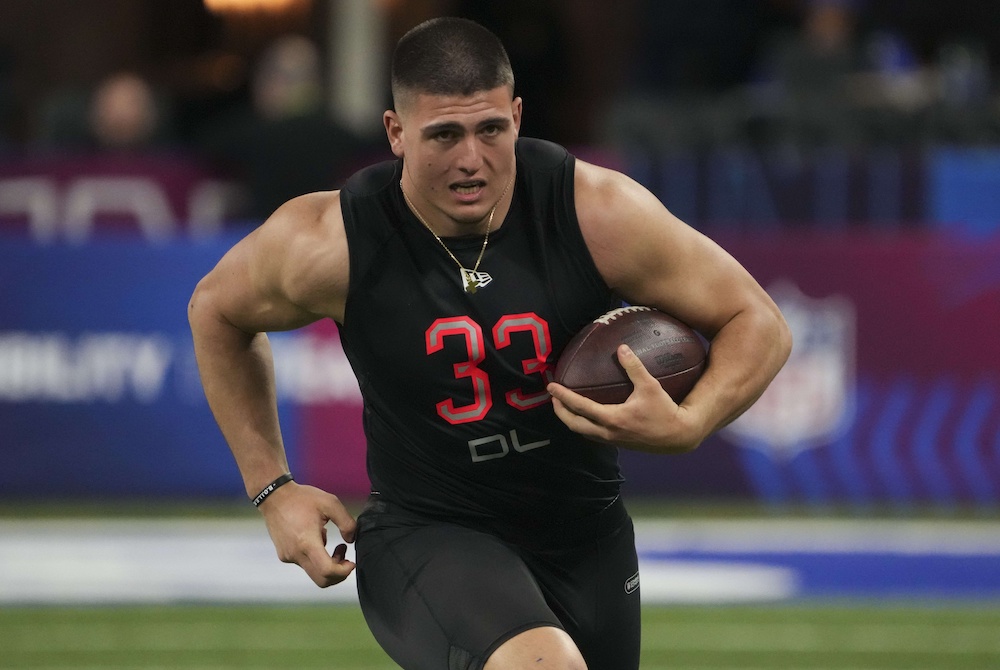 One of the more unheralded edge prospects in this year’s class, in comparison to the elite talent up top, Purdue’s George Karlaftis has seen his name kicked under the rug for much of the evaluation process. While interest has come in waves surrounding Georgia’s Travon Walker, or even Michigan’s David Ojabo pre-injury, Karlaftis’ stance has remained steady as a mid first-round selection. While he isn’t the sexiest prospect on film, failing to bend the edge with ease, nor is he entering the draft following Herculean numbers at Purdue, a talent that wins with technical refinement and power should enjoy a decreased grace period to begin wreaking havoc within NFL backfields. A throwback style of five-technique, here are a few teams that should have Karlaftis high on their edge totem pole.

After losing Chandler Jones, the Cardinals have a massive need for an impact edge rusher opposite veteran Markus Golden. Although Karlaftis’ skillset doesn’t jigsaw seamlessly with a 3-4 front – where he will be asked to play in space – with such an athletic group of linebackers around him in Isaiah Simmons and second year project Zaven Collins, I expect him to have ample opportunities to pin his ears back and get after the passer.

With two first-round selections, I wouldn’t be surprised if they either add Karlaftis at No. 13 straight up, or trade back and grab him a few spots later. In a run-heavy AFC South, adding a powerful threat on the edge not only to get after the passer, but a player that can anchor on the outside and make plays behind the line of scrimmage could be a nice fit for a Texans defense that has ranked among the league’s worst defenses the last few seasons.

Adding Ryan Kerrigan last year makes this fit ideal. Eagles faithful have grown tired of General Manager Howie Roseman using first day picks on edge talent, but when there’s a need, a move is warranted. Very similar in the type of player Kerrigan was coming out of Purdue, again, he isn’t the sexy edge prospect with elite testing numbers and highlight-reel tape but projecting his skill set and deep bag of pass-rush moves to the perimeter in Philadelphia should see him enjoy immediate success opposite Josh Sweat.

Whether Karlaftis starts opposite Chris Jones, or works in primarily as a designated pass-rusher (DPR) at the onset of his career, Kansas City would be wise to add talent at edge with quarterbacks Justin Herbert, Russell Wilson and Derek Carr set to unleash an aerial barrage on the division. Like Jones and Frank Clark, Karlaftis won’t blow you away with his speed to the outside shoulder of the tackle nor will he spin or euro-step his way around offensive tackles, but his performance ceiling remains one of the more intriguing in the class. I wouldn’t be shocked if he ends up as one of the Chiefs’ two late first-round selections despite massive needs at wideout and corner.