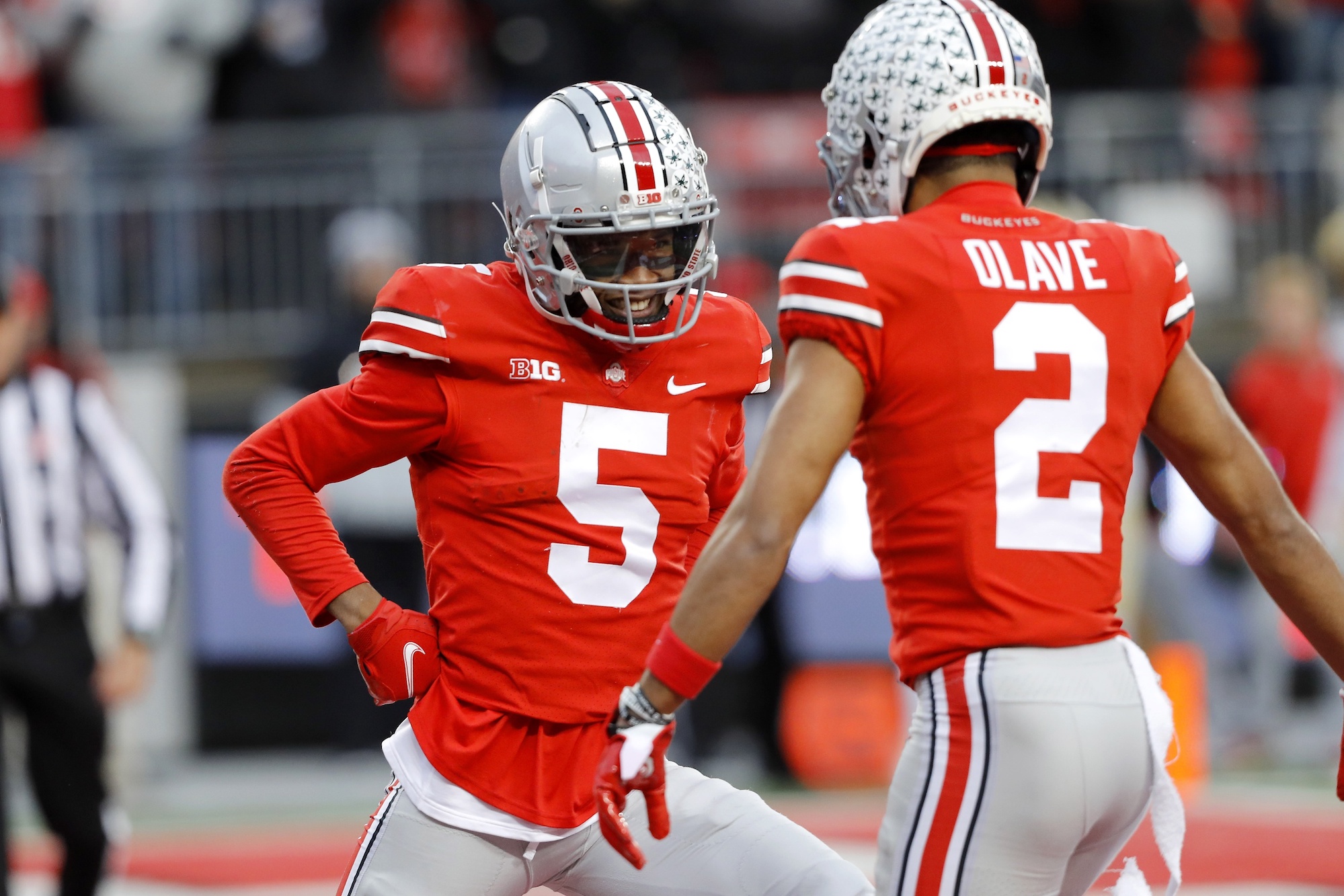 Two masters of the intricate art that is the wide receiver position, there aren’t many players in this year’s class—and in years prior—that move and flow like Chris Olave and Garrett Wilson, two former standouts for the historic Ohio State Buckeyes program. As the draft swiftly approaches, so too will each prospect’s timeline to produce come kickoff this fall.

A Buckeyes program with its footprint placed firmly within the NFL’s 32 clubs in some way, shape, or form, two of the league’s next standout pass-catchers—as much as they are similar—have presented teams with unique skill sets primed to make waves on the NFL scene from the moment their spikes hit NFL-branded turf.

A tandem of elite-tier talents set to hear their names called on night one in Las Vegas, let’s dive deeper into what makes each prospect so unique, and why teams will come calling early for their services this season.

The elder statesman of the two, had Olave come out of school last fall, he still would have been a first-round pick. Olave totaled 936 yards and 13 touchdowns in 2021, further solidifying his status in a deep pass-catching class as a day-one talent. One of the smoothest route-runners in the class, you’d be hard-pressed to find a talent in the depths of this year’s talent pool that is more ‘pro-ready’ than Olave.

Separation is the name of the game at the next level. Whether you’re aligned out at X, at Z, or in the slot at Y, while soft cushions off the LOS surely remain a part of the NFL game, what you think is free space and open land to roam on Sundays is often too good to be true. However, for the elite that are able to enter the league and understand the nuances to sit a route in zone, then dominate, stack, and win one-on-one matchups in man coverage, the grace period for a high target volume and production is extremely shortened.

We’ve seen first-year talent flood the NFL stage in recent years. From Justin Jefferson to Ja’Marr Chase, there is no time to become accustomed to your professional surroundings. For Olave’s sake, whether he lands at a spot looked upon to be the de facto WR1 or as the third-head of a well-rounded aerial attack, his deep bag of traits and experience competing and producing at the highest collegiate level for years on end has raised his performance floor and status on league-wide draft boards.

One of the most electrifying talents in the class, Wilson’s aerial acrobatic ability belongs in a Cirque Du Soleil show. If you know, you know.

Often looked upon as the Robin to Olave’s Batman this fall, projecting Wilson’s highlight-reel ability into an NFL offense should remain of high interest for teams within the first 15 selections, despite the need for bodies in the trenches for a multitude of clubs in that range. A YAC monster whose initial role should come in the slot, Wilson’s unique blend of size, speed, and unique route-running ability will see him garner a heavy amount of attention from opposing defensive coordinators from the onset of his career.

A sudden mover at the LOS to immediately create separation, Wilson’s unorthodox way of working toward open grass was fun to watch on film. Whether he’s dead-legging a corner to work inside or masking a nine-route with quick shuffles of his feet only to rapidly extend his strides and burst past the corner, those optics as a route-runner will serve him awfully well when tasked with working against bigger, stronger corners at the next level.

A water bug in space who rarely gets taken down by the first defender on scene, teams who are able to get Wilson involved early on designated touches both beyond and behind the LOS will see his game blossom into a potential true game-changing talent on the outside. A prospect who’s not afraid to stick his face in the mud over the middle of the field or seal a nickel corner or downhill safety in the run, the flaws are few and far between when it comes to Wilson and his well-rounded skill set as one of the premier pass-catchers in the class.