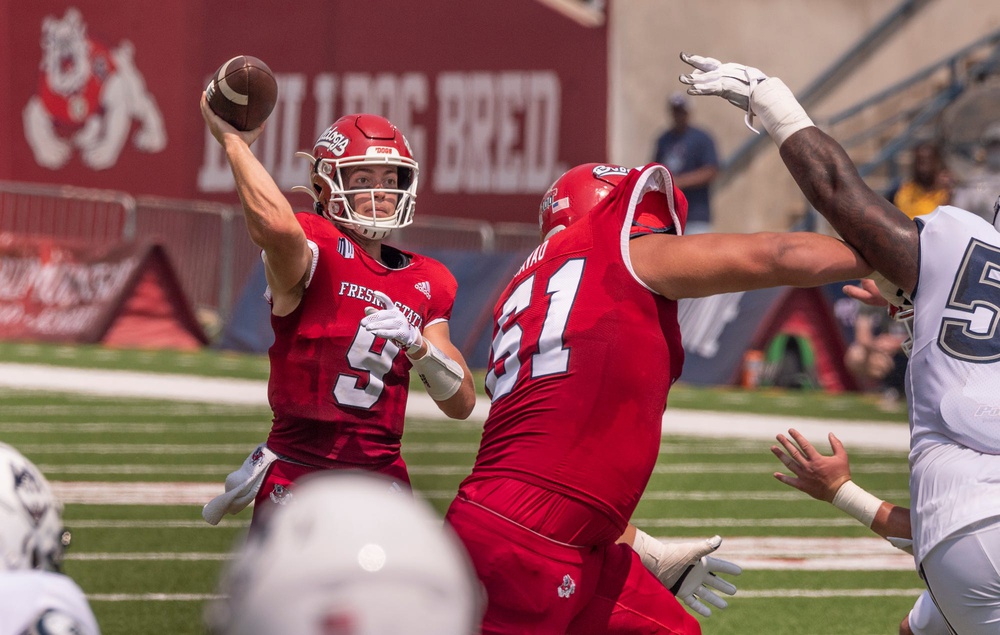 It’s officially summer scouting time and we at The Draft Network are hard at work diving into tape of some potential prospects for the 2023 NFL Draft. It’s an exciting time of the year as we get to familiarize ourselves with the best talent college football has to offer and see which players we should be keeping an eye on when the college football season rolls around. There are plenty of known commodities in the class of 2023 and from the looks of it, the quarterback position group has a chance to be special. We have the two guys at the top that everyone knows in Alabama’s Bryce Young and Ohio State’s CJ Stroud, both of whom are projected to be top ten picks in next year’s NFL Draft. After these two prolific signal callers, there are a number of quarterbacks who have a ton to offer and could potentially hear their name called early. Players such as Kentucky’s Will Levis, Florida’s Anthony Richardson, Boston College’s Phil Jurkovech and Coastal Carolina’s Grayson McCall have all shown flashes of brilliance at the quarterback position. There is, however, one player I am particularly intrigued by and a player who I predict will be a polarizing prospect throughout the evaluation process and that’s Fresno State’s Jake Haener.

One of the biggest storylines of the 2021 college football season was the emergence of quarterback Jake Haener, who entered the 2021 season as a quarterback most people hadn’t heard of. He was coming off a successful campaign in 2020 where he threw for 2,021 yards, 14 touchdowns and five interceptions while completing 64.7% of his passes. He proved that he belonged that season as a first-year starter for the Bulldogs and silenced many of his doubters. Haener transferred to Fresno State in 2019 from the University of Washington after he lost out on the starting job to Jacob Eason. The success he enjoyed in 2020 was just a glimpse of the player he could become, and he took his game to the next level in 2021.

Haener improved upon his first year and quickly emerged as one of the best quarterbacks in the country last season. He threw for 4,096 yards, 33 touchdowns against just nine interceptions, while also completing 67.1% of his passes. He led the Bulldogs to a 10-3 record with an impressive win over power-five school UCLA. Haener had developed many fans in the national media and even in the NFL where scouts and general managers appreciated the way Haener played the game. He reportedly had earned an invitation to the Reese’s Senior Bowl should he declare for the draft but ultimately decided to spurn the draft and return for his senior season.  With Haener electing to play another year of college football, the question is now how much can he boost his stock in the eyes of NFL evaluators?

I recently dove into Haener’s tape and came away very impressed.  Haener is an excellent athlete for the position and utilizes his athleticism in a variety of different ways. He is outstanding in the pocket and can slide and maneuver around pressure while keeping his eyes downfield. He uses his athleticism to escape the pocket and extend plays and he shows very good ability to complete accurate throws on the run. Haener has a tight quick release and puts good zip on the ball. He throws with excellent accuracy, timing and touch – particularly in the short and intermediate areas of the field. He makes good decisions with the football and is in full command of the offense. Haener displays rare physical and competitive toughness and is best in the most crucial moments of the game. The word “gamer” fits him like a glove.

The issue for Haener as it relates to his projection to the NFL is the fact that he is listed at 6-foot-1 and just 195 pounds. His slight frame and marginal size are massive concerns and are far below average for a starting NFL quarterback. With his lack of size, injuries will be a concern for him at the next level as well as his ball security which has already been problematic in college. He also lacks elite arm strength when it comes to pushing the ball vertically down the field and his ball will flutter at times. His lack of top end physical attributes will certainly knock him down boards, but his positives far outweigh his negatives for me.

Haener isn’t the only small quarterback in next year’s class that will be under scrutiny. As I mentioned above, Alabama’s Bryce Young is widely expected to be a top 10 pick and he is listed at just 6-foot and 194 pounds – almost the same size as Haener. While I am not saying that Haener is as talented of a passer as Young, I just believe that their talent is close enough that if Young is a top 10 pick, Haener should at worst go in round two. With a whole season of college football left to be played and an entire evaluation process to unfold, it will be fascinating to see how Haener’s stock shakes out. I just know he has a fan in me.