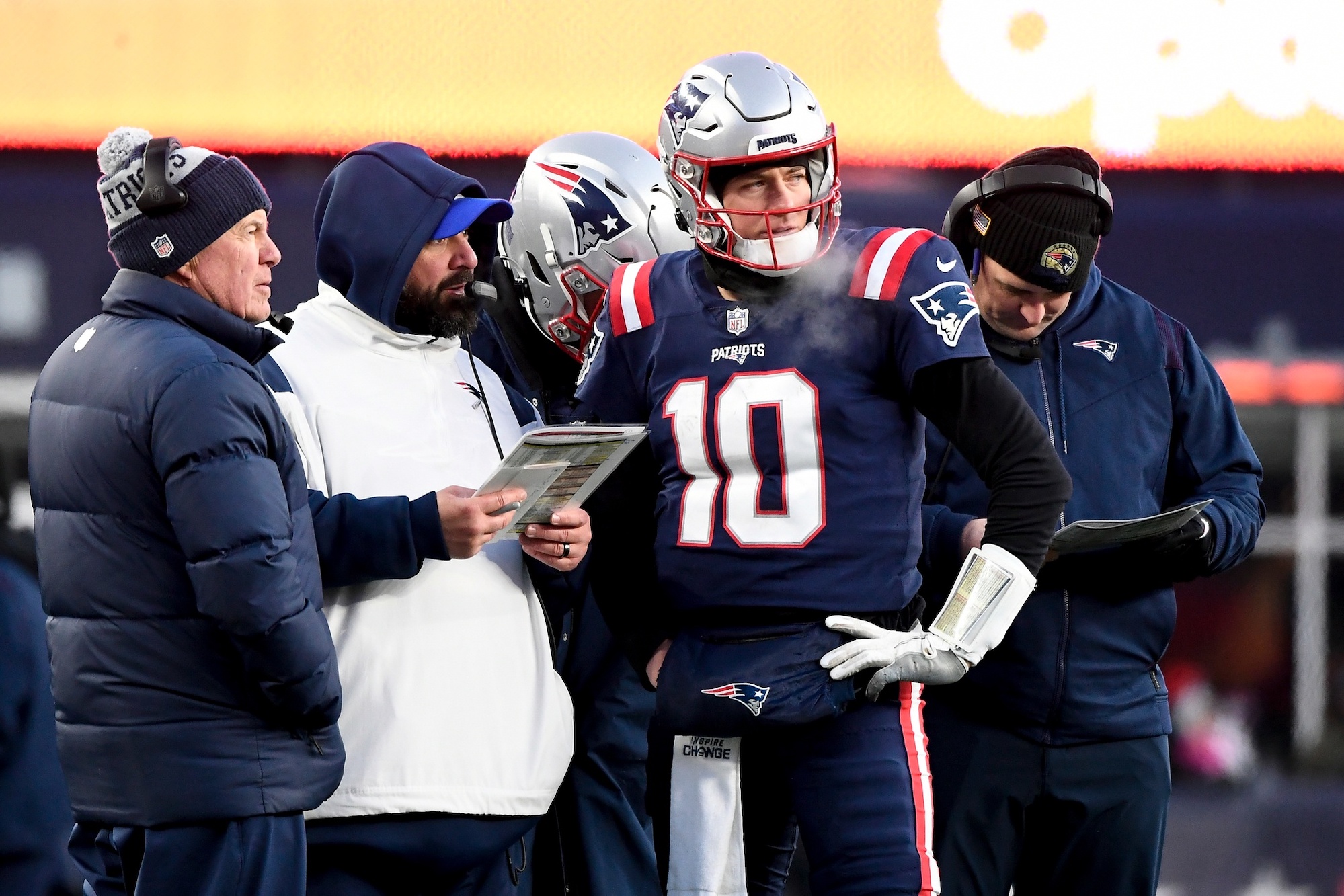 For much of the 2022 season, the New England Patriots looked like a jumbled, discombobulated mess on offense. First-time offensive coordinator Matt Patricia looked in over his head as a play-caller, while Mac Jones seemed frustrated to the point of throwing temper tantrums in games.

A unit that largely retained the same personnel from the 2021 season, fell off a cliff, going from ninth to 24th in offensive DVOA, 10th to 24th in EPA/play, and sixth to 17th in points per game. Jones saw his development stunted in year two; his ranking of 14th among quarterbacks in EPA/play and eighth among quarterbacks in success rate fell to 26th and 28th, respectively.

Charting a course back to offensive respectability has to be the first priority for the Patriots this offseason. There is a case to be made this is the most crucial offseason the organization has faced in recent memory. From very real ownership pressure to win a playoff game sooner rather than later, to the practical aspect of figuring out whether the organization has something in a quarterback entering his third season on a rookie contract, to maximizing a defense that played at a championship-caliber level in 2022 (the Patriots ranked third in defensive DVOA this season), the root of New England’s offseason stems at getting the team’s offense back on track. Here is a plan for doing so.

We’re off to a great start! The Patriots announced in a statement that they are going to hire a real offensive coordinator for the 2023 season. However, it bears repeating what a charade Bill Belichick put the world through in 2022 by entrusting his offense to Matt Patricia and Joe Judge, who had no experience coordinating an offense and whose most recent experience before their failed head coaching gigs had been as New England’s defensive coordinator and special teams coach, respectively. When viewed through this lens, the 2022 Patriots offense was doomed from the start.

The brain drain the Patriots coaching staff suffered in 2022 was real. Beyond losing Josh McDaniels, one of the league’s best offensive minds, the team lost running backs coach Ivan Fears, its longest-tenured positional coach (31 years), to retirement. Positional coaches Carmen Bricillo (offensive line), Bo Hardegree (quarterbacks), and Mick Lombardi (wide receivers) followed McDaniels to Vegas. Hiring a coach with real offensive coaching experience at the NFL level and engaging in a collaborative process with Belichick to hire a staff should bring the offense to new heights in and of itself in 2023.

Trent Brown and Isaiah Wynn were supposed to be bookends for the Patriots in 2022. Instead, injuries and inconsistent play from Brown and a steep decline from Wynn saw tackle become a weak point of New England’s offense last season.

Wynn is heading for free agency and seems unlikely to re-sign. Brown carries an $11.4 million cap hit next season; releasing him would save over $10 million on the salary cap, but having to replace two tackles in one offseason is a tall task. Brown is an extension candidate to lower his cap hit, but the Patriots have more than enough salary cap space to simply keep his contract on the books and hope he performs at his 2020 level in a contract year.

The Patriots must prioritize finding a tackle in the first round of the NFL Draft; it is both a short- and long-term need for the organization. Even taking two tackles in the first four rounds of the draft should not be out of the question considering the instability the team had at swing tackle this past season and Brown’s contract situation.

The Patriots have acquired veterans Nelson Agholor, Jonnu Smith, Hunter Henry, Kendrick Bourne, and DeVante Parker over the past two offseasons. Production from this group has largely been underwhelming, with homegrown star Jakobi Meyers projected to sign a contract larger than all of them when he hits free agency in March. Now is the time to decide who stays and who goes from this group.

Agholor will hit free agency and is not expected back with the team. Smith’s contract is impossible to move off of, and he is still useful on a team that primarily deploys 11-personnel packages. Henry is a no-brainer cut; while more productive than Smith, releasing him would save $10 million in cap space and would clear a glut of over-allocated resources at the tight end position. Bourne and Parker represent interesting cases; releasing them would clear $5.5 and $6.2 million against the cap, respectively. The Patriots should not keep both players on their 2023 team; they should keep the player who best complements the player acquired in Step Five of this plan and release the other.

Step Four: Reward Your Own

Meyers has stood out with New England’s aforementioned offseason acquisitions looming over him, making more money than him, and vying to take his job over the past two years. He has been the team’s best receiver since 2020 and plays arguably the most important role in the team’s passing game as the slot receiver (yes, even though he doesn’t look like Julian Edelman or Wes Welker). Meyers has undeniable chemistry with Jones. Removing him from the offense would represent another hindrance to the quarterback’s ability to develop successfully.

Meyers won’t come cheap (on the low end, his contract will approach $12 million APY; on the high end, it may top Hunter Renfrow’s $16 million APY), but the Patriots will have an abundance of cap space this offseason. Meyers should be considered a building block for the team moving forward, and his return as a proven piece in an offensive system that has proven difficult for some of the aforementioned (expensive) veteran imports to master is imperative.

Step Five: Acquire a No. 1 Receiver

Patriots teams with offenses of a similar caliber have needed a complete overhaul at the skill positions. The 2020 Patriots, for example, boasted a receiving group littered with the likes of Damiere Byrd, N’Keal Harry, and Ryan Izzo. They needed an injection of talent, everywhere. This New England offense does not need to overhaul the skill positions. If anything, this plan suggests consolidation at the wide receiver and tight end positions. In 2022, the Patriots had too many bodies they needed to play at wide receiver and tight end. And yet… they were one of the worst offenses in the NFL. Make it make sense!

New England’s complement of skill position players over the past two years has featured solid yet unspectacular supporting pieces who would be better served with the likes of a No. 1 receiver who could draw coverage away from them and restore the depth chart to its natural order. In the NFL, a rising tide lifts all boats. A rising tide in the form of a No. 1 receiver, in this case, would lift the likes of Meyers, Smith, Tyquan Thornton, and most importantly Jones to new heights.

The Patriots will not find that player in free agency this year; the free-agent wide receiver class is weak. Despite that, a few trade candidates could be what the Patriots are looking for. DeAndre Hopkins, a player who Belichick has expressed admiration for in the past, stands out as the best fit. He should not require high-end trade compensation, is an excellent complement for Meyers, and the Cardinals have already been rumored to be interested in trading him (new GM Monti Ossenfort is a former Patriots front office employee). Other names who could be had in a trade include Mike Evans (if the Buccaneers opt to start a rebuild), Jerry Jeudy (why not reunite him and Jones?), and Tee Higgins (though I think he may be too pricey and cost the Patriots a chance at a top tackle in the draft).

With all the focus on the offense and Jones’ regression, it’s easy to forget that the Patriots found a gem and potential fulcrum for their offense in Rhamondre Stevenson. Stevenson ran 210 times for 1,040 yards (5 yards per carry) and five touchdowns in 2022, adding a team-leading 69 receptions for 421 yards and one receiving touchdown.

Stevenson has shown himself to be a player worthy of a true workhorse role, a rarity in today’s NFL. However, there is a fine line between keeping your best player on the field and feeding him touches and running him into the ground. The Patriots, who trotted Stevenson on the field for over 75% of the team’s offensive snaps in seven games last season, should be mindful of this and aim to take an approach that preserves Stevenson’s health for the stretch run in the 2023 season.

Running back Damien Harris, Stevenson’s current 1B in the backfield, will likely hit free agency in March. Assuming he is too expensive to bring back, the Patriots should make it a priority to find a player they are more comfortable using situationally than 2022 fourth- and sixth-round picks Pierre Strong and Kevin Harris, who barely saw the field for the team in 2022. Leonard Fournette, a likely cap casualty in Tampa Bay and a player the Patriots have had an interest in twice in the past, could be a cheaper option than Harris who brings some added receiving chops (with the bonus of not counting against the compensatory pick formula).

The Patriots are facing their most important offseason in many years. At the same time, they are not facing a gargantuan task akin to the one they faced in 2019 or 2020 when they effectively had to overhaul their offensive personnel overnight.

The skeletal outline of a good offense on this team exists. We saw it, somewhere around 12 months ago! Adding pieces at positions of need, be it in the draft at tackle, on the free agent periphery at running back, or via trade at wide receiver, would go a long way toward bringing the offense back to respectability.

Oh, and having a real offensive coordinator is going to help, too.