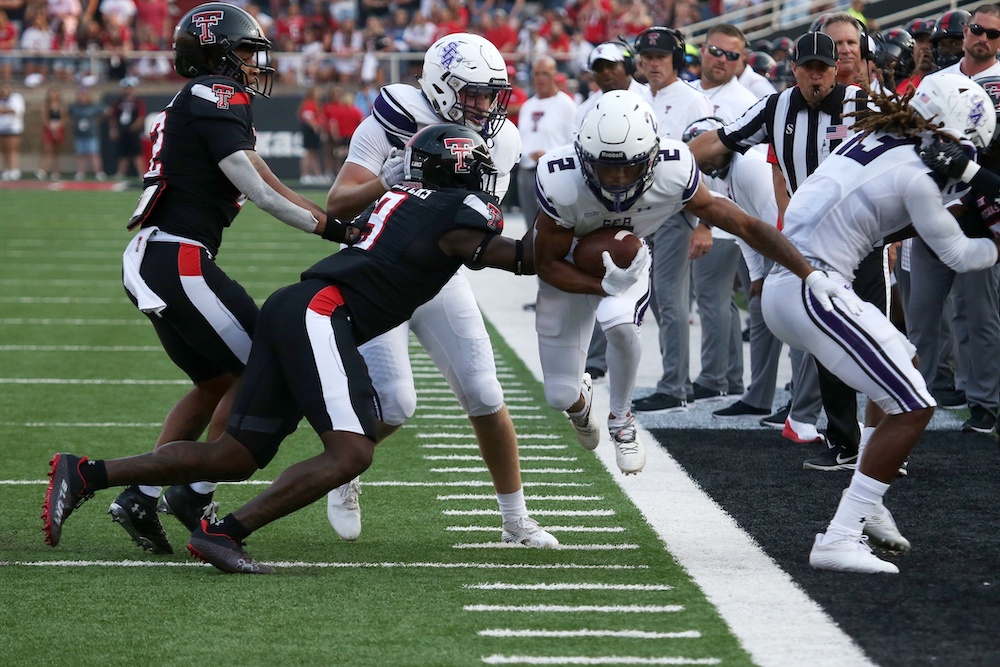 FCS Offensive Players You Should Know in 2022

Although the glitz and glam of the country’s Power Five programs headline annual NFL draft conversation, talent stems far beyond the FBS. From Division II-AA, Division II, Division III and onward – if you can play, the NFL will find you. When it comes to the following FCS standouts, while all of them may not be draft eligible just yet, don’t get caught up in helmet decals, either way. These guys are worth watching.

While San Francisco 49ers fullback Kyle Juszczyk remains the poster child for a dying fullback breed, Luepke possesses an extremely intriguing skillset that should translate well to the NFL game. A battering ram in the run game that has the necessary athletic profile to make plays in space, he totaled three touchdowns in the first half of the FCS title game last fall, and has averaged a touchdown once every 10 touches (20 overall).

The son of Tigers head coach and NFL Hall of Famer Deion Sanders, the dual-threat signal caller should thrive this fall. Armed with five-star and No. 1 overall recruit Travis Hunter and four-star talent Kevin Coleman as new additions on the outside, Sanders should see a productive season. He already had 30 touchdown passes against just eight interceptions last fall, which highlighted his freshman season.

A fluid, big-bodied target who has reminded many of Philadelphia Eagles tight end Dallas Goedert during his time as a Jackrabbit, Kraft led all FCS tight ends in receptions last season (65) and is in line for an even bigger 2022 campaign. A well-rounded prospect who makes a habit of ragdolling smaller defenders in the run game, put a bold dot next to his name as an intriguing talent to follow this year.

Scouts got a great look at Curtis after studying Patriots’ first-rounder Cole Strange last year and now Curtis could become the headlining offensive lineman out of the FCS in 2023. A massive man the size of a small townhouse, Curtis started all 11 games at right guard, earned first-team All Southern Conference honors (for the second straight year) and helped pave the way for a Mocs ground game that averaged over 200 yards per game.

Although the transfer of quarterback Cameron Ward (Washington State) could limit Grimes from recapturing his 2021 success, he remains the focal point of the Cardinals’ offense and should once again prove to be one of the FCS’ premier perimeter target hogs. In 12 games, Grimes led the team in receptions (87), receiving yards (1,145) and tied for the nationwide-lead in touchdowns with 15.

The Bobcats had two players drafted (Troy Anderson and Daniel Hardy) in April and Ifanse could be next in line. With 3,461 career rushing yards, he is primed to become the program’s all-time leading rusher and possesses traits that could immediately see him find success at the next level. A second-team All-American last season, Ifanse is the headlining ball-carrier in the FCS and his physical brand of football makes it awfully easy to like his game.

A former Texas Longhorn commit, Wilson should immediately assert himself within the Tigers offense as a go-to weapon in the passing game. He’s a dominating presence with the ball in the air but he remains extremely raw when it comes to his short-area quickness and ability to mask routes at the top of his stem. However, with elite hands and a massive catch radius, Wilson checks off a ton of boxes as a true freshman and could become the next Tiger to be drafted when the 2025 draft rolls around.