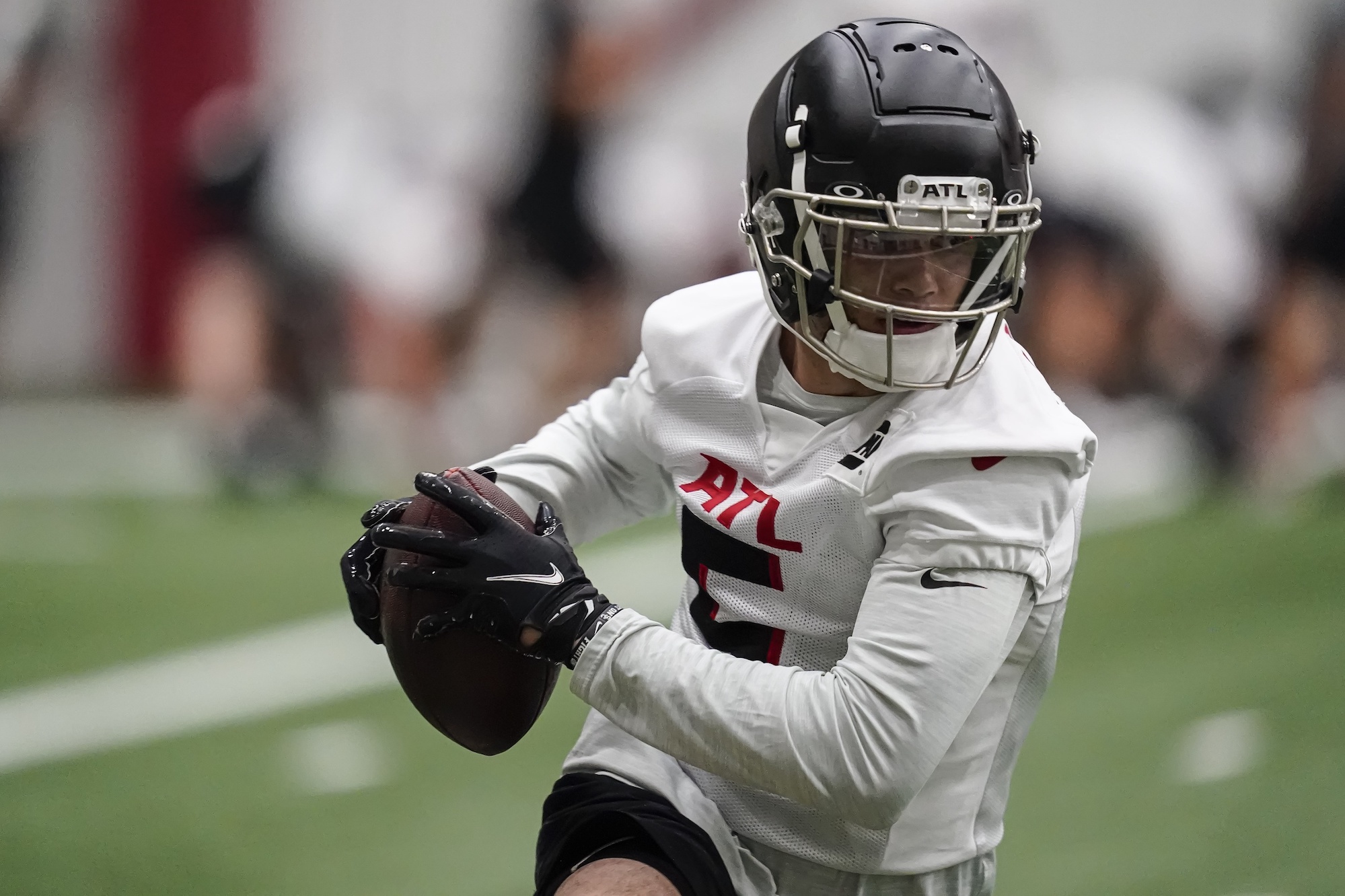 Falcons Have Brighter Future Than You Think: Blueprint of a Rebuild

Football is a results-oriented game, but for a handful of teams in the thick of a rebuild, keeping eyes up toward the horizon remains paramount. Usually with fresh faces aplenty in both the front office and in between the hashes, revamping a roster is often looked upon as a multi-year project. The onus on head coaches to not just keep the ship afloat, but bolster it back up without an extended grace period is one of the toughest jobs in sports. In this mini-series, we’ll dive deep into the architecture of a few teams currently in the midst of working their way back to relevancy and the potential timeline to success for each franchise. This edition is about the Atlanta Falcons.

In what will be a rebuilding year from the ground up, this is a long trek up a steep slope for General Manager Terry Fontenot and Head Coach Arthur Smith. With franchise cornerstones elsewhere in Matt Ryan (Indianapolis), Julio Jones (UFA), and Calvin Ridley suspended for the 2022 campaign, expectations remain at a minimum for what is expected to be a two-man race for the NFC South crown this fall. However, while every rebuild inherently ushers in years of disappointment and little to rally around, the Falcons’ additions this offseason have raised a banner of optimism due to a new era with Marcus Mariota and Desmond Ridder set to compete for starting snaps this fall.

On offense, it starts with Kyle Pitts. One of the league’s premier offensive weapons, he’s still just 21 years old, and with the high-flying Drake London now in the fold, the pieces, at least on paper, are beginning to jigsaw together nicely in Atlanta. And although the loss of Ridley this fall will heavily hamper the Falcons’ juice on the outside, the onus on Pitts and London, two respective top-10 selections, to immediately produce will help them further blossom into productive talents in the present and in the long-term future.

Defensively, however, is where this roster should excite Falcons faithful near and far. In a draft loaded with impact defensive talent, while the selection of London drew headlines, the Falcons and Fontenot came away with three excellent front seven defenders worth highlighting, headlined by the selection of Penn State’s Arnold Ebiketie.

After totaling a league-worst 18 total sacks last fall, 11 worse than 31st-ranked Philadelphia Eagles (29.0), Ebiketie should give Atlanta an immediate threat along the front four. After re-upping Grady Jarrett to provide the push on the interior, a talent like Ebiketie—who was dominant at times at the Senior Bowl—will be thrown into the NFL fire right away whether he likes it or not. In a rebuild, it’s really the optimal scenario for the talent-hungry Falcons defense. And while teams like Green Bay and Kansas City initially looked like good landing spots for the former Nittany Lion, in Atlanta, with no expectations of a division title, the pressure is off. Put Ebiketie on the edge, allow him to pin his ears back and get after the passer from the opening snap.

Just 20 picks later, the Falcons checked off a ton of boxes in one player by selecting Montana State do-it-all defender Troy Andersen—one of the most polarizing athletes in the entire class. Versatility… it’s the adjective that swamped Andersen’s evaluation all cycle long. A talent with All-America honors on both sides of the football, he’s one-of-one in this year’s deep rookie talent pool. A quarterback, turned running back, turned fullback, turned linebacker, the Dillon, Mont. native checks all the boxes as a potential impact player with scheme versatility on Sundays.

The Big Sky Conference Freshman of the Year in 2017, aligning at both outside linebacker and in the backfield, he switched to quarterback in the spring leading up to the 2018 season. While the transition usually welcomes a slew of speed bumps that can take months, if not years, to overcome and become comfortable enough to begin captaining an offense, his prep background as a two-time All-State signal-caller masked any limitations he had under center. While he went on to earn All-America honors once again that year and the following fall (2019), Andersen has made the switch back to the defensive side of the ball for good and has everything under the hood to become a premier defensive chess piece.

Named the Big Sky Defensive Player of the Year this past fall and a finalist for the Buck Buchanan Award—given annually to the FCS’ top defensive player—Andersen provides an intriguing mix of violence, range, and football IQ from his days as a quarterback to read and dissect plays before they happen. An outstanding blitzer off the edge and through the A and B-gaps as a ‘MIKE’ linebacker in Montana State’s 4-2-5 alignment, we could also see him slot on the outside due to his innate ability to consistently fire downhill and win in the open field against the run. While he will need to beef up his current 235-pound frame if he eyes any type of role as an outside linebacker, his versatility and ability to do it all—and do it well—is truly second to none. He is the definition of a ‘Swiss army knife’ who could see himself work into a two-way role similar to Taysom Hill on the New Orleans Saints, who’s spent time at quarterback, tight end, running back, linebacker, and as a gunner on special teams.

After grabbing the aforementioned Ridder in the third round, the addition of Western Kentucky’s DeAngelo Malone—another Senior Bowl standout—represented one of the sneakier additions to round out Day 2. An extremely twitchy edge talent who’s a “first off the bus” type of athlete with elite athletic intangibles, he was someone that opened scouts’ eyes throughout the week in Mobile. He’s a unique combo of speed and length who understands how to run the arc and win right now.

While his performance ceiling remains shallower than that of Ebiketie’s due to his foundational explosiveness at 5-tech, he’s a heck of a talent that should only get better with a healthy allotment of snaps. After totaling 32.5 sacks in five seasons with at least 6.0 sacks in each of the last four campaigns (11.0 in 2020), as good as Malone’s floor is, he and Ebiketie could become an awfully nice tandem of youth-infused pass rushers for Defensive Coordinator Dean Pees’ athletic front seven in the years to come.

The additions don’t include corner A.J. Terrell, who consistently is overlooked when discussing football’s top secondary talent. Dominant in man-to-man coverage where he uses his 6-foot-1 frame to swallow opposing wideouts, the third-year talent in Terrell has a high level of field awareness and understands how to use the sideline as an extra defender when left alone on an island. And when in zone, Terrell’s aggressiveness and high-level football IQ allow him to consistently work downhill toward opposing receivers who look to break off routes in what looks to be open space. An alpha at the catch point similar to the league’s elite offensive weapons, Terrell has a knack for playing through the hands of targets and is as smooth and silky an athlete as you’ll find.

Truly, there’s a litany of reasons to remain positive in what may be another down year in Atlanta. It takes time, sometimes longer—much longer—than other organizations, but the Falcons are on their way up. Smith’s improving arsenal should allow Atlanta to remain competitive, and, moreover, potentially surprise a few teams this fall as their youth-infused core blossoms into a unit to become familiar with in the coming seasons.