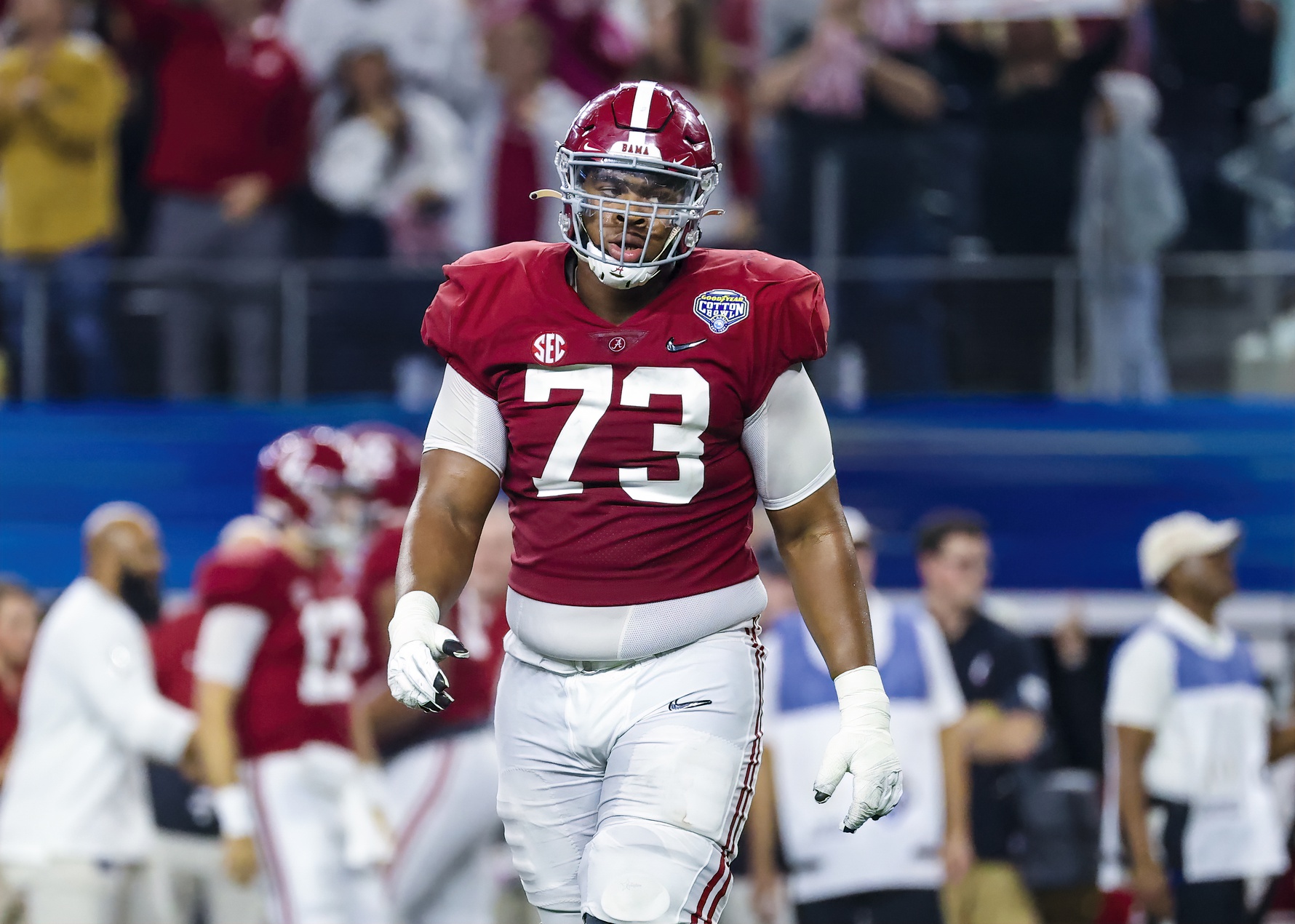 Why Evan Neal Should Be No-Doubt No. 1 Pick

It can be hard to figure out what player will go first overall in a draft class like this year’s. It’s a class with no definite QB1 for one, and the Jacksonville Jaguars, who hold the first pick, don’t need one anyway. They do have many other spots to fill, offensive tackle and edge rusher among them in a class stacked with talent at both positions. I’m here to say that it shouldn’t be complicated. Alabama offensive tackle Evan Neal has to and will be the first overall pick in the 2022 NFL Draft. One of the first things that stand out about Neal is his body. He was listed at 6-foot-7 and 350 pounds at Alabama, but at the NFL Scouting Combine on Thursday, he said he most recently weighed in at 336 pounds. Seeing what that looks like on Neal is incredible. Those 336 pounds might be 100% muscle. https://twitter.com/BigDuke50/status/1499403807641550857 “I’ve always just been a big guy,” he said Thursday. “I’ve never looked at myself as having a true weight problem.” Another thing to look at is Neal’s abilities as a player. There’s a reason he’s BetOnline’s odds-on favorite to be the No. 1 overall pick. His massive frame and the power he can generate allows him to push defenders off the line of scrimmage with ease when he’s run blocking. That large frame is also a huge asset in the passing game, as his length and mass force defenders to fight their way around him, keeping the quarterback protected. As it stands now, Neal is a true plug-and-play day-one starter at the NFL level. Not only are his skills among the best of any tackle in this class, but he also brings versatility to the table. Neal began his career at Alabama playing left guard, in his sophomore year he was a right tackle, and this year he kicked out to left tackle. When asked what he brings to the table, he pointed out that versatility—how he can play any position on the offensive line besides center—as well as the game experience he got at Alabama with 39 collegiate starts. Because of all that experience, he isn’t too worried about where exactly he’ll play at the next level. “I’ll play wherever I’m asked. I see myself as a tackle for sure at the NFL level, but I’ll do whatever my team needs me to,” he said. So Neal’s got the body and the skillset to make it at the next level, but what really makes him first overall pick material is his preparation and commitment to getting even better. The Florida native was a film nut during his time at Alabama. “Coach would basically give out these film eval sheets, and I’d study third-down pass-rush tape, and I’d log the guy’s alignment, I’d log his stance, I’d log his first move, his counter move, and kind of things like that,” he said. With that kind of preparation, it shouldn’t be any surprise that Neal had so much success on game days. He practices against the best of the best—*cough* Will Anderson *cough*—and he is always preparing for his next matchup. He’s one of the top prospects of the class, but he doesn’t lean on his athleticism and size exclusively to win matchups. Looking for things to improve and not getting complacent with one’s current ability are also important things for future NFL players to recognize. Neal pointed out that he had a tendency to tighten his base which would lead to missed blocks in games. He said he worked on building a stronger base and improving his body control in recent months to prepare for the draft as well as playing at the next level. It’s the formation of good habits like watching film and self-assessment at the college level that will translate well to being a pro. They’re things that take him from being a top prospect to being worthy of the first pick in the draft. This year’s first pick for the Jaguars should be just as much of a no-brainer as it was last year. Neal has the body, the athleticism, the attitude, and the habits to be a star in the NFL. He has to be this year’s first overall pick.