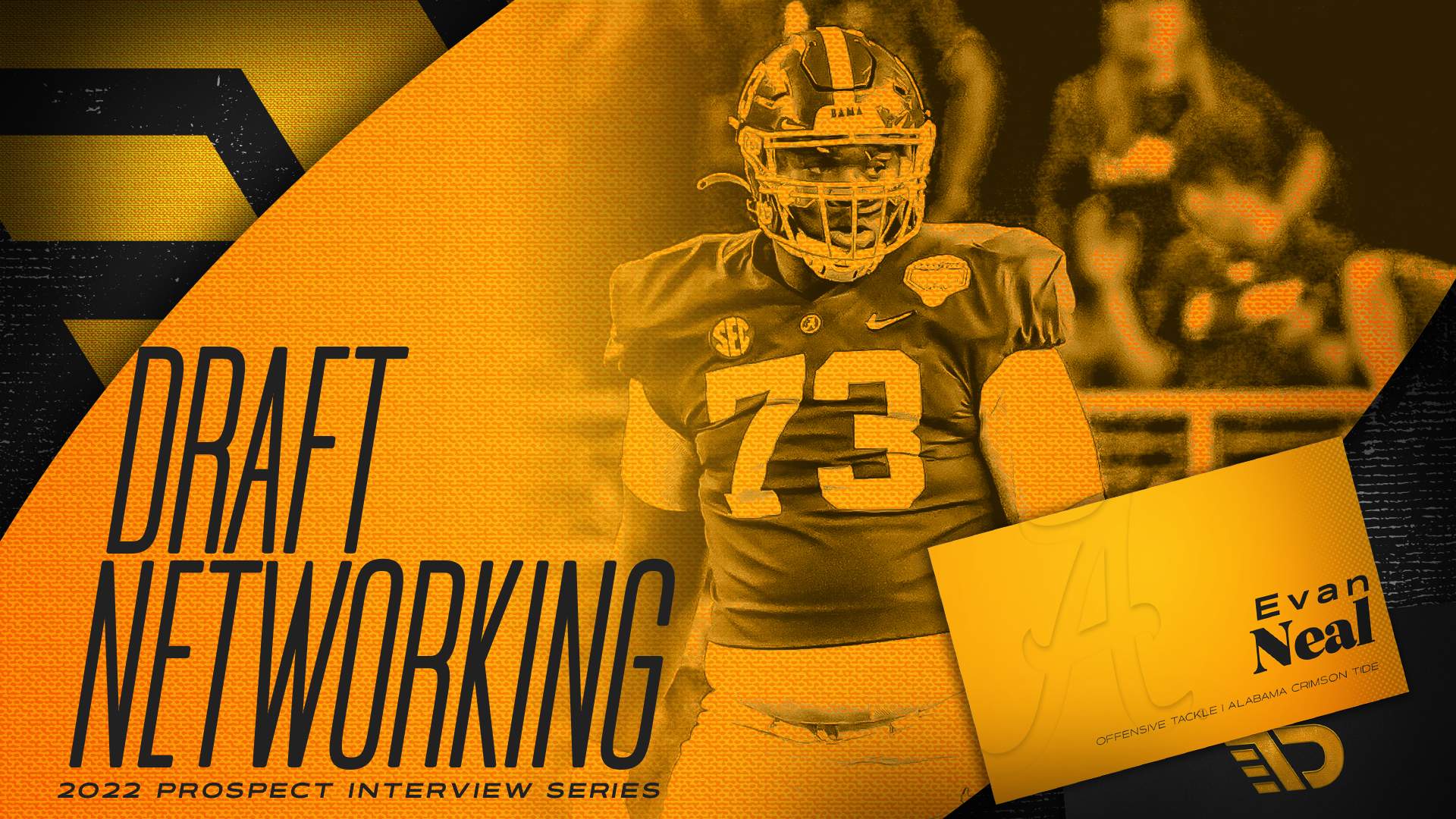 Alabama’s Evan Neal has an excellent chance to become the No. 1 overall player selected during the first round of Thursday’s 2022 NFL Draft. Neal’s ability to play multiple positions across the offensive line makes him a red-hot commodity. Above all, Neal projects as a plug-and-play starter at either left or right tackle after gaining an abundance of experience at both positions at the top-ranked program in the nation.

Neal was outstanding throughout 2021 while manning the blindside for Bryce Young and the Crimson Tide. Neal possesses rare size for the position and he’s extremely mobile despite being the owner of a physically imposing frame. Neal’s advanced hands and quick feet in pass protection often allow him to mirror opposing EDGE rushers on a snap-by-snap basis. No prospect is ever a finished product, but Neal is certainly capable of starting for an NFL franchise immediately.

Neal recently spoke exclusively with The Draft Network regarding how his experiences at Alabama helped prepare him for the next level, what allowed him to earn a starting job as a true freshman, the major differences between playing the tackle and guard positions, his overall identity as a blocker, how he handles speed differently from power in pass protection, and so, so much more.

JM: To be named a team captain at a program like Alabama is no joke. What did that mean to you ahead of your final season in 2021?

JM: You depart the program with more than 40 career starts under your belt. How do you think having that much experience at the best program in the nation helped prepare you for the next level?

EN: I feel like it helped prepare me tremendously. I came in at Alabama and I played early. I played against top-notch competition from a young age. That’s for sure. I know what it’s like to be dependable. I came in and I had to play early and learn on the fly. I understand exactly what that’s like. It’s going to help me a bunch as a rookie moving forward. I’m taking those things with me to the next level.

JM: That brings me to my next question. You settled at left guard in 2019, making 13 starts as a freshman. What do you think it was about your game that allowed you to contribute from such a young age? It’s especially impressive given that you did it at Alabama.

JM: Having started games at right tackle, left guard, and finally left tackle in 2021, you’re extremely versatile. I feel like you’ve really settled in at left tackle, but where do NFL teams see you playing at the next level?

EN: I’d like to think that I will probably be playing left or right tackle at the next level. Shoot, I’m prepared to play wherever an NFL team asks me to play though. I’ll line up anywhere.

JM: What are the biggest differences between playing tackle and guard? I want you to draw from your own personal experiences.

EN: The biggest thing is that everything happens a lot faster at guard. I can definitely say that with certainty. In pass protection, for instance, you basically have to set, punch, set immediately because everything happens and moves so fast in the trenches. At tackle, the range is different, and so is the timing. The set angles have to be approached with a bit more patience before I throw my strike.

JM: When we turn the tape on, we see a blocker with a massive frame. You have the power to move defenders off the line of scrimmage. How would you describe your identity as an offensive tackle?

EN: I’m a guy that comes in and does his job first and foremost. I compete hard, I play hard. I’ve always done everything I can to contribute and help the team. I love keeping the quarterback clean and upright in the pocket. I’m also here to open up lanes for my running back to run through. I try to be dominant.

JM: You were certainly dominant on tape. What can you tell me about the schemes Alabama ran throughout your three years as a starter, and what your coaches asked of you?

EN: In the run game, we ran a lot of gap schemes, a lot of power. We ran some inside zone and outside zone. We primarily ran a lot of six-man protections in the passing game. We ran some five-man protections as well. Personally, I love those outside zone plays, those stretch zone plays where I can just open up and reach that outside C-gap to help us seal the edge. I also love those power plays in our gap scheme where I had to down block. Those are some of the plays that I really enjoyed.

JM: I always love hearing about plays an offensive lineman enjoys running. What were practices like at Alabama? You’ve technically practiced against a bunch of NFL defensive linemen, and you’ve been coached by NFL coaches as well.

JM: It sure is. What’s it like playing for coach Nick Saban? What’s the attitude like in the locker room?

EN: He’s all business. Coach Saban runs his team like an NFL organization. He expects you to do your job, and to do it well. He definitely prepared us for the next level. I can say that with certainty.

JM: Would you say your game is developed in pass protection, or as a run blocker at this point in time?

EN: At this point in time, I would definitely say as a pass protector. I have the unique ability to be able to recover if I ever get off balance and things of that nature. In the run game, I stay controlled and dial-up my footwork. I work my hands as well. If I can continue to improve in those areas, it will help me tremendously as a run blocker. That’s for sure.

JM: How do you handle speed differently than power in pass pro?

EN: I handle speed differently from power because with power, I know a guy is going to try to run through me. That’s first and foremost. If I’m working with a speed guy, nine times out of 10 I’m gonna make sure I take a good set angle. If they’re gonna attempt to run around me, I like to attach onto his shoulder a lot of times and just run the hoop, run him around the quarterback. As opposed to power, with me being a big, strong, guy, you kinda want a guy to take you on and try to bull rush you. That makes my job a lot easier because it’s coming right to me. It’s playing into my lap.

JM: It really pops on tape. What are some tells you look for pre-snap?

EN: I like to look at a guy’s fingertips pre-snap. I pay close attention to which foot he has back in his stance. I’m looking for which foot he’s about to step forward with first. That can help me determine which way he’s going to rush up the field.

JM: Do you have a preferred pass set?

EN: I wouldn’t necessarily say that I have a preferred set. Not at this point, nope. I pretty much just take a good set, like a good 45-degree angle set. I try to stay square. I love a good square set. I then try to keep my hands up and ready to land a good punch.

JM: What would you say is your favorite way to demoralize your opponent?

JM: You frustrated a lot of defensive linemen on tape. Is there an NFL offensive tackle in today’s game that you’d love to sit down and pick their brain?

EN: Sure, I would love to sit down and chat about football with a lot of those guys. I’d love to pick their brains. A guy like Trent Williams immediately comes to mind. That would be a pretty cool conversation. Tyron Smith and a whole bunch of other guys come to mind, too. Those are for sure some of the guys I enjoy watching.

JM: What about some of the greats? Do you go back and study any film from any other past or present linemen in hopes of improving your game?

EN: At Alabama, coach Doug Marrone sent me some film of Jonathan Ogden. He sent me those cutups. I watched a lot of that. I love watching some Larry Allen film as well. He was such a legendary player for the Dallas Cowboys. I love the way he played the game as a mauler. He was a big and physical player. I’d use the words “tough and imposing” to describe his game. That’s for sure.

JM: Wow, I haven’t heard those two names in quite some time. I totally love that. Those are some great guys to learn from. You’ve had so many unbelievable teammates throughout your time at Alabama, but I’m going to put you on the spot. If you were going to war tomorrow and could only bring one of them with you, who would you bring and why?

EN: I would probably bring DeVonta Smith with me. I know he’s going to do his job at the end of the day. You can count on him. You can trust him with your life. He always came through in the clutch. It goes back to the amount of work I watched him put into his craft. You’re always going to trust him with the ball in his hands. You know he’s gonna come through for you in a crunch-time situation.

JM: That’s a terrific choice. What do you feel is the best game you ever played in an Alabama jersey and why?

EN: Hmm, I’m not sure. I’ve played in so many big and special games. To name one, that would be extremely difficult for me. I’ll say this, though. The SEC Championship Game from this past season was very special to me because of the entire narrative that was surrounding our team at the time. We had to go through a bunch of adversity throughout that time period. We were labeled as underdogs going into that game, which was rather unfamiliar territory for us. Coming out with that win was a special feeling for us.

JM: I’ve really appreciated your time today. I feel like this conversation has highlighted why Evan Neal may be the best overall player in the 2022 NFL Draft. In closing, why should a team use the first overall selection on Evan Neal on Thursday?

EN: A team should pick me because I’m extremely dependable at the end of the day. I’m going to come in and work as hard as I can to help make a swift impact on the team in a positive manner. You can count on me to play right away. I’m a versatile guy that can play multiple positions. You can essentially plug me wherever you need me to play. I’m going to fare extremely well at the next level.

Most importantly, I’m going to come in with a worker’s attitude. I’m going to work as hard as I can. That’s above all.