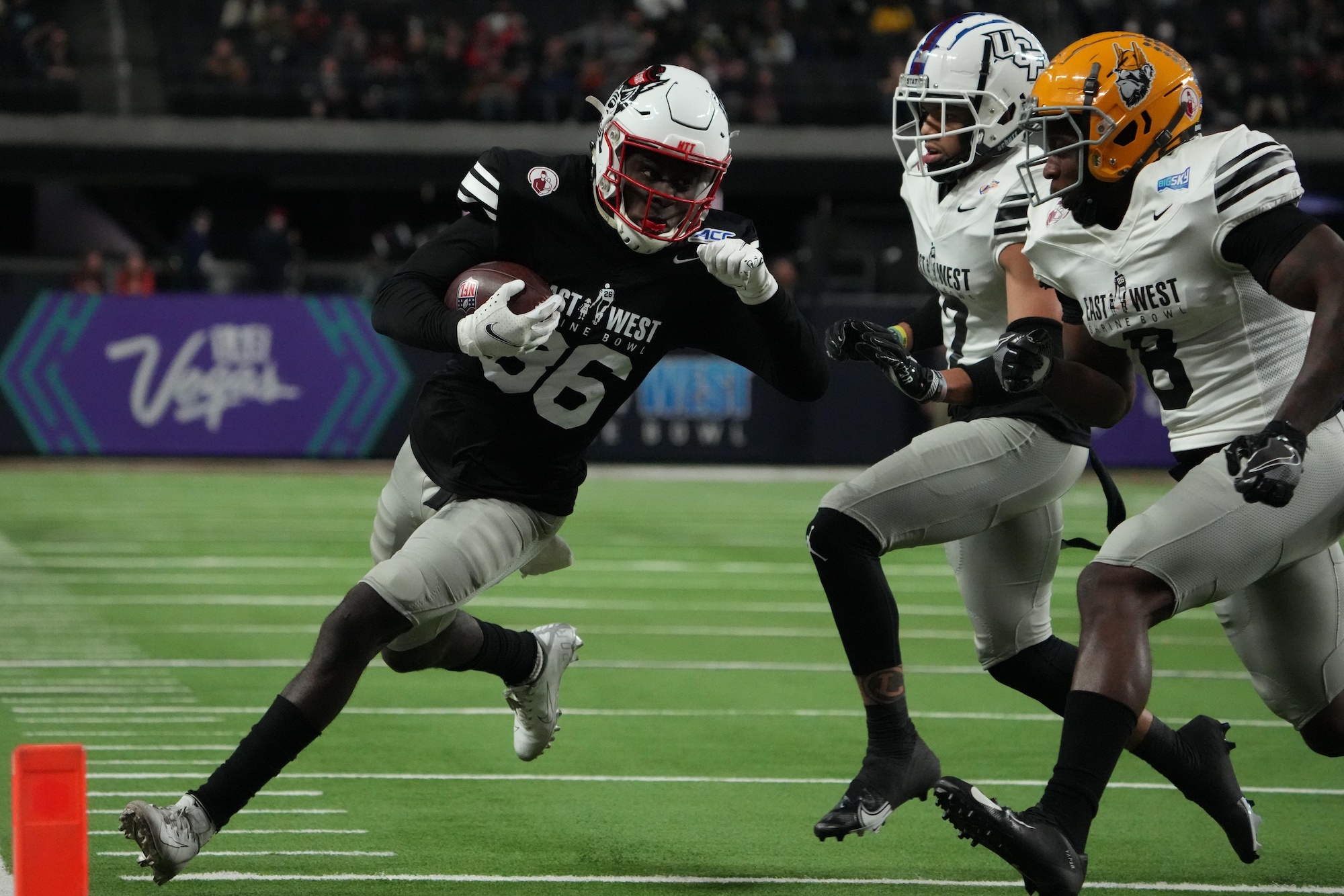 Tuesday’s action in Las Vegas was the final day of practicing for both teams at the Shrine Bowl before game day on Thursday. The final practices were more like walkthroughs, less fast-paced in many of the drills as in days past. Though it was still the last chance for players to make their marks and boost their draft stock. And while some players continued the dominance on the practice field they’ve had from the beginning, others saved their best showing for last. One such player was NC State wide receiver Emeka Emezie. Emezie came to Las Vegas off of a solid final season with the Wolfpack, one in which he set career-highs in receptions (60), yards (802), and touchdowns (6). After five years in Raleigh, he departed the program as NC State’s all-time leader in receptions and third on the program’s all-time leaderboard in receiving yards. While Emezie was very productive in his college career, his film was more of a mixed bag. The North Carolina native was good at making contested catches with his sizable frame and excellent competitive toughness. When he was in such situations, he was going to come down with the football because of his physicality, concentration, and good hands. His physical nature and toughness also made him good in his releases off the line of scrimmage, especially if he had a corner playing in his face in press coverage. On the flip side, Emezie hasn’t been a fast nor quick guy on film. He never really beat defenders downfield with his speed, and his lack of burst out of his breaks made him subpar at creating separation downfield. That made Emezie a bit too reliant on being physical when trying to win his matchups on the outside. So although he often won at the catch point, he found himself in too many contested-catch situations because he couldn’t create separation otherwise. That was the image we had of the NC State product before he arrived in Las Vegas for Shrine Week. And from the first day, we saw the same lack of separation issues that prevented him from rising up draft boards in spite of his production and great catching ability. https://twitter.com/ShrineBowl/status/1487854075190267905 Now, that’s a fantastic catch in a very contested situation, but as in many of his highlight plays from college, Emezie’s inability to create separation is what leads to those situations. This is why Emezie’s whip route in team drills on Tuesday was so impressive. https://twitter.com/jfmckessy/status/1488553696963162115 For one thing, it was in a short-yardage, red zone situation, so Emezie had to create separation immediately and in only a few steps. Given the difficulty he had creating any room right off the line of scrimmage without getting physical, that may have seemed like a tall ask. But Emezie ran an incredible route here. He got the cornerback on him—Baylor product Kalon Barnes—to bite hard on what looked like a quick slant, as he likely expected the receiver to run a simple, one-cut route and use his physicality to win at the catch point. Instead, Emezie planted hard on the second step out of his slant break, pivoting back and bursting outside instead. Without laying a hand on Barnes or using any of the physicality that brought him success at NC State, Emezie was wide open for the touchdown catch. That route got him some really positive reactions from his teammates and coaches, and it’s a great one for the receiver to build off of going forward. Props to Kansas State quarterback Skylar Thompson as well for this play. He’s had a very solid week in Vegas and made a great throw to the outside here with Notre Dame’s Myron Tagovailoa-Amosa right in his face, but I digress. On the final day of Shrine Bowl practices, Emezie took a big step in demonstrating his ability to create separation. He was looking good in one-on-one drills all morning, and he capped off his day with that great whip route. Practices are over, but Emezie can build on his performance today with a strong performance in the game on Thursday. If he shows he’s able to keep creating separation without relying so much on being physical, he could turn some heads. 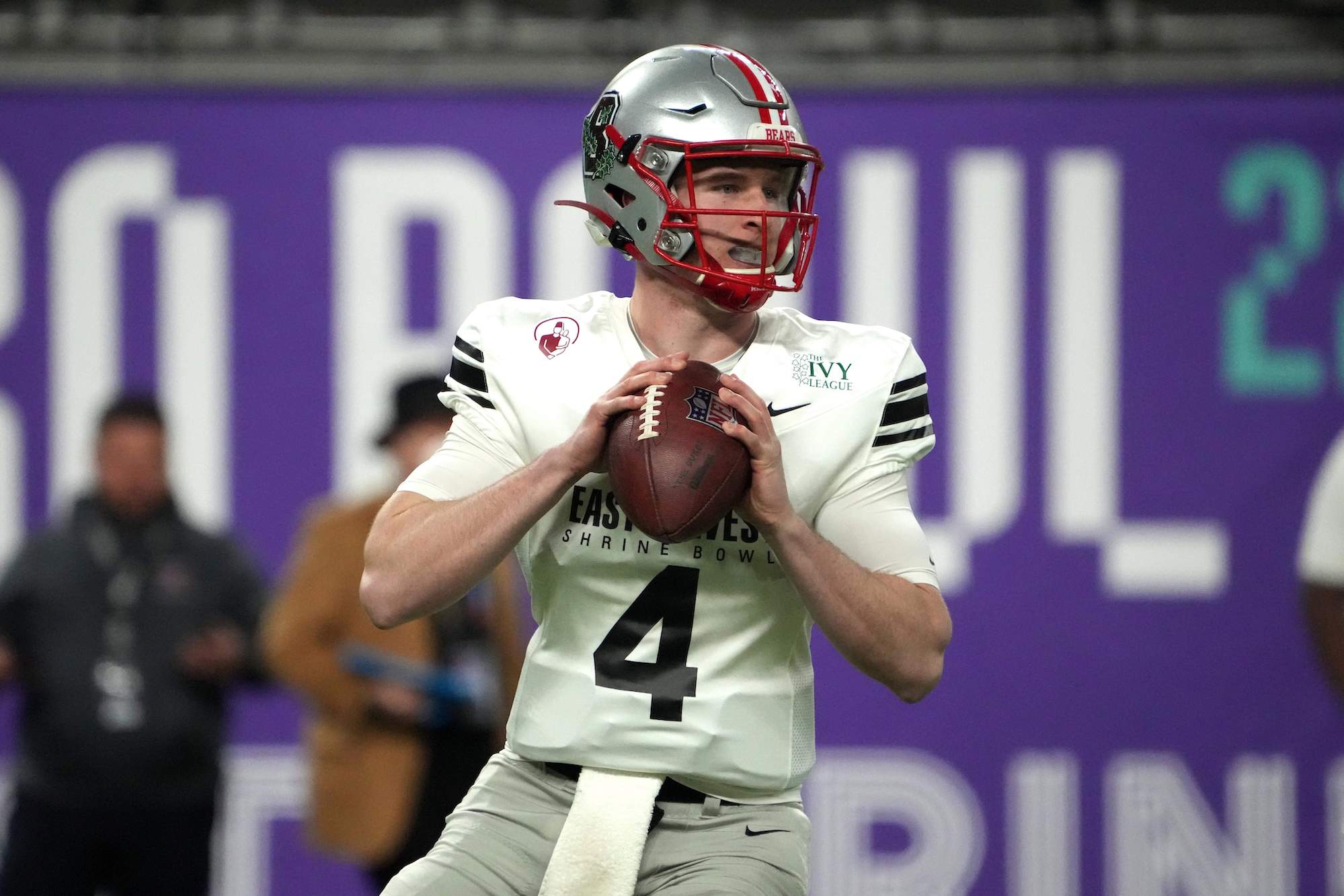 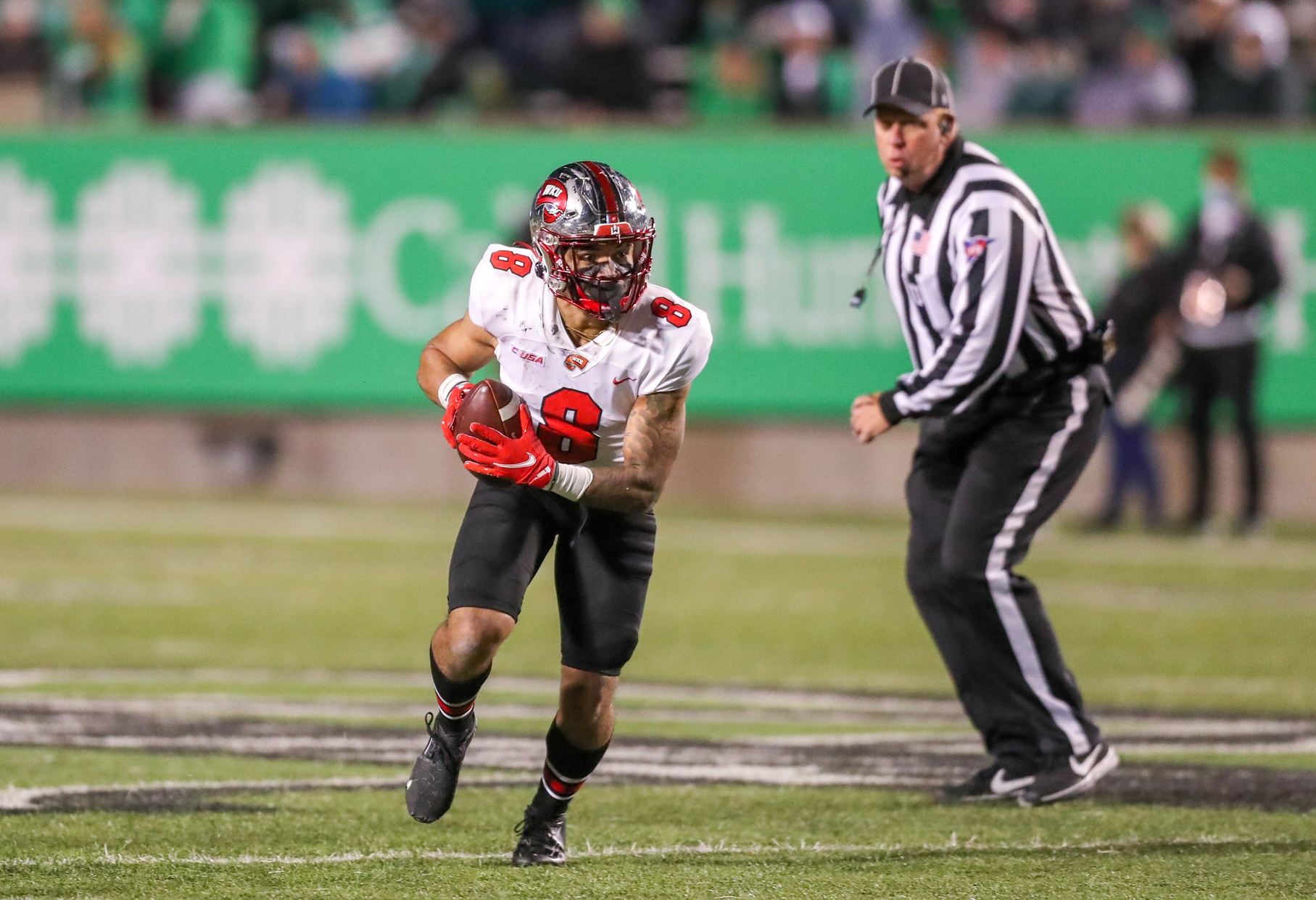