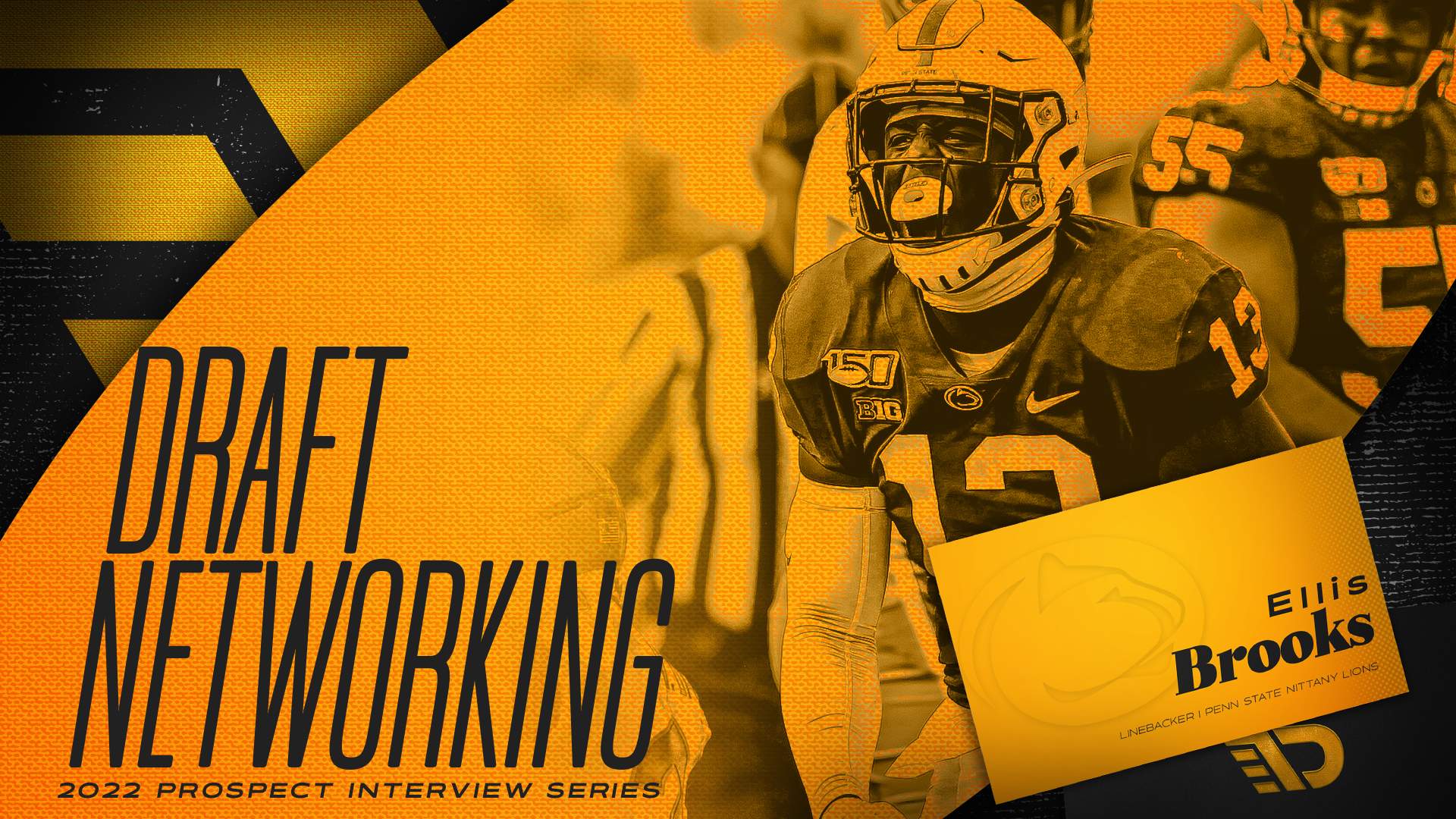 Penn State’s Ellis Brooks made the most of his opportunity to become a starter in the Nittany Lions’ front seven following Micah Parsons’ departure. Over the previous two campaigns, Brooks has totaled an impressive 160 tackles, 9 tackles for loss, and 2.0 sacks. Brooks is an athletic linebacker and NFL draft prospect that possesses a high-level understanding of how to stack and shed blocks while sorting through the clutter in the trenches. Brooks is smooth and natural when asked to drop in coverage.

Brooks recently spoke exclusively with The Draft Network regarding his final season at Penn State, the pre-draft process, how he sees himself fitting in at the next level, why an NFL franchise should use one of their draft picks on him, and so much more.

JM: You became a starter in 2020 and never looked back. How do you look back on your final two campaigns at Penn State?

Ellis Brooks: I would definitely say it was a learning process for me. We started the 2020 season 0-5. It was the COVID-19 season, and it was obviously an extremely strange year for us all. I learned a lot throughout that campaign, I grew as a person, and I became more experienced in all aspects of life and football. Going into this past season, it was a great experience. I had a chance to play football alongside some teammates and coaches that I’ll remember for the rest of my life. All in all, my experience at Happy Valley was a great one.

JM: We love to hear that. What’s your favorite aspect of playing the linebacker position?

EB: I feel like it’s a service position at the end of the day. That’s my favorite aspect of playing linebacker. It’s not just a job for yourself, but it’s for your teammates as well. I have to get everybody lined up correctly and get the proper call from the sidelines. You have to make adjustments based on formations and whatnot. I feel like it’s a position that’s all about your teammates. That’s something I really enjoy out of it.

JM: You’re a selfless player. On tape, we see an athletic linebacker that shows effective range when asked to drop in coverage. Linebackers have to be able to cover in today’s pass-happy league. Talk to me about your skill set in coverage.

EB: I feel like I’ve shown I can do it all in coverage. I can play man-to-man, zone, Tampa 2, drops in the middle of the field, and whatnot. Something I’ve tried to emphasize throughout this entire process is how smooth and oily my hips are. I’m able to open up and run, turn, drop, and things of that nature. It allows me to drive on the football in coverage whenever the quarterback makes a throw. It’s a skill that’s going to translate to Sundays.

JM: It really pops on film. Sometimes, the fastest route for a rookie to get on the field is to play special teams, especially as a linebacker. How comfortable are you playing special teams, and what previous experience do you have doing it?

EB: I’m extremely comfortable playing special teams. I played on all four phases at Penn State. That’s kickoffs, kickoff returns, punt coverage, and punt returns. I feel like it’s a big part of the game where you can really gain an advantage and the upper hand. Some people might overlook it, but I’m not one of those people. Anything I can do to help my team get an advantage and win football games, I’m excited to help in any way I can.

JM: That’s the right attitude to have. Have you met with any teams virtually or made any Top 30 in-person visits, and do you have any more of those coming up?

EB: I’ve been flooded with visits actually. I’ve been on the road traveling and meeting with a bunch of teams. I’ve met with so many great people throughout the process. I’m thankful for the opportunity to be considered by all of these teams. I’m excited to find out where I get drafted.

JM: We’re excited for you. Playing at Penn State afforded you an opportunity to compete against some of the best college football players in the nation on a weekly basis. Who are some of the best offensive players you’ve battled against?

EB: The Big Ten has so much excellent competition. One guy in particular that really stood out to me was Michigan State running back Kenneth Walker III. He runs hard and with terrific patience. He’s a downhill back that understands and explores cut-back opportunities. He was a lot of fun to play against. He’s the main one that comes to mind.

JM: He’s a heck of a competitor. I’ve really appreciated your time today. Why should a team use one of their draft picks on Ellis Brooks?

EB: I feel like they’re going to get somebody that reads their keys at an extremely high level. I run hard to the football every single play and I get people on the ground. I’m the best communicator on the field and I’m capable of earning that green dot at the next level.

I’m tenacious. I love the game, my teammates, and the culture we’re trying to establish within the organization. I love winning football games at the end of the day. I’m a selfless player that’s going to get the job done.

Those are a few of the reasons why a team should draft Ellis Brooks. The big day is almost here and I’m excited to find out where I’m going.