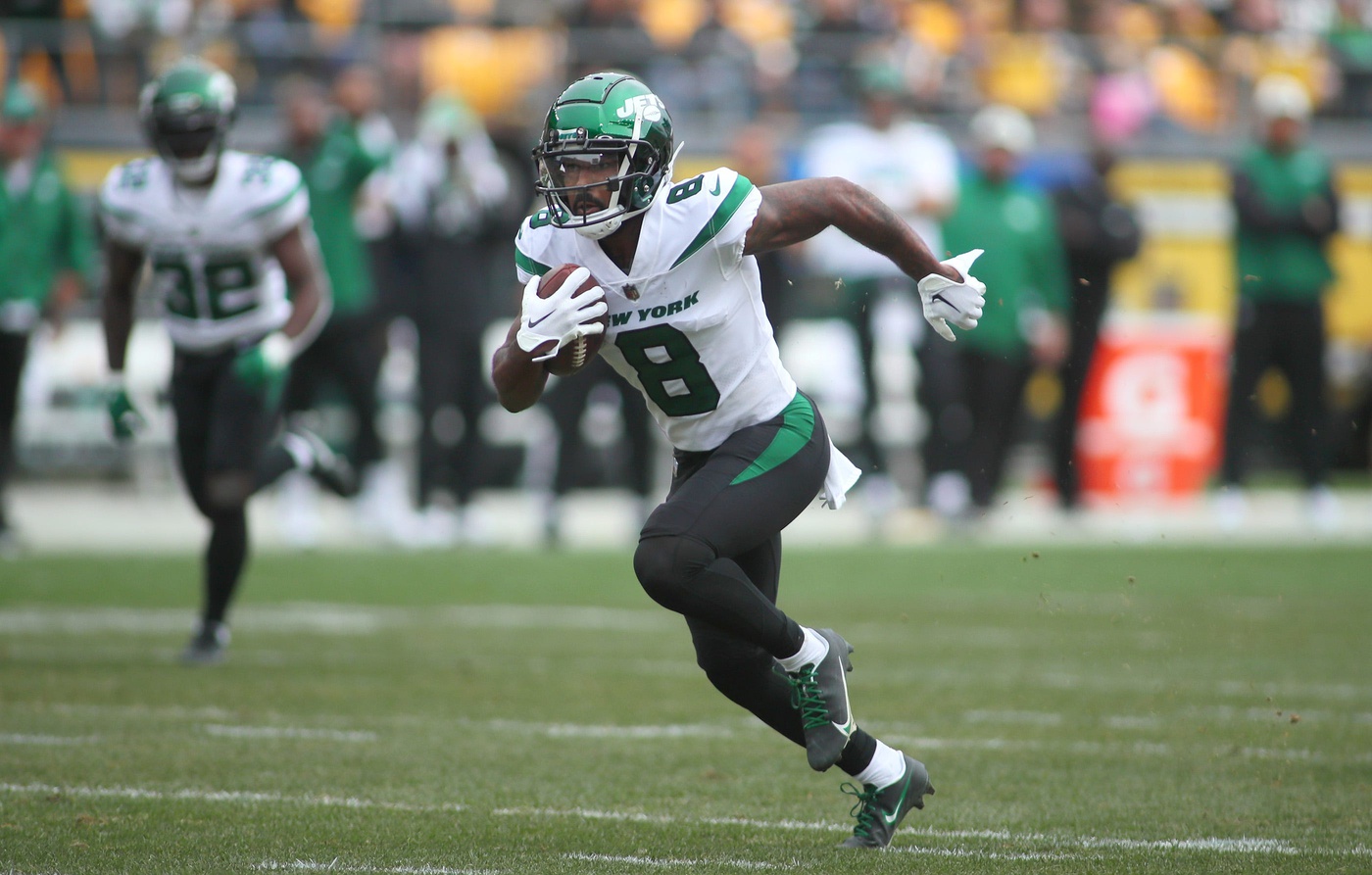 Elijah Moore Trade: These 3 Teams Should Trade For WR

Elijah Moore trade watch has officially begun as the New York Jets wide receiver requested a trade on Thursday, according to multiple reports. Moore first expressed his frustration in a now-deleted tweet after he didn’t receive an official target (his lone target was negated by a penalty) in the Jets’ dominant Week 6 victory over the Green Bay Packers. Moore was absent from Jets practice on Thursday, and we now know why.

Moore has been targeted on just 29 occasions through six games as both his production and influence on New York’s offense have dwindled in recent weeks. He’s recorded 16 receptions for 203 yards and zero touchdowns. Moore ranks fifth among all Jets pass-catchers in receiving yards and sixth in receptions.

Moore is on a cost-controlled contract as a second-round draft pick through 2024. Every team in the league should possess some level of interest in acquiring Moore. The Jets reportedly have no plans to trade Moore, but we’ll see how much pressure he can apply on the franchise leading up to November’s trade deadline. We’ve swiftly identified three potential landing spots for Moore’s services.

Packers starting quarterback Aaron Rodgers has already proclaimed that he expects his Packers to aggressively pursue upgrades at the trade deadline. A wide receiver would clearly live at the top of Rodgers’ wishlist (surprise, surprise). Packers general manager Brian Gutekunst could improve his receiver room by acquiring Moore, who would immediately step into a prominent role in Green Bay opposite Allen Lazard.

Rodgers’ Packers entered the season with legitimate questions at the pass-catching positions and those concerns have come to fruition. Second-round rookie Christian Watson hasn’t contributed with any sense of regularity while also fighting through injuries. Drops have also been an issue as Watson has accumulated just 52 receiving yards in four appearances. Watson has been outperformed by fourth-round rookie Romeo Doubs.

The Packers remain in win-or-bust mode with an aging Rodgers at the helm. It’s now or never for the Packer faithful. Acquiring Moore would extend the Packers’ Super Bowl window.

Could Giants general manager Joe Schoen pursue an opportunity to keep Moore in East Rutherford? Stranger things have happened. The Giants’ depth at receiver has been gutted by injury and inconsistent play. Wan’Dale Robinson is back from injury, but Kadarius Toney remains sidelined and has been the subject of trade rumors.

The expensive headache that is Kenny Golladay also remains sidelined. Sterling Shepard was lost to a season-ending injury. The Giants’ concerning situation at receiver has catapulted the likes of Richie James and David Sills into larger roles than they’re suited for.

The 5-1 Giants remain a rebuilding squad despite their heartwarming success. The Giants won’t be aggressive buyers at the deadline, but Moore represents a different type of opportunity altogether. Moore isn’t a one-year rental. Schoen and head coach Brian Daboll could continue building their vision of the Giants with Moore in mind. Offensive coordinator Mike Kafka would understand how to prioritize and involve Moore in his efficient offense.

Arthur Smith’s 3-3 Falcons have been more competitive than most envisioned. They’re currently tied for first place in the NFC South. Smith is building something special with the Falcons that will require additional patience.

General manager Terry Fontenot has already drafted a pair of high-upside pass catchers in Drake London and Kyle Pitts, but secondary options and depth remain a problem. The likes of Olamide Zaccheaus and KhaDarel Hodge are earning more snaps than anyone expected as a result. Moore would represent quite the upgrade.

Acquiring Moore would be more of a future play, however. The Falcons are still sorting through their situation at quarterback. Marcus Mariota is keeping the Falcons competitive on a weekly basis but clearly isn’t the long-term answer. Rookie third-round pick Desmond Ridder has yet to attempt an official NFL pass. Whether it’s Ridder or somebody else, whoever the Falcons’ quarterback of the future is would enjoy inheriting a pass-catching trio consisting of London, Pitts, and Moore.