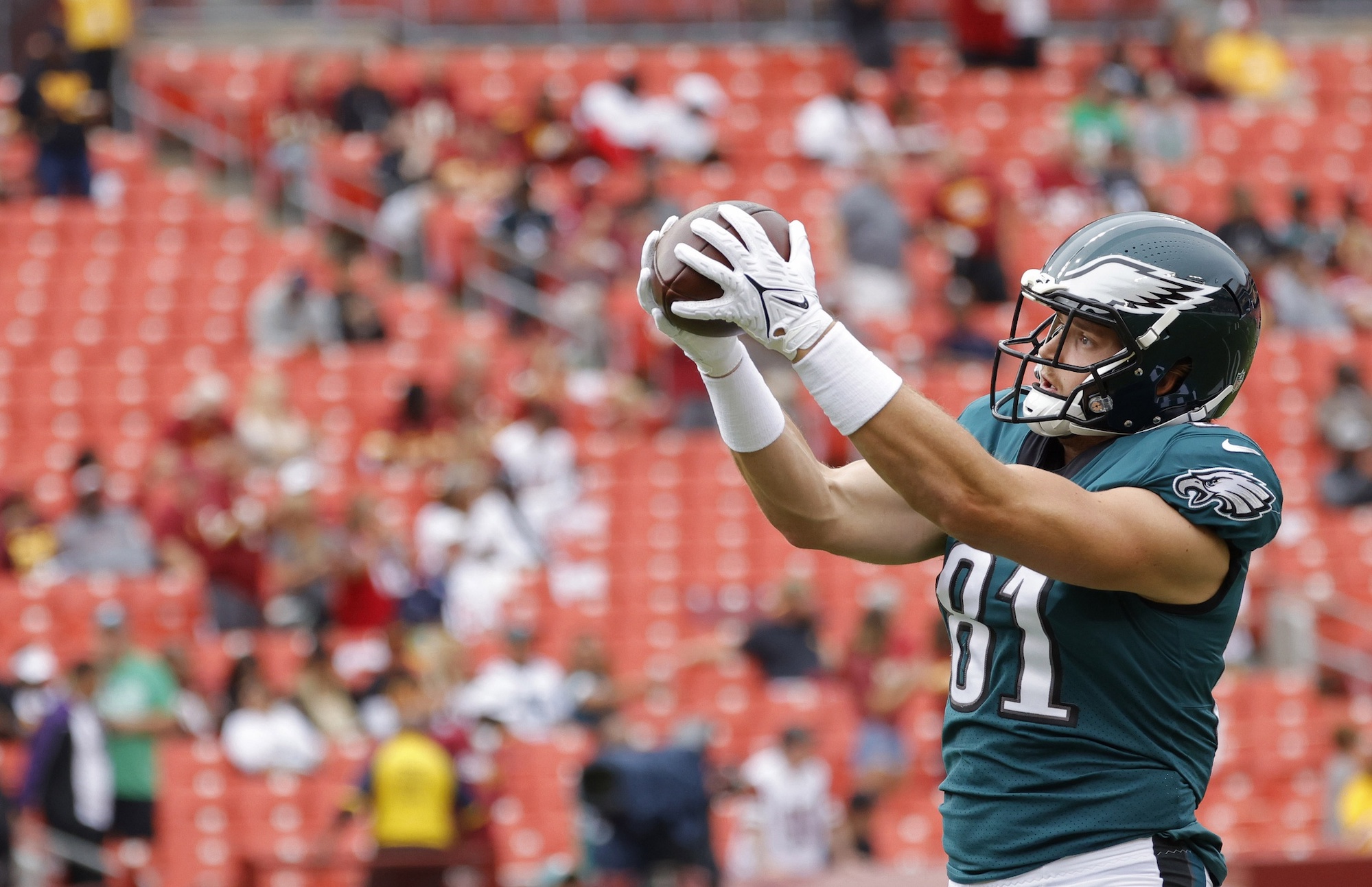 Philadelphia Eagles rookie tight end Grant Calcaterra is about to inherit the most fruitful opportunity of his young career. Eagles starting tight end Dallas Goedert will miss an extended period of time after suffering a shoulder injury in Monday’s defeat to the Washington Commanders, according to multiple reports. Goedert may be headed for a stint on IR. Calcaterra could step into Philadelphia’s starting lineup as a result.

Goedert suffered the injury in a controversial moment. A missed facemask penalty that caused a crucial fumble was at the forefront of Goedert’s injury.

Eagles head coach Nick Sirianni is now tasked with revamping his position room. It’s worth acknowledging that Calcaterra hasn’t been operating as Philadelphia’s No. 2 tight end. That honor has been bestowed upon Jack Stoll, a sophomore undrafted free agent out of Nebraska. Calcaterra is more of a like-for-like replacement for Goedert’s receiving abilities than Stoll is, however.

Stoll has been utilized as more of an in-line blocker than a game-changing receiving threat, hence why he complements Goedert well. For example, Stoll out-snapped Calcaterra 23-7 in Philadelphia’s Week 9 victory over the Houston Texans. That’s when Goedert was healthy and available. The splits were significantly closer on Monday, with Stoll narrowly winning the battle 11-7. Expect the gap to continue closing until it outright favors Calcaterra.

The dynamic experiences a shift in Goedert’s absence. The Eagles will require a pass-catching tight end to step up, and Calcaterra is a natural in that role. Among Philadelphia’s tight ends, Calcaterra is the favorite to inherit the bulk of the 5.9 targets per game Goedert’s injury leaves behind.

It’s worth monitoring how Sirianni deploys his tight ends moving forward. Quarterback-turned-tight-end Tyree Jackson is also eligible to be activated off IR this week. Noah Togiai may be promoted onto the active roster from the practice squad.

Calcaterra secured his lone target of the season for an explosive 40-yard completion. He created 23 yards post-catch on that reception, per Pro Football Focus. The sample size is inherently small, but Calcaterra has already proven his aptness for creating big plays. A larger workload will now arrive.

Calcaterra is used to featuring in high-octane passing attacks. Calcaterra accumulated 79 receptions for 1,102 receiving yards and 13 touchdowns across four seasons at Oklahoma and SMU. Calcaterra averaged a chain-moving 13.9 yards per reception in college. The No. 198 selection in the 2022 NFL Draft, Calcaterra remains an ascending tight end prospect with tons of upside.

“I want to be that guy that my team can count on as we attempt to make a run to the Super Bowl in my first season,” Calcaterra told The Draft Network exclusively in March. “I want to lead by example and do my job as we rack up the victories.”

Calcaterra spoke it into existence. Calcaterra now becomes a starring player for an Eagles franchise that possesses a league-best 8-1 record. The Eagles appear to be legitimate Super Bowl contenders, particularly in an NFC conference that’s loaded with disappointing units. Calcaterra may help his Eagles achieve their lofty goals by season’s end.

Calcaterra is writing an incredible NFL draft story. Multiple concussions previously forced Calcaterra to medically retire before making a triumphant return to SMU and breathing life back into his NFL stock. Calcaterra is about to write another chapter in his never-give-up journey.