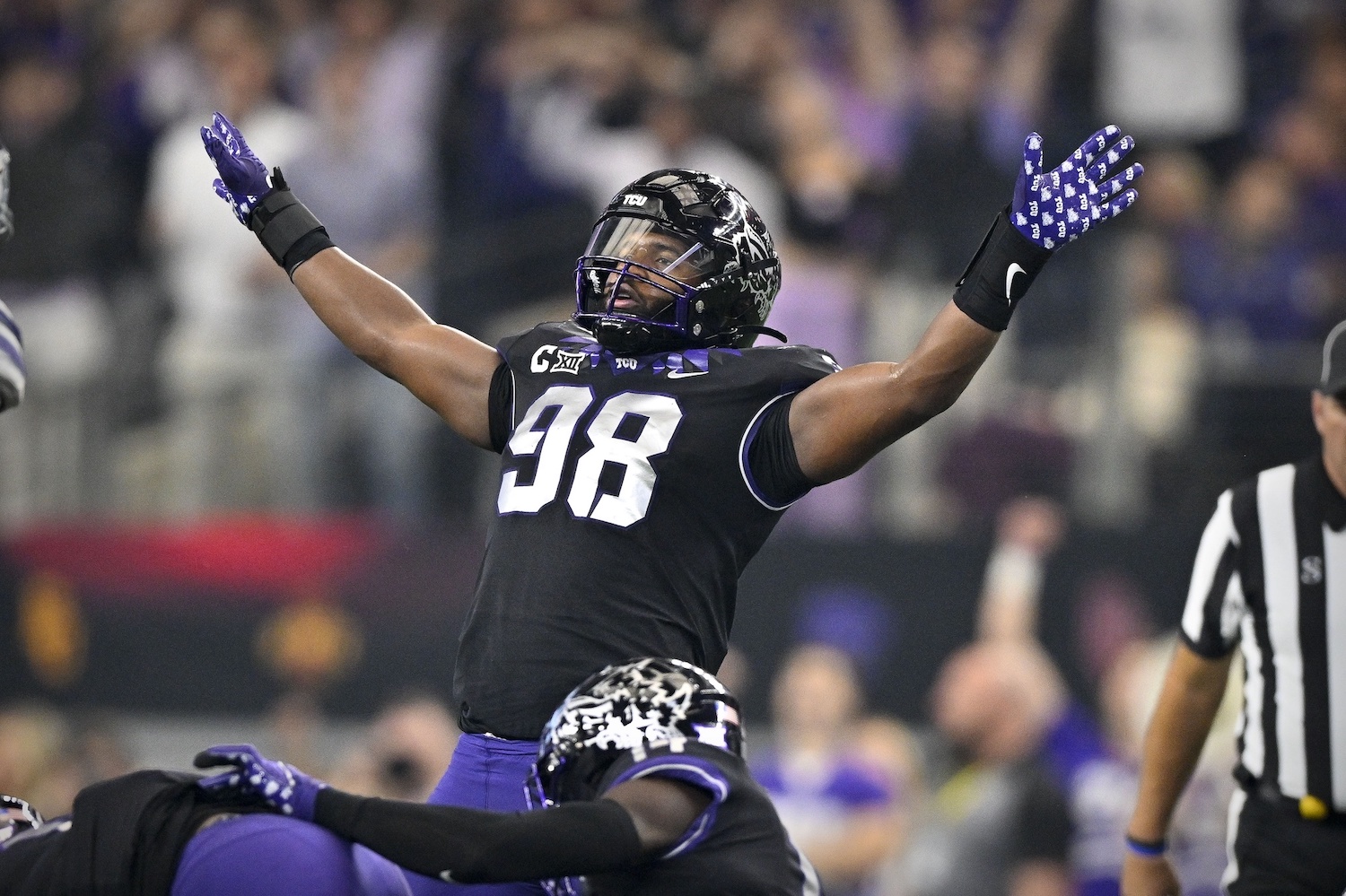 How Dylan Horton Can Boost Draft Stock At Senior Bowl

The 2023 Senior Bowl is fast approaching. One-on-one pass-rushing reps between defensive linemen and offensive linemen always draw a huge crowd. One player I can’t wait to observe in Mobile is TCU defensive linemen Dylan Horton. I believe Horton possesses an incredibly high ceiling as a versatile chess piece at the next level.

The No. 66 overall player in January’s TDN100 update, I believe Horton carries top-64 selection potential. Horton recorded career-highs in sacks (10.5) and tackles for loss (15.0) despite undergoing a position change that could have limited his pass-rushing opportunities.

In 2021, Horton played as an EDGE defender. He weighed approximately 250 pounds and was lighter on his feet. The Horned Frogs ran a 4-2-5 defense under head coach Gary Patterson. Horton was afforded traditional opportunities and responded by recording a respectable 4.0 sacks and 9.0 tackles for loss. Everything changed for Horton when current head coach Sonny Dykes replaced Patterson.

Dykes’ defensive coordinator Joe Gillespie switched to a 3-3-5 odd front. Dykes’ coaching staff asked Horton to put on a ton of weight in order to undergo a position change. He gained roughly 25 pounds and played the 2022 campaign at approximately 275 pounds. It was initially a difficult transition for Horton, who ultimately responded by becoming a more versatile player while putting up career-best numbers.

“I essentially switched from more of an outside EDGE defender to a defensive end that rotates from a 5-technique all the way to a 3-technique,” Horton recently told TDN. “I had to play more inside. I needed to gain a little bit more weight in order to make that transition.”

Despite setting new personal bests in a new-look role, I believe Horton’s pro projection is more of a traditional EDGE that carries valuable inside-outside versatility. As a pass rusher, Horton possesses all of the physical tools necessary to develop into a productive quarterback hunter. Horton has a quick first step to threaten winning the edge to get to the quarterback.

As a pass rusher that was tasked with threatening inside with more consistency in a 3-3-5 scheme, Horton possessed more B-gap responsibilities than in prior years. He utilized a long-arm move to bull rush inside. He also hit opposing offensive tackles with a long-arm and threatened outside. Horton did a fantastic job acclimating to his new surroundings.

Observing Horton at the Senior Bowl will be crucial to determining his pre-draft stock and future positional fits. Horton has had an opportunity to shape his body as he best sees fit throughout the pre-draft process. A collegiate coaching staff isn’t tasking him with losing or gaining weight to play a specific role he had little say in determining.

The Senior Bowl will afford Horton opportunities to revert back to 2021 while showcasing his capabilities to play the EDGE position in an even front. Horton is expected to arrive in Mobile approximately 10 pounds under the 275 pounds TCU asked him to compete at throughout 2022. It should allow Horton to showcase the first-step outside explosiveness he once displayed.

“I’m excited to play in a four-down defense again,” Horton said. |I’ll be coming off the EDGE [in Mobile]. I’m excited to showcase those abilities again. It’s essentially been a full season since I’ve been in that type of role. I’m ready to jump back into it.”

Jim Nagy and the Senior Bowl have fostered an environment that attempts to put NFL draft prospects in a position to succeed. The event is designed for Horton to present his skill set. Horton is fully capable of displaying both his versatility and unique skill set throughout one-on-one reps. Horton is going to shock a lot of people in Mobile.