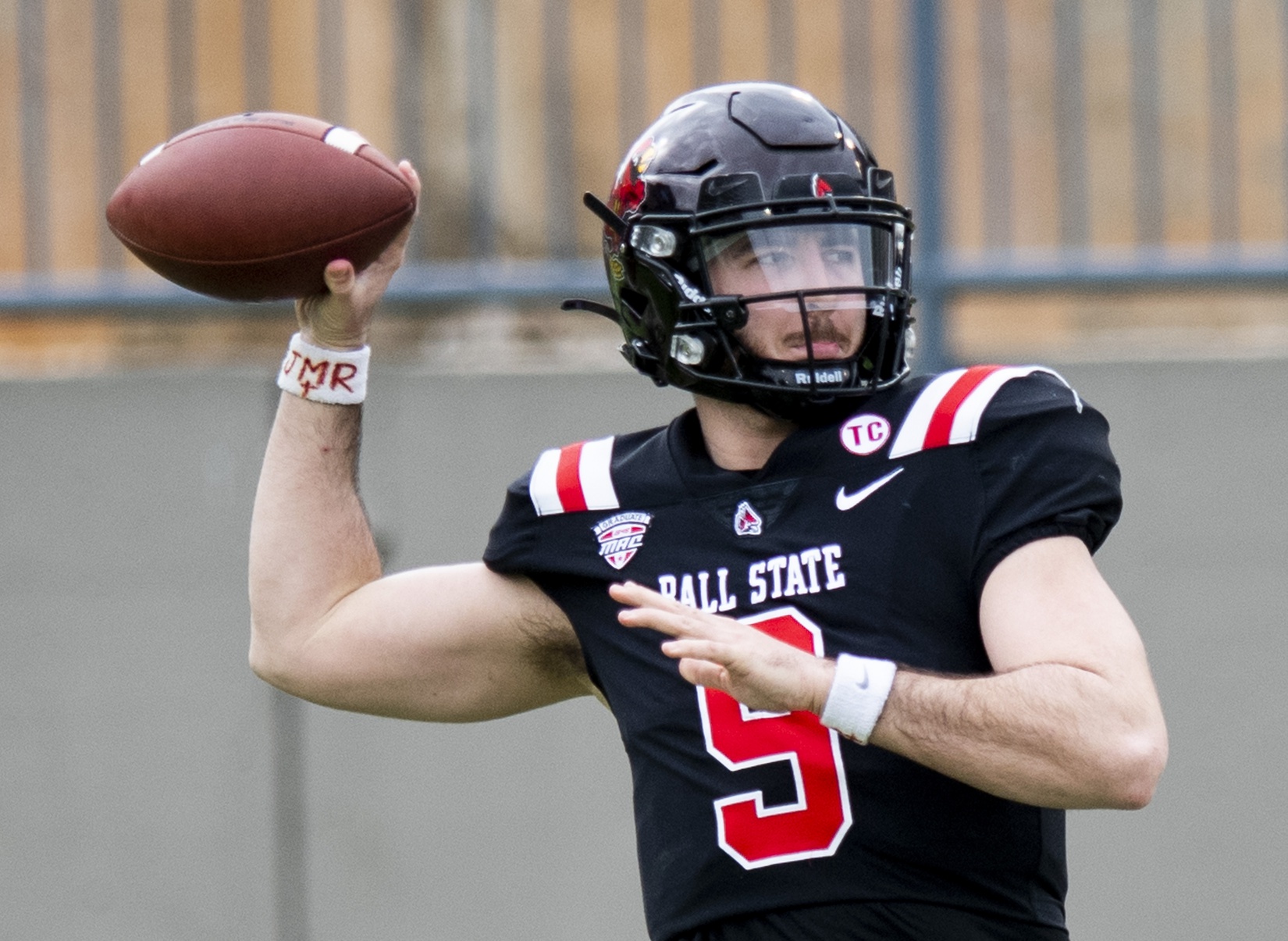 Will Drew Plitt Get An NFL Chance?

Ball State was a ways off from even being a solid football team in 2018 and the Cardinals didn’t stand a chance on paper going up against Western Michigan. The Broncos entered that matchup 6-4, in notably better shape than Ball State, which stood at 3-7 on a three-game losing streak with an offense that hadn’t scored more than 20 points in a game in a month. Then, backup quarterback Drew Plitt was called upon for an injured Riley Neal, with whom he had been in close competition before the start of the season. Ball State couldn’t have asked for a much better performance from Plitt, who completed nearly 81% of his passes with 258 passing yards and three touchdowns in a 42-41 overtime win not many saw coming. “We had lost three or four in a row and Riley was hurt, so we went in against a team where we were struggling and they were much better and we went in and beat a team that we weren’t even supposed to be hanging with,” Plitt said. Plitt calls that one of the biggest turning points in his career as he showed he was worthy of being a starting quarterback and that he could hang with tougher competition up against the odds. “I know that I’m a great leader and that leadership ability has played a big role in the success I’ve had,” Plitt said. “Going from a situation where we were one of the worst teams in the nation to one of the better teams in the nation, being ranked, I think that’s something that shows a lot.” After Plitt became the starter, his role grew gradually after he was declared the 2019 season starter, evolving into one where he had a great deal of control in the offense in the final two seasons, especially in 2021. “The year before I was calling a lot of my own plays. I was calling two-minute drills this year, calling plays on my own,” Plitt said. “I had the full range of the offense to call what I wanted to based on what I saw on the field. That’s part of the reason I chose to stay this year was added control of the offense. I was calling all of the protection calls, I had the run game protection calls, I was doing basically everything at the line—if someone needed to know something, I was telling them what they were doing.” Looking at what Plitt brings to the table at the next level, he’s more of a pure pocket passer but still trusts his ability to use his legs to get out of bad situations or when asked to do so. “I’m not the most athletic, but I make the plays that are needed and I lead the team the way I’m supposed to. I feel like I bring a lot of energy to a team and I make plays on the run when it’s asked of me.” There’s almost a negative connotation that surrounds the term “pocket passer” itself with the large emphasis on the mobility trend that seems to have gained popularity across the NFL. But at the same time, we’re seeing a lot of quarterbacks who are primarily pocket passers who have the ability to run but largely don’t unless the situation calls for it. https://twitter.com/BarstoolBallSt/status/1185655239657037824 https://twitter.com/PFN365/status/1433576637191364621 Plitt is confident he fits that “quarterback who can run” category as opposed to “running quarterback” and says he believes the NFL could be shifting more to favor quarterbacks like that. “I think there is (a stigma toward pure pocket passers), but at the same time, you can kind of see there are quarterbacks making plays on the run and doing stuff like that,” Plitt said. “You can kind of see that trend switching where, you look at Tom Brady this past year with the age that he was at, he was considered a pure pocket passer but was able to make plays on the run when needed. I was talking to a trainer down here  the other day about ideal quarterbacks and that’s someone who can make (rushing) plays when needed but is a pocket passer the way a pocket passer is supposed to be.” Outside of being a pass-first player (which is, in reality, exactly what a quarterback is supposed to be by technical definition), the main knock on Plitt has been a supposed lack of arm strength. However, he feels like that’s not a claim that carries substance. According to Plitt, it’s more of a case of how the offense was built as opposed to any shortcomings in his own abilities. “I think it was just a situation in our offense where we didn’t throw a lot of those routes that were out-breaking or way down the field on the outside,” Plitt said. “We focused a lot on short routes, inbreaking routes, and things of that nature. I have a lot stronger of an arm than people realize and I think that’s shown through while I’ve been training with some other quarterbacks going through the draft process.” He’s been training in preparation for the draft in Jacksonville, Florida where he’s thrown alongside some other quarterbacks and there hasn’t been any apparent difference in his own arm strength and the other prospects around Plitt who aren’t knocked the way he is. “I’ve been focusing on showing my ability to throw on deeper routes, I feel like that’s something that’s been a big knock on me from what I’ve seen—my arm strength and putting the ball accurately down the field,” Plitt said. Plitt was an important part of bringing Ball State from a completely under-the-radar program to No. 23 in the final AP Top 25 poll back in January of 2021, now it will be interesting to see if he gets a shot to help play a part for an NFL team.