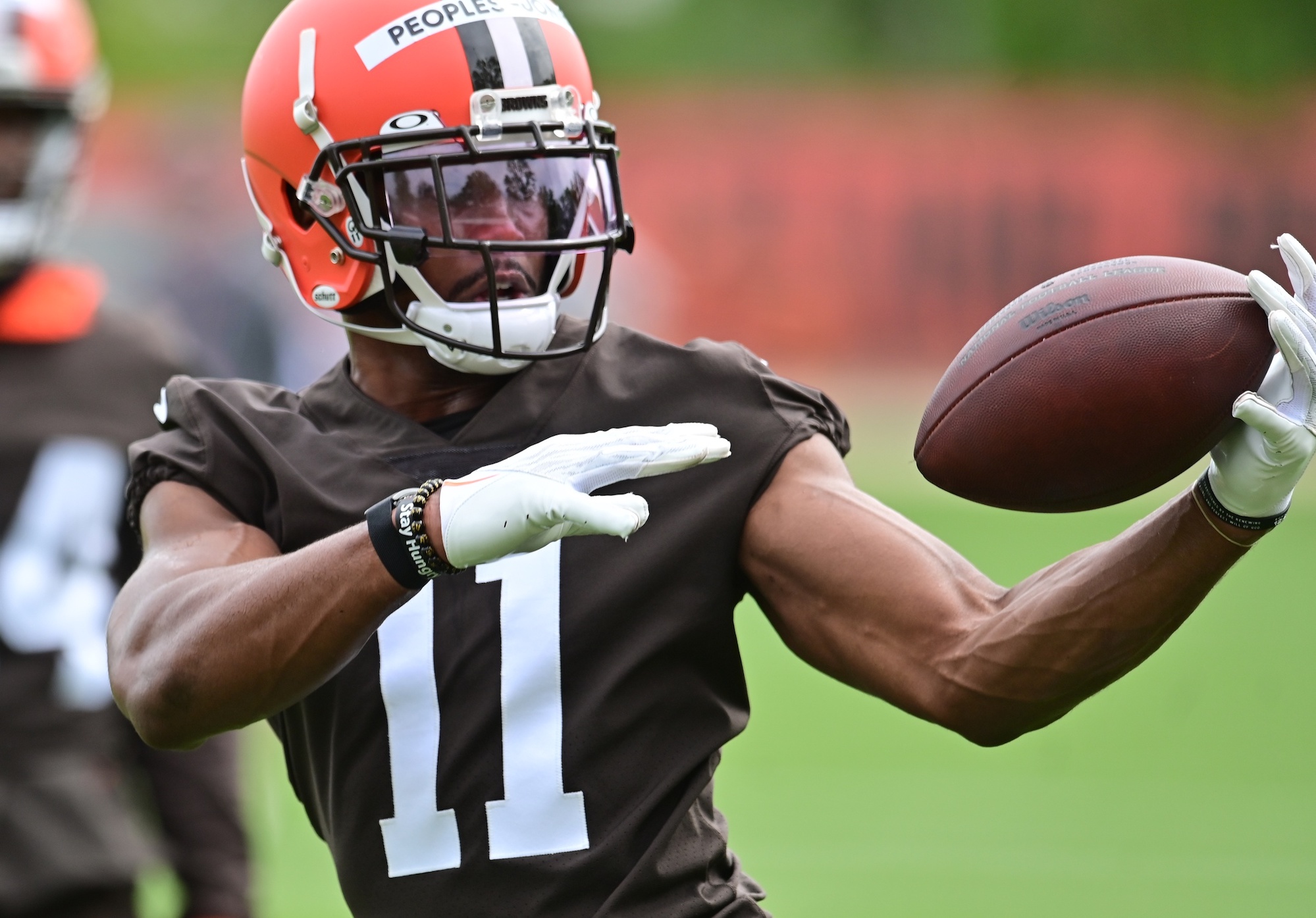 Why Browns’ Donovan Peoples-Jones Is Poised For Breakout 2022 Season

The Cleveland Browns are entering the 2022 season with the weight of massive expectations on their shoulders. Browns General Manager Andrew Berry was as aggressive as any league-wide decision-maker this offseason and the Browns faithful are expecting immediate results. Although new acquisitions (more on them later) are expected to carry the franchise forward, Cleveland is also relying on in-house candidates to continue developing and take the next steps. The current make-up of the Browns’ roster indicates wide receiver Donovan Peoples-Jones is primed for a breakout season in 2022.

A sixth-round selection out of Michigan in the 2020 NFL Draft, Peoples-Jones has already outperformed his draft slot, and the former Wolverine is set to receive his biggest opportunity since turning pro in 2022. In 2021, Peoples-Jones recorded career-highs in receptions (34) receiving yards (597), and touchdowns (three) while serving as Cleveland’s No. 1 receiver down the final stretch of the season. It was a preview of what’s still to come. Cleveland’s passing game was downright broken last season and the opportunity that awaits Peoples-Jones in 2022 looks even more appetizing given the upgrades Cleveland has secured on offense.

The Browns traded for quarterback Deshaun Watson and signed him to a historic fully-guaranteed contract worth $230 million. Watson takes over for Baker Mayfield, who was traded to the Carolina Panthers last week. Mayfield struggled mightily in 2021 while playing through an injury to his non-throwing shoulder. The Browns’ passing game suffered as a result, averaging just 195.3 passing yards per contest (27th ranked passing offense).

Watson is expected to provide a major upgrade under center while drastically improving the team’s passing numbers from last season. Watson may still face a suspension as the league continues to investigate his alleged off-field behavior, but recent reports indicate Watson’s potential punishment may not be as long as assumed. Having Watson under center will benefit Peoples-Jones greatly.

In addition to Watson, Berry also acquired wide receiver Amari Cooper in a blockbuster trade with the Dallas Cowboys. Cooper will be Cleveland’s No. 1 receiver and is expected to quickly become Watson’s go-to target. While Cooper will command attention from opposing secondaries, Peoples-Jones is expected to serve as the starting receiver opposite him on the boundary. Peoples-Jones should manage to take advantage of some favorable matchups.

Peoples-Jones is expected to start in Cleveland due to a lack of general activity at the position outside of acquiring Cooper. Jakeem Grant Sr. was Cleveland’s lone free-agent signing at receiver, and Grant isn’t expected to find himself in a positional battle with Peoples-Jones given their differing body types and skill sets. Long-time veteran Jarvis Landry was released from his contract and Rashard Higgins signed with the Panthers as a free agent. The offseason departures of both Landry and Higgins further cemented Peoples-Jones’ positioning on Cleveland’s pass-catching depth chart.

It’s worth acknowledging that Berry further addressed the position by drafting former Purdue wide receiver David Bell with the No. 99 overall selection in the 2022 draft, but like Grant, Bell isn’t expected to threaten Peoples-Jones’ snaps out wide. Bell is expected to join Cooper and Peoples-Jones on the field as Cleveland’s designated slot receiver. Bell is fully capable of enjoying a fruitful rookie campaign, but it should hardly come at the expense of the role Peoples-Jones is expected to play.

It will be interesting to monitor how much head coach Kevin Stefanski is willing to shift his offensive strategy now that he possesses a legit top-tier quarterback under center. Stefanski has previously preferred to lean on a run-heavy approach with the one-two punch of Nick Chubb and Kareem Hunt in the backfield. With Chubb and Hunt both remaining in the fold, the Browns aren’t expected to abandon the run altogether by any means, but Watson’s presence should lead to a more balanced approach that keeps defenses on their toes. A more pass-happy offense will benefit Peoples-Jones in 2022.