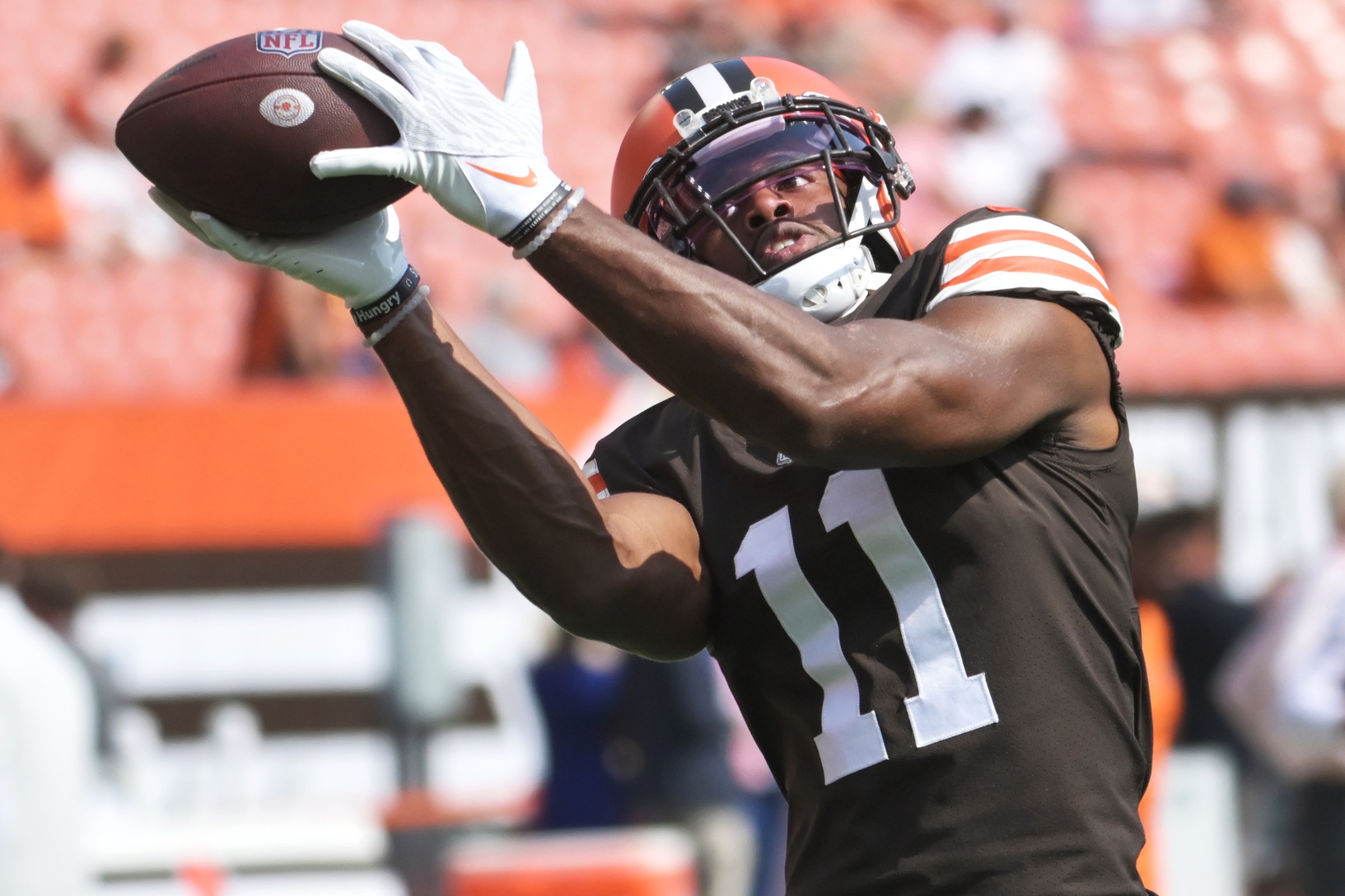 The Cleveland Browns suffered a difficult defeat at the hands of the Miami Dolphins on Sunday, losing 39-17. Browns head coach Kevin Stefanski will attempt to locate some moral victories as the Browns prepare to flush this performance. The continued emergence of wide receiver Donovan Peoples-Jones offers a banner of optimism.

Peoples-Jones secured five-of-nine targets for a season-high 99 receiving yards. Peoples-Jones averaged an explosive 19.8 yards per reception. The former Michigan standout is developing into a worthy No. 2 receiver in Cleveland’s passing offense. Peoples-Jones is taking advantage of favorable positions as opposing defenses continue to harp on limiting Amari Cooper and Nick Chubb.

The No. 187 overall selection in the 2020 NFL Draft, Peoples-Jones has recorded 50-plus receiving yards in six consecutive showings. He’s been a model of consistency and continues to showcase reliable hands, being credited with just one drop this season.

Peoples-Jones is making explosive plays (20-plus yards) on a weekly basis. He’s recorded receptions of 37-plus yards in four consecutive showings. Stefanski is beginning to look in Peoples-Jones’ direction when the Browns require a game-changing gain.

Peoples-Jones is appropriately building upon a career-best campaign last season that saw him record 34 receptions for 597 receiving yards and three touchdowns. Peoples-Jones took advantage of a late-season sample size as Cleveland’s No. 1 receiver. He’s now thriving in a secondary role and appears primed to smash last season’s totals.

At his current rate, Peoples-Jones is set to essentially double last season’s totals when extrapolating his current outputs throughout the course of a 17-game campaign. The former sixth-round selection is on pace for 66 receptions and 974 receiving yards. A 1,000-yard season remains within the realm of possibility. Peoples-Jones hasn’t scored a touchdown this season, but it’s a matter of time before his current production leads to frequent end-zone visits.

Peoples-Jones’ production has been closer to Cooper than expected. He’s averaging a team-high 14.7 yards per reception. He’s now trailing Cooper’s season-long yardage total by just 69. Cleveland’s passing attack has featured more of a “1A” and “1B” approach than expected.

Nobody is more pleased with Peoples-Jones’ ascension than Browns general manager Andrew Berry. The Browns entered the 2022 campaign with a top-heavy reputation at the receiver position. They possessed little proven talent outside of Cooper. Berry attempted to further address the position by drafting former Purdue receiver David Bell with the 99th selection in April’s draft, but Bell continues to slowly acclimate to the pro ranks. Bell has recorded just 12 receptions this season. It’s Peoples-Jones that’s answering a long-term question about Cleveland’s No. 2 receiving position.

Peoples-Jones is just scratching the surface of his potential. Browns starting quarterback Deshaun Watson will return to Cleveland’s lineup in Week 13 following an 11-game suspension. Watson is undeniably a better quarterback than Jacoby Brissett. His presence should immediately make Cleveland a pass-happier offense, which in turn will make Peoples-Jones an even more dangerous threat on the boundary.