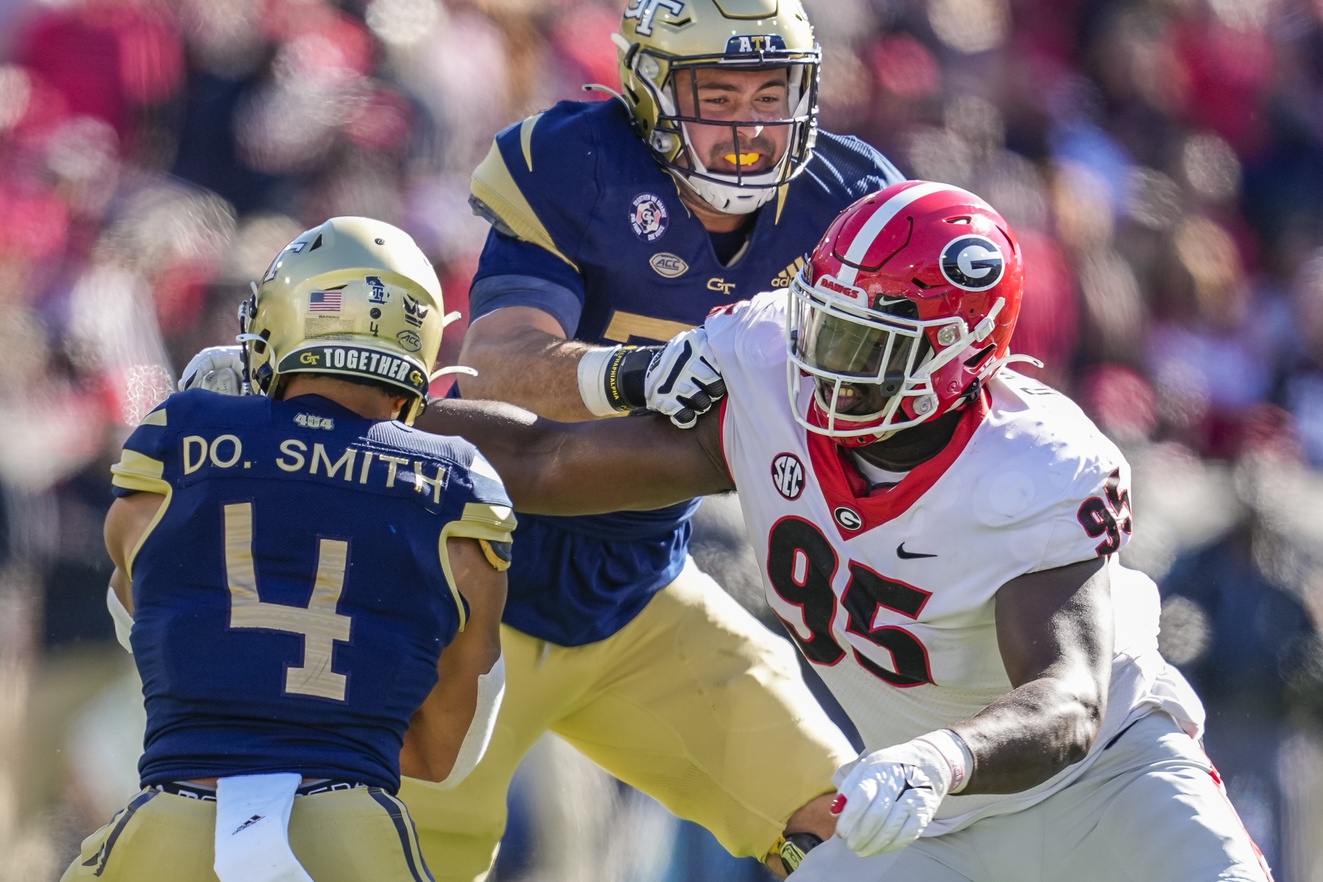 Oftentimes in the past season of college football, it seemed like the Georgia Bulldogs’ defensive front moved faster than everyone else. As it turns out, that was exactly the case. And while Jordan Davis may have stolen the show at the NFL Scouting Combine last week, don’t sleep on fellow Georgia defensive lineman Devonte Wyatt.

Much of the talk out of the defensive linemen testing at the NFL Scouting Combine surrounded Davis—and for good reason! The big man ran one of the best 40-yard dash times by a defensive lineman in combine history with a 4.78 while also setting a new combine record for broad jump at the position (10-foot-3). But Wyatt, another big man in the trenches of Georgia’s defensive line, had a goal to put up some eye-popping numbers of his own.

“I’m trying to show like, ‘he can move, this guy right here is crazy.’ I want their eyes like this,” Wyatt said, raising his eyebrows and widening his eyes.

By the end of testing Saturday evening, he had accomplished that goal. The 307-pound Wyatt one-upped Davis’ 40-yard dash performance with an official time of 4.77 seconds, one-hundredth of a second faster than Davis. Wyatt also had an impressive 29-inch vertical leap and a 9-foot-3 broad jump that were both among the top five of all defensive tackle participants in those drills.

“If I was writing about myself, I’d be like ‘this guy’s amazing,’” Wyatt said. “If that was me, I’d definitely write, ‘this guy, he’s got great personality. He can move, and he’s definitely going to be a great player in the NFL.’”

That confidence isn’t unwarranted. Not only did Wyatt end up testing well, but he’s looked good on film all year. He’s got a quick and explosive first step on the snap that allows him to get good penetration on the interior in both running and passing plays. He also has a strong base that allows him to generate momentum and leverage against offensive guards, in turn enabling him to win or at least hold his ground at the point of attack in run defense.

Though the Georgia lineman’s abilities and performances might get occasionally overshadowed by the accomplishments of his peers on that stout Georgia defense—especially Davis—Wyatt has never felt like the ‘other guy.’

“It felt like a family, I felt like a brother. They never treated me– nobody ever acted like they was bigger than the other person,” Wyatt said. “That’s my thing, I love my boy, Jordan. He always kept me up, I kept him up, and we always pushed each other.”

That’s a great mindset to have, especially with Wyatt being as good a player as he is in his own right. After all, he was a major contributing factor to one of the greatest defensive fronts that college football has ever seen. There are likely plenty of NFL teams today who would trade their current front seven for the guys Georgia had on their defense this year.

Edge rushers Channing Tindall and Travon Walker, tackles Wyatt and Davis, and linebackers Nakobe Dean and Quay Walker are all currently within the top 90 of TDN’s 2022 prospect rankings. Half of them—Walker, Dean, Wyatt, and Davis—are within the current top 32.

“You just look at that [Georgia] defense, and look how many players that can play an NFL defense and can start,” Wyatt said. “Just playing with those guys gave me a look of how it’s going to look in the league, so I’m definitely prepared. I’m definitely ready.”

So, yes, Davis might have won the 2022 NFL Combine with his unbelievable numbers, but Wyatt’s measurables, charisma, and preparation from his time in Athens have all ensured that he turned scouts’ heads in Indianapolis.