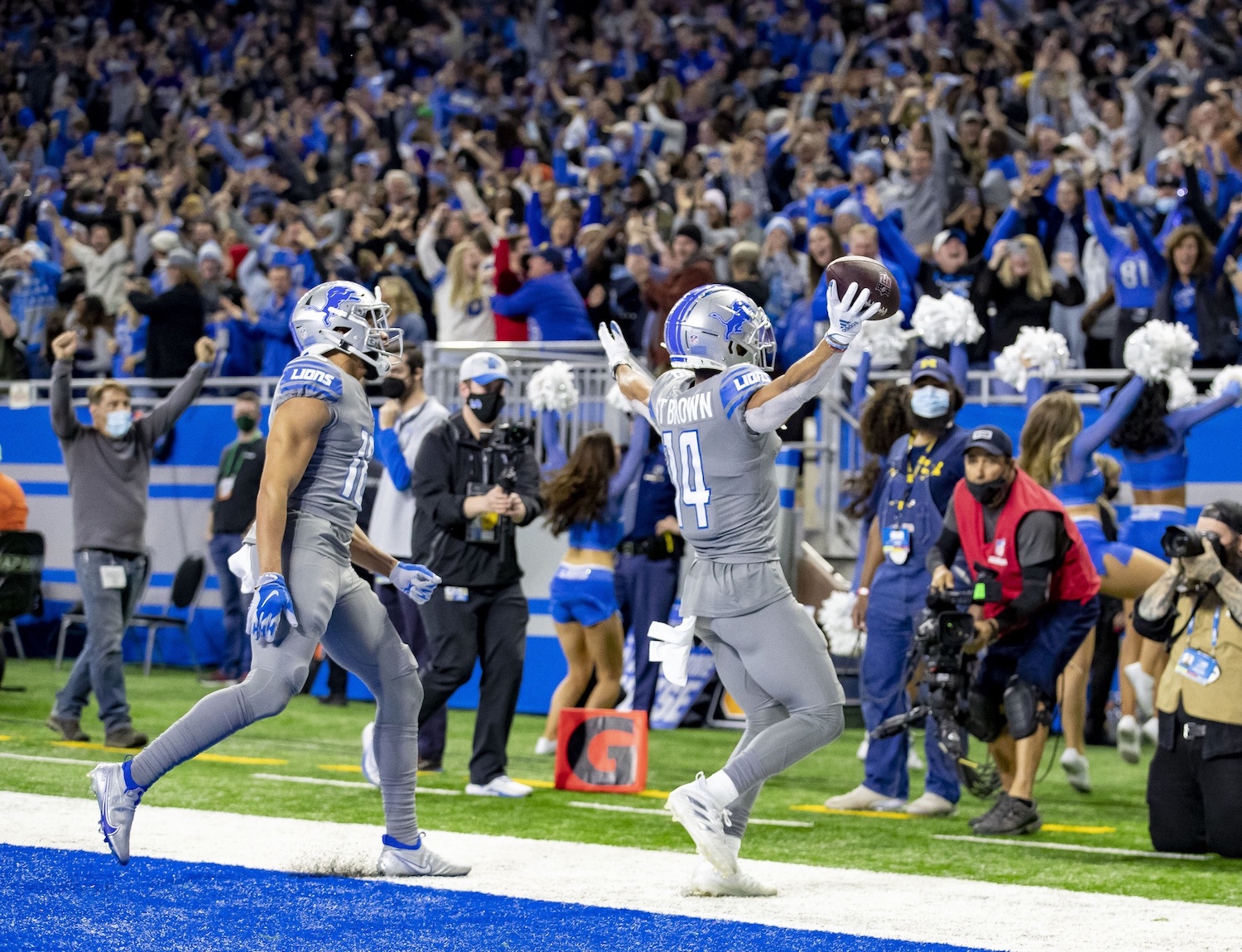 What Will Make 2022 Season A Success For Lions?

Detroit Lions fans have reason for renewed optimism. Last year’s Lions team was tough to watch—there’s no way around that. Year one of a lengthy rebuild yielded the appropriate growing pains. Lions General Manager Brad Holmes hit the reset button by trading franchise quarterback (and eventual Super Bowl winner) Matthew Stafford to the Los Angeles Rams in exchange for a package including multiple first-round draft picks and bridge quarterback Jared Goff. The Lions crawled to just three victories (in a new-look 17-game season, no less).

As a result, a successful 2022 season in Detroit doesn’t have to involve a postseason berth. Baby steps. An improved record is an expectation that shouldn’t be difficult to achieve. The Lions possess an abundance of young talent that must take the desired step forward to prove the franchise is headed back in the right direction. That growth is potentially more important than Detroit’s final record—although inching toward .500, something the Lions haven’t achieved since 2017, would be welcomed with open arms by a fan base that’s suffered long enough.

If Head Coach Dan Campbell began installing the new-look culture last season that will propel the Lions forward, Holmes began laying the foundation of the roster this offseason. An aggressive summer has seen the Lions acquire talent both via free agency and the NFL draft. The offense especially received Holmes’ attention, particularly at wide receiver. Goff was saddled with arguably the least impressive group of pass-catchers to be found across the league last season. He’ll be throwing to some new faces in 2022.

Holmes’ receiver room required more than just one addition and reinforcements arrived via a stunning draft-day trade. The Lions owned the No. 32 overall selection (which they received in the Stafford trade), but Holmes traded up 20 spots, flipping that pick into the 12th overall selection to draft former Alabama receiver Jameson Williams. Williams is a dynamic and breathtaking athlete that adds some much-needed jolt to Detroit’s receiver room. Williams may not be available in September as a result of a torn ACL in Alabama’s National Championship defeat to Georgia, but he’s going to make an immediate impact whenever he’s healthy enough to do so.

Chark and Williams join a position room that is spearheaded by sophomore-to-be Amon-Ra St. Brown, who was an absolute revelation as a rookie. One of few bright spots on Detroit’s 2021 offense, St. Brown’s production was born both out of necessity and talent. A fourth-round selection in last season’s draft, a lack of proven talent allowed St. Brown to quickly shoot up Detroit’s depth chart. St. Brown finished his rookie season with 90 receptions for 912 receiving yards and five receiving touchdowns. St. Brown will be surrounded by more talent next season, but the chemistry he’s built alongside Goff should allow him to thrive once again.

The rest of Detroit’s offense is littered with underrated talents. Running back D’Andre Swift is a game-changer when healthy. Health has unfortunately been the caveat to surround Swift’s first two seasons in the league. The former Georgia product has proven capable of producing a 1,000-plus-yard season if he can manage to remain on the field for 17 contests. Swift totaled 839 yards last year (419 rushing, 420 receiving) despite being limited to nine appearances. If Swift stays healthy, a true breakout campaign will reveal itself.

Tight end T.J. Hockenson is another ascending talent. The No. 8 overall selection in the 2019 NFL Draft, Hockenson would have flirted with the first 1,000-yard receiving season of his career had knee and thumb injuries not robbed him of five appearances.

For a rebuilding team, the offensive line finds itself in good standing. Last season’s top-10 selection Penei Sewell enjoyed an impressive rookie campaign despite initially struggling to move from left to right tackle. Sewell is a building block moving forward. Sewell switched to the right side because Taylor Decker remains one of the more reliable blindside protectors across the league. The Lions missed Decker when he was sidelined last season.

In the interior, Frank Ragnow is an underrated pivot man that was unfortunately limited to four appearances in 2021. Ragnow is healthy and primed to re-establish himself as one of the best centers in football. Elsewhere, Halapoulivaati Vaitai is a quality starting guard. Detroit’s offensive line was riddled with injury last season but is capable of gaining recognition as a top-10 unit in the league this season.

Detroit’s defense is similarly loaded with young talent that’s yet to prove themselves. More is expected from second-year defensive linemen Levi Onwuzurike and Alim McNeill, the latter of which we tabbed as a breakout candidate for the upcoming campaign. Both sophomores will receive a boost from playing next to No. 2 overall selection Aidan Hutchinson. Romeo and Julian Okwara, Charles Harris, and Michael Brockers round out a sneaky-good D-line. Potential is a dangerous word, but this defensive line could be a much-improved unit.

In the secondary, Amani Oruwariye is possibly the best cornerback you’ve never heard of—Oruwariye’s form has been swallowed by the substandard play of those around him. The former Penn State standout was a turnover machine last season, accounting for a team-leading six interceptions. Trevon Diggs and J.C. Jackson were the lone NFL defenders to record more interceptions last season.

Oruwariye will hopefully be joined by Jeff Okudah in 2022. It qualifies as a do-or-die campaign for Okudah, who has been hampered by injury after injury since joining the Lions as a top-three selection out of Ohio State. Okudah has appeared in just 10 regular-season contests across two seasons but still carries the potential to become the shutdown cornerback and cornerstone piece he once appeared destined to be.

The quest for improvement is within reach for an on-the-rise Lions franchise. A failure to secure a playoff berth in 2022 wouldn’t be viewed as a disappointment so long as the Lions showcase necessary growth. Detroit’s new-look roster carries the potential to be one of the league’s most enjoyable teams to watch.