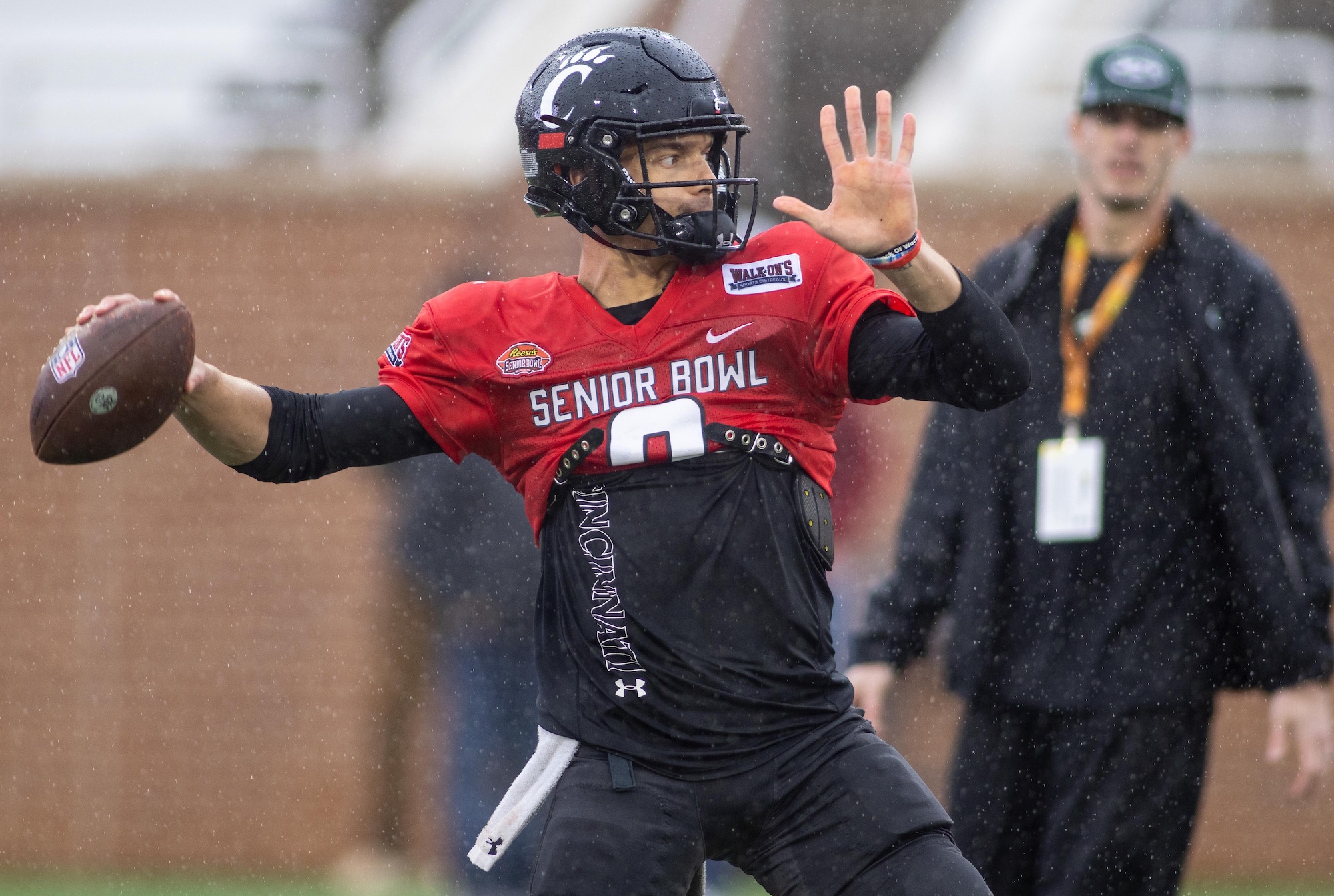 After a shaky first Senior Bowl session in which Desmond Ridder looked to represent a shell of the player we saw lead Cincinnati to its first-ever College Football Playoff appearance this fall, day two in Mobile rid of Tuesday’s demons. A dynamic dual-threat talent whose performance this week will weigh heavily toward where he ultimately lands in the battle for QB1, and subsequently where his name comes off the board on draft night, while Wednesday afternoon’s conditions couldn’t have been much worse for quarterbacks, Ridder proved to those in attendance he remains firmly in the conversation for dibs atop the signal-caller totem pole as we head into the NFL Scouting Combine in just a few weeks’ time. In what was a nasty day here in Mobile, as swamping rain and wind swirled throughout Hancock-Whitney Stadium for the duration of individual and team drills for the National Team, Ridder looked unfazed to the surrounding circumstances delivering on time with plenty of zip on each of his reps. While fellow quarterbacks Kenny Pickett (Pittsburgh) and Carson Strong (Nevada) enjoyed their fair share of throws that made you grimace upon review, Ridder, a smooth talent by trade who has consistently operated at his own speed throughout his career, looked calm and poised in the pocket with violent tendencies in his throws that spiraled tightly through the rain all afternoon. The clear standout of the early group, what impressed most when microscoping Ridder’s performance Wednesday was his consistent accuracy, fluidity in his reads, and ability to pump the ball through receivers’ chests All. Day. Long. Whether it was an intermediate dart through traffic to tight end Jeremy Ruckert (Ohio State)—who made a nice play on the ball on the boundary—or a consistent ability to drop the ball in a bucket 35 yards downfield, there weren’t many boxes Ridder didn’t check on day two for teams looking for answers to the questions he left unsolved on Tuesday. An event in which every throw has a lagging tail of weight attached to it as talent evaluators look to finalize their boards and ultimately check off boxes on each available quarterback, Ridder, at least for Wednesday, looked like the talent teams could hitch their wagon to moving into the summer months.