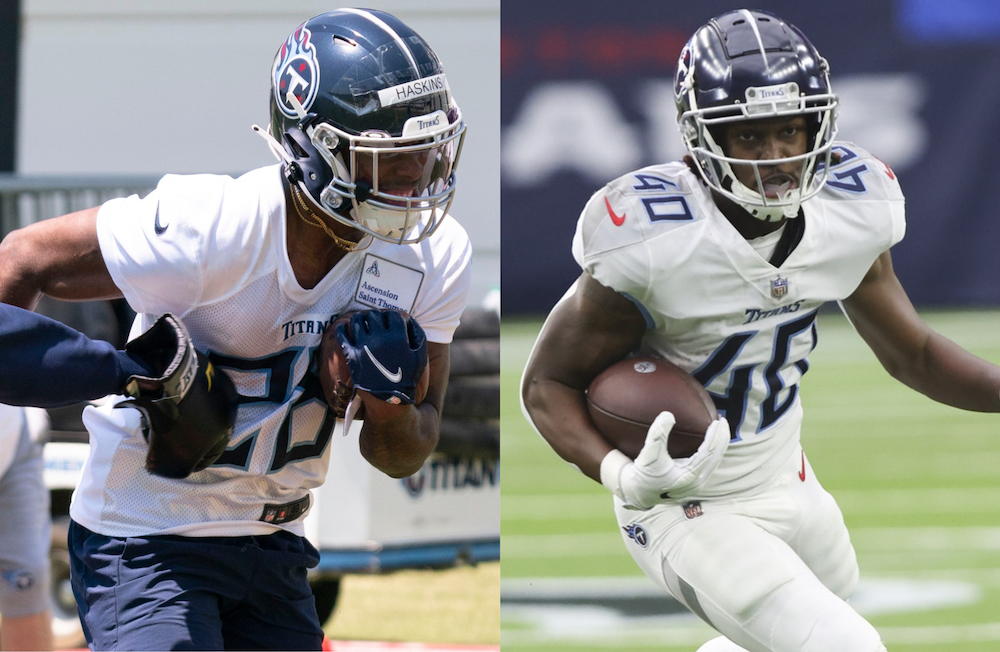 Who Should Be Derrick Henry’s Backup?

One of the most physically gifted athletes in our game, it’s no secret who running back Derrick Henry is and what he’s capable of each time he touches the football. An overpowering blend of herculean strength and speed, while injury hampered his impact last fall, he enters 2022 primed to not only eclipse the 1,000-yard mark for the fourth time in his career but once again prove to be the catalyst for the Tennessee Titans offense.

Behind him, however, is where questions arise as Dontrell Hilliard and first-year talent Hassan Haskins are set to compete for the primary backup role in camp. A position of the utmost importance within a Titans offense that looks to ground and pound their way to victories, making the case for both Hillard and Haskins as Henry’s back-up presents two intriguing ball-carriers that should play themselves into substantial carries in 2022.

The Case For Hassan Haskins

An impressively constructed talent at 6-foot-2 and 228 pounds, you can see why General Manager Jon Robinson was so high on the former Michigan back as another physical downhill runner to pair with Henry. Blessed with an NFL frame, while the power back has room to grow in his functional ability between the tackles when met with athletically inferior linebackers, he’s a tough, hard-nosed runner with surprising athleticism in the open field, where he’s proven to run through, around, and over defenders to reach open grass.

While he and 2023 draft-eligible talent Blake Corum shared the workload for Jim Harbaugh’s Wolverines last fall, the transition to the pro game—where he will share carries with Henry—should present a seamless transition in year one. Although it’ll take time to adjust to both the physical nature and the speed of the pro game, Haskins possesses an intriguing array of traits that should make Titans Head Coach Mike Vrabel feel comfortable enough to hand him the ball early this fall.

The Case For Dontrell Hilliard

Henry’s primary backup during offseason workouts this spring, it looks as if Hilliard has the upper leg on Haskins as we approach camp. After averaging a gaudy 6.3 yards per carry on 56 attempts last fall, while Hilliard—sub-6-foot and a tick over 200 pounds—would provide more of a lightning to Henry’s thunder this fall, that change of pace would present a unique dynamic to counter for opposing defenses. A special teams contributor as well in eight games, there isn’t much Hilliard can’t do.

For someone who popped at times throughout his five starts in Henry’s absence, in a ‘what have you done for me lately’ league, Hilliard’s success sits fresh in the mind of Vrabel, and the RB2 role looks like his to lose. From entering the league as a UDFA to spending time on the practice squad to backing up D’Onta Foreman in spurts last season, Hilliard is much more than a feel-good story and is someone Tennessee could rely on heavily once again if *knock on wood* Derrick Henry spends any amount of time on the shelf.