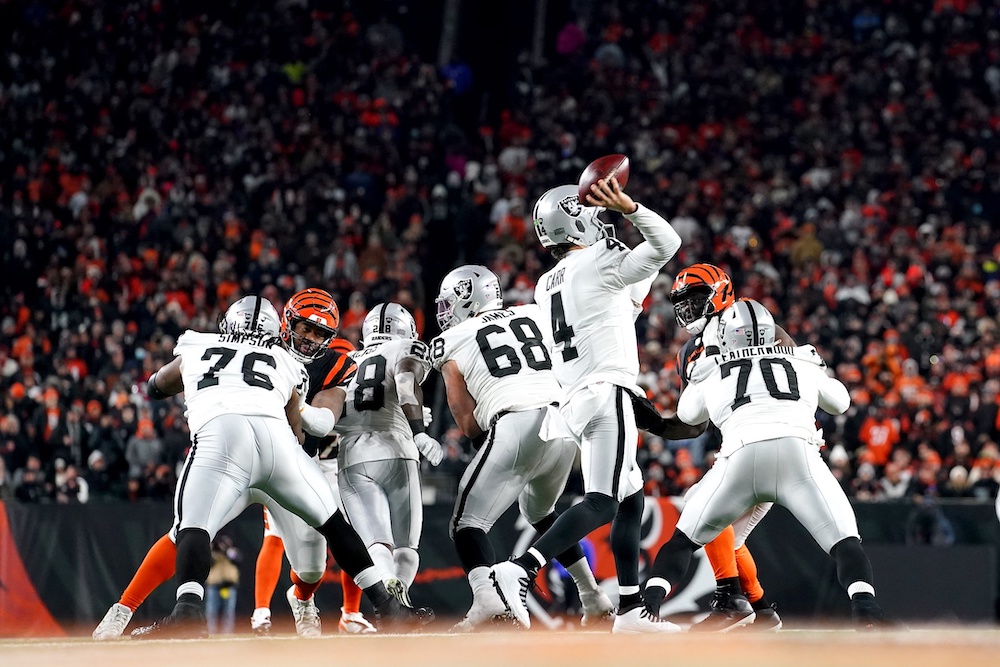 On Tuesday morning, after eight years of playing in the NFL, as well as plenty of speculation about his future, Las Vegas Raiders quarterback Derek Carr got his bag. He signed his second NFL contract extension, this one for three years and $121.5 million, to stay in Las Vegas with the team that had drafted him back in 2014. In return, the Raiders get some much-needed stability on their roster (and within the organization).

While Carr has been a good quarterback for the Raiders since he entered the league, getting another contract extension was by no means a guarantee.

For one thing, despite his overall solid performance on the field, it hasn’t really translated into success. Carr’s undoubtedly been more successful than his more highly-touted older brother, but the Raiders have only made it to the playoffs twice in the last decade.

In 2021, the 10-7 record Las Vegas posted was the second-best they’d had since drafting Carr; only a 12-4 campaign in 2016 was better. And though they made the playoffs in each of those two years, the Raiders went on to lose in the Wild Card Round both times.

That lack of success isn’t all Carr’s fault. For one thing, he got injured ahead of the playoffs in 2016, so he was unable to continue his fantastic regular season performance in the postseason. In addition, the Raiders have had to deal with a lot of turmoil on the roster and as an organization since he joined the team.

After thriving for three years in Oakland, earning three Pro Bowl nods under the Jack Del Rio regime, Carr got himself a five-year extension. But after an unsuccessful 2017 campaign, the Raiders brought back Jon Gruden to replace Del Rio in 2018. Gruden hadn’t coached in a decade and hadn’t been with the Raiders since 2001. Suddenly, he’d been given not only the head coaching job but full control over the roster, too.

Gruden put together one of the oldest rosters the NFL had seen in years and the team went on to lose 12 games just two seasons after winning as many. Carr put up his least productive season with a still-career-low 19 passing touchdowns, which put him bottom two in the league of quarterbacks who had started all 16 games. Only Denver’s Case Keenum (18) had fewer.

However, Carr’s production steadily increased in the following years under Gruden and the team won more games.

In 2020, the Raiders suffered a late-season collapse that left them just short of a playoff berth. The fault then still lay with the roster’s shortcomings, particularly on defense, and not on Carr. Vegas finished the 2020 season with the third-worst scoring defense in the NFL. Only the 5-11 Lions and 1-15 Jaguars were worse. Carr and the Raiders, meanwhile, had managed to win eight games.

Within a month, the Raiders lost:

-Head Coach Jon Gruden, who resigned in disgrace after reports came out that he had used racist, misogynistic and homophobic remarks in emails he’d written over a 10-year period

-wide receiver Henry Ruggs III, who was arrested then released by the team after he killed a 23-year-old woman in a crash whilst driving under the influence in Las Vegas

-cornerback Damon Arnette, who the team released after he posted videos on social media making death threats while holding a gun

Somehow despite it all, the Raiders finished 10-7 in the regular season and returned to the playoffs for the first time since 2016. It was a short-lived playoff run once again though, as they lost to a team-of-destiny Bengals squad in the Wild Card Round. Carr led the team to within nine yards of tying it in the game’s final two minutes, but he threw an ill-timed, goal-line interception with 14 seconds left to seal the Raiders’ fate.

Even after all the turmoil Carr had dealt with and in spite of the personal success he found along the way, his future with the team was still very murky after the 2021 season ended. Las Vegas hasn’t won a playoff game since they drafted him in 2014 and regardless of his personal performance, not having the wins to show for it is enough to make a team uneasy.

On top of that lack of wins, the Raiders already committed to turnover elsewhere within the organization. They fired General Manager Mike Mayock in January, right after their postseason loss to Cincinnati, and all signs pointed to interim Head Coach Rich Bisaccia not returning to the team in 2022.

The Raiders could have completed a clean sweep of the organization by letting Carr’s contract run out after 2022, then allow their new head coach-general manager tandem to replace him. Given the current state of competition in the AFC West — Carr has ended up the weakest quarterback in a division that now has Russell Wilson in addition to Mahomes and Herbert — finding an upgrade in next year’s draft class with more quarterback talent would make sense.

Instead, Las Vegas doubled down on Carr. First, they made a blockbuster trade for Davante Adams earlier this offseason, giving their quarterback a lethal weapon out wide. Then, on Tuesday, they made their commitment to Carr official with a three-year extension.

In keeping Carr around, the Raiders ensure they’ll have roster stability at the most important position in sports for an extra three years. They are also allowing the quarterback to focus on his on-the-field responsibilities without worrying about high performance in a contract year. Finally, they show their fans and the rest of the league they’re going to try and contend, even in the toughest division in the NFL.