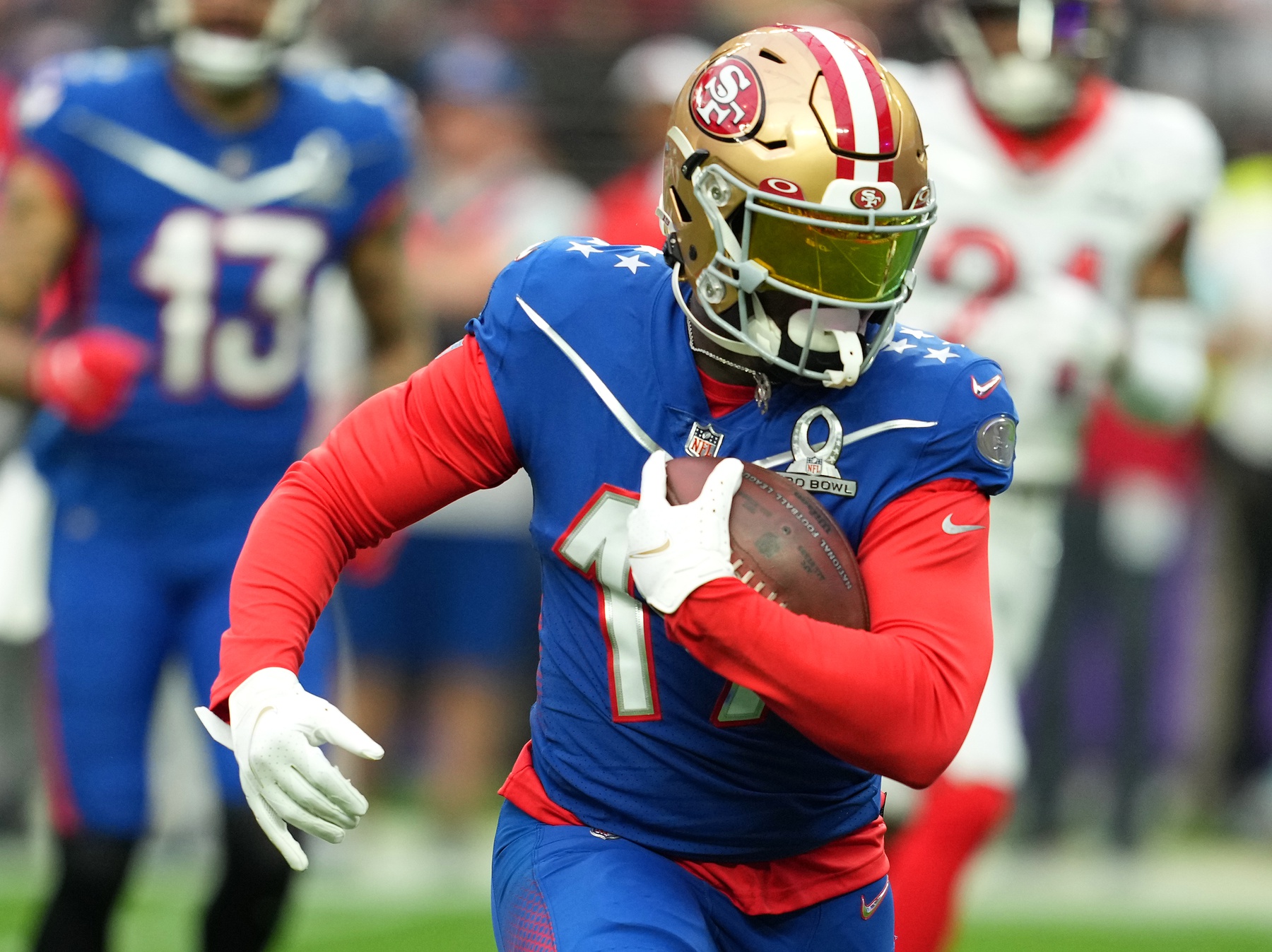 In absolute bombshell dropped on Tuesday evening. According to multiple reports, San Francisco 49ers wide receiver Deebo Samuel is considering requesting a trade away from the 49ers due to a contract dispute. The 36th overall selection in the 2019 NFL Draft, Samuel is currently scheduled to enter the fourth and final year of his initial four-year rookie contract. Samuel is set to earn just $3.986 million in 2022, via Spotrac. It qualifies as significantly less than what he’s earned and deserves following a 2021 campaign that saw Samuel total an astounding 1,770 total yards of offense and 14 touchdowns (six receiving, eight rushing) while revealing himself as the most unique and dynamic weapons in all of professional football. The 49ers don’t have a fifth-year option on Samuel’s contract, because he wasn’t a first-round selection.

Earlier this month, it was reported that Samuel wanted to become the highest paid non-quarterback. If that report is accurate, and we have absolutely no reason to doubt its validity, Samuel wants to top the contract Tyreek Hill received earlier this offseason from the Miami Dolphins that pays him roughly $30 million annually. It’s a sizable number, but Samuel had a legitimate argument to capture Most Valuable Player honors last season.

With the 2022 NFL Draft fast approaching, a potential Samuel trade has thrown another wrench into your mock drafting plans. We’ve identified three teams that should strongly consider trading for Samuel.

Jets General Manager Joe Douglas has been extremely public with his interest in acquiring an elite receiver to round out his ascending offense. The Jets made a valiant effort to acquire Hill from the Kansas City Chiefs before Hill ultimately decided to join the Dolphins instead. The Jets have also been loosely linked to D.K. Metcalf and A.J. Brown, two other second-round receivers from the 2019 draft class that are due significant raises in pay – though neither player appears to be legitimately available for trade. Samuel could now be a much more realistic option for the Jets due to recent developments.

According to ESPN’s Adam Schefter, Douglas allegedly offered the Chiefs the No. 35, No. 38 and No. 69 overall selections in the 2022 NFL Draft in exchange for Hill. It would likely take a similarly aggressive offer to pry Samuel away from the 49ers, but there’s little reason to believe Douglas wouldn’t happily pay it based on his recent actions. Samuel is the most unique offensive weapon and would slot in nicely next to a budding offensive cast that includes quarterback Zach Wilson, Elijah Moore, Corey Davis, C.J. Uzomah, Laken Tomlinson, Alijah Vera-Tucker, Tyler Conklin, Michael Carter and Braxton Berrios, to name a few. Don’ t look now, but the Jets are potentially building something special on offense. Samuel would be quite the cherry on top.

49ers General Manager John Lynch would likely have little-to-no interest in trading away his best offensive player to a inner-conference rival and common postseason opponent such as the Packers, but that doesn’t mean Packers General Manager Brian Gutekunst shouldn’t make an aggressive attempt. As things stand, Green Bay is currently set to enter the 2022 season with Sammy Watkins, Allen Lazard, Randall Cobb and Amari Rodgers rounding out their pass-catching corps. It represents a less-than-ideal position group for an elite, but aging quarterback such as Aaron Rodgers. The Packers’ Super Bowl window lives and dies with how much time Rodgers has left under center and Gutekunst must push his chips into the middle of the table as long as Rodgers sticks around. That may only mean one or two more seasons.

The blockbuster trade that sent disgruntled superstar receiver Davante Adams to the Las Vegas Raiders has significantly weakened the Packers. It’s worth noting Gutekunst possesses two first-round selections in next weekend’s draft as a result of the Adams trade, and the Packers are largely expected to finally use one of those selections on a receiver. But as always, the draft ultimately represents a crapshoot, and the Packers should have interest in acquiring a sure thing such as Samuel. They possess the draft capital and cap space ($14 million) necessary to consider making such a move.

Let’s. Get. Wild. You thought acquiring Hill meant the Dolphins were done? Guess again. General Manager Chris Grier has been the most aggressive chief decision-maker in the National Football League this offseason. In addition to securing Hill’s services, Grier has further improved his offense by also signing several starting unrestricted free agents such as Terron Armstead, Cedrick Wilson, Chase Edmonds, and Connor Williams, to name a few. The Dolphins somehow still possess $21.4 million in available cap space, via Spotrac. Only the Houston Texans and Carolina Panthers currently have more financial freedom to their name.

We also realize just because the Dolphins can afford Samuel doesn’t necessarily mean they should. There’s a fair amount of caution to consider. The main reason behind Miami’s fruitful financial situation is large in part due to the fact that starting quarterback Tua Tagovailoa is entering his third season and is set to earn a base salary of $895,000 in 2022 while carrying a manageable cap hit of $8.256 million. Miami’s front-office brass isn’t completely sold on Tagovailoa, which means they may want to leave themselves the financial wiggle room necessary to upgrade at quarterback should the former Alabama standout flame out with his impressive new-look cast of offensive weapons. There’s plenty to consider, but Grier could further signal his intentions by acquiring Samuel.