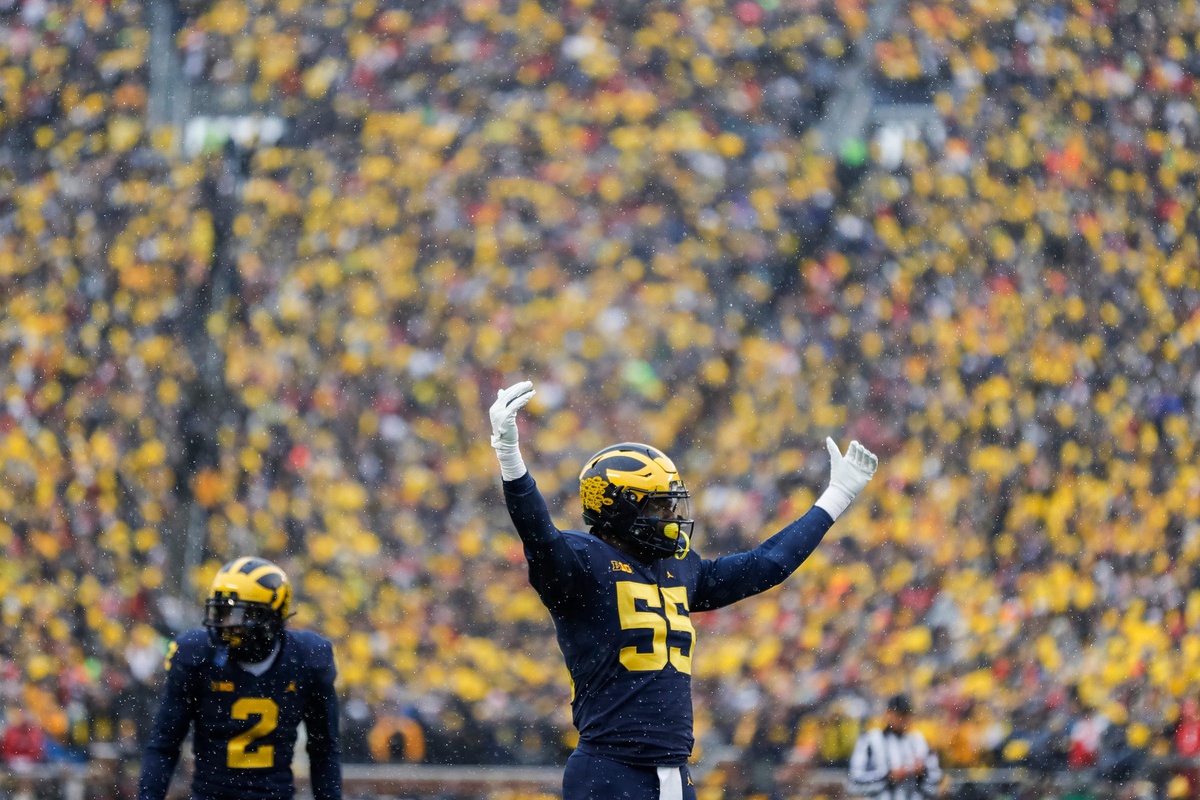 There Is No Ceiling On David Ojabo’s Upside

Anative of the quaint town of Blairstown, New Jersey by way of the shores of Scotland, by way of Port Harcourt, Nigeria, the path to the draft has been a winding road of obstacles and hurdles for Michigan’s David Ojabo. A newborn to the sport in comparison to what is arguably the deepest position group of any in the class, although his childhood past introduced him to the game he relates so fondly to today at a later stage, the second-team All-America selection this fall is using his football innocence to drive his stock toward the top of the draft.

“When I first started playing I was getting smacked around by little dudes,” Ojabo said. “I’m a natural-born competitor and that didn’t sit right. I had to flip a switch.”

While it proved to be more of an industrial-sized lever that Ojabo rolled over, whoever those ’little dudes’ were that embarrassed Ojabo at the start of his football career, they deserve a small slice of the credit for the type of athlete, NFL prospect, and one-of-one talent that kickstarted a potential illustrious pro career for the former Wolverine.

A talent—comparatively speaking—that received minimal spotlight compared to the glaring beacon that remained centered on potential No. 1 overall selection and opposite edge threat Aidan Hutchinson, if it weren’t for the presence of the Heisman semifinalist the last few campaigns Ojabo said, the 6-foot-5 blend of agility and herculean strength “wouldn’t be where he is today.”

“I tried to mirror everything he [Hutchinson] did. The way he trained, prepped his body, it helped me get to be where I am now with this opportunity.”

A duo that evolved quickly into one of the more imposing tandems in the country, as Ojabo went, Hutchinson went, and vice versa throughout Michigan’s first-ever trip to the college football playoff. Two equally athletic marvels out at 5-tech, long story short, make sure your DVR is set for when Ojabo digs his cleats in to run the 40 tomorrow evening.

Expected to dazzle, the comparisons of Ojabo and Baltimore Ravens’ 2021 first-rounder Odafe Oweh have made their rounds throughout the halls of the Indiana Convention Center due to their similar profiles and projectability at the next level. However, tallying a time under 4.36 is a whole ‘nother ball game, and, resultantly, could hurdle Ojabo into the middle, or earlier processions of the first round come draft night.

A prospect from small beginnings with a world traveler’s background, the spotlight entering the draft now couldn’t be brighter encircling one of the class’ most athletically-gifted defenders. A story of perseverance whose performance ceiling remains uncapped, Ojabo’s newest chapter has yet to be written.