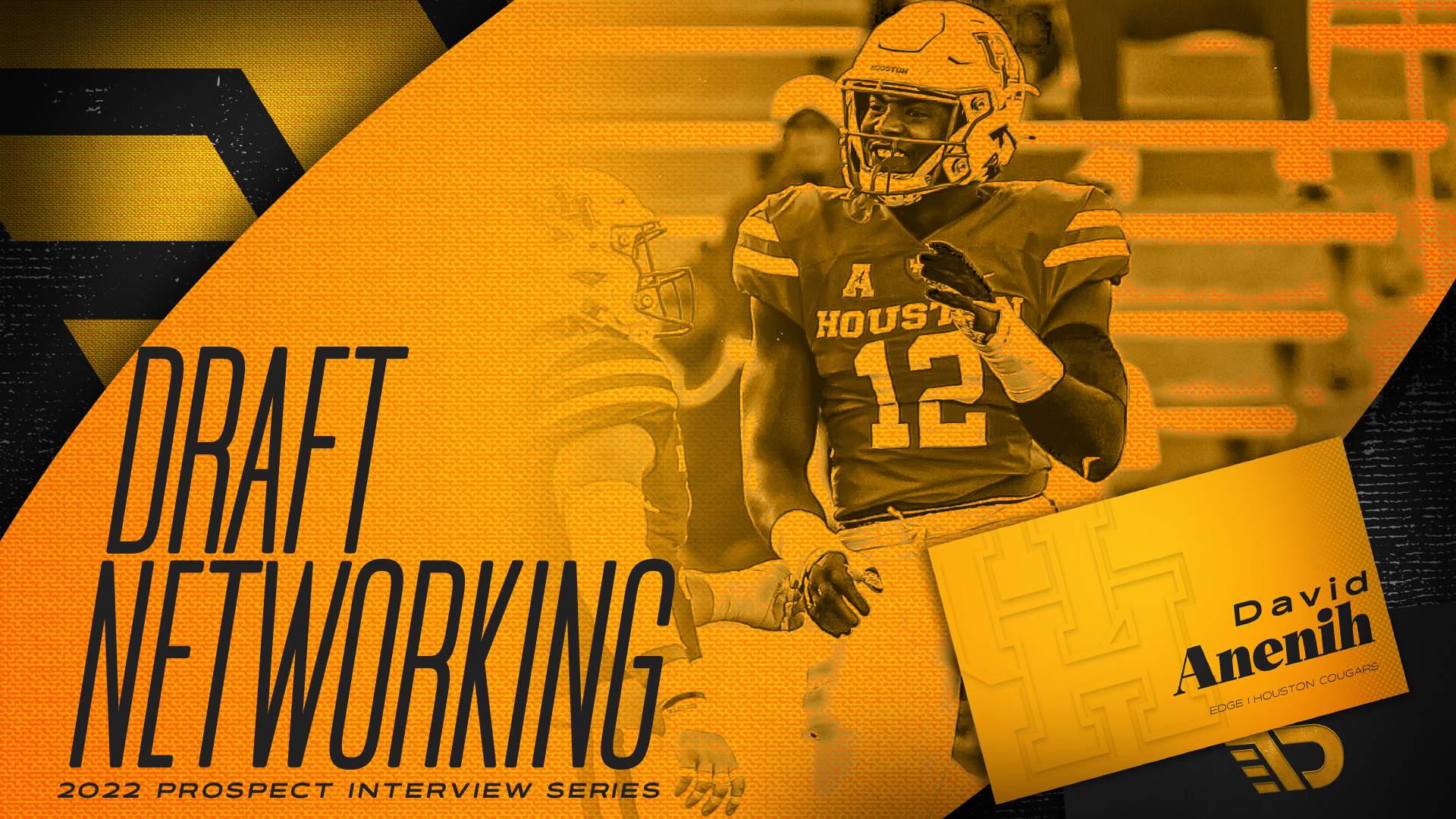 NFL teams searching for pass-rushing help in the middle rounds should be paying close attention to Houston’s David Anenih. The versatile EDGE defender recorded an impressive 20.5 sacks throughout a successful five-year tenure as a Cougar. Anenih formed a haunting pass-rushing duo alongside Logan Hall this past season. Anenih’s first-step explosiveness and flexibility allow him to threaten opposing pockets.

Anenih recently spoke exclusively with The Draft Network regarding his impressive collegiate career at Houston, his exciting pass rush arsenal, teaming up with Hall in Houston’s front seven, which teams have shown interest in securing his services throughout the pre-draft process, and so much more.

JM: You recorded 20.5 sacks in five seasons at Houston. You consistently got after quarterbacks. How do you reflect on your time as a Cougar?

DA: I really enjoyed my five years at Houston. I still remember my beginnings at Houston. At the time, the outside linebackers coach was Dan Carrel. He’s really the reason I went to Houston to begin with. I had a great relationship with him. We really had a special bond throughout the recruiting process.

We ran a 3-4 defense throughout my first two seasons at Houston. That coaching staff ended up getting let go. Coach Dana Holgorsen ended up coming in and bringing a new staff with him. I spent three years under that staff and things went really well. They helped me take my game to the next level. I got better every year at Houston. That’s how  I would reflect on my time at Houston.

JM: You had a great run in Houston. You recorded at least four sacks in four consecutive campaigns. What can you tell me about your pass rush arsenal? I’m looking for go-to moves, counters, and so on.

DA: My go-to move is the chop-dip-rip. I have a lot of confidence in my arsenal, and in that move specifically. I don’t think there’s another pass rusher in this draft class that executes that chop-dip-rip move at a better rate than I do. I’m a speed rusher at the end of the day. I’ll hang my hat on my flexibility and first-step explosiveness. I can turn the corner and win the edge. I take a lot of pride in my ability to get off the ball. I don’t think there’s another prospect in this class that gets off the ball like I can.

JM: That move has definitely made you a lot of money. Houston has developed so many exciting pass rushers and defensive linemen as of late, and you’re potentially next in line. What do you attribute that to within the program?

DA: I think that says a lot about the program and the types of talented players we attract. We’re all about the grind and hard work. It also speaks volumes regarding the type of coaching we receive throughout our time at the program. We have a strong culture in place. Our defensive line coach Brian Early has done so much to help develop us as players. Of course, we’ve had guys like Ed Oliver come through the program. It comes down to the talent and our ability to develop it within the building.

JM: There’s no denying the culture. On that same topic, how did you develop such excellent chemistry with Logan Hall? You two teamed up to pester opposing pockets so often.

DA: I’ve been playing alongside Logan Hall for the past four seasons. Our chemistry took a step forward every single season we spent together. I arrived at the program just one year before he arrived. I’ve seen him grow and develop. I know what he does best, and he knows what I do best as well. We formed a great tandem this past season especially. Both of us ended up being first-team All-Conference players. The accolades speak for themselves. We did a lot of great things together.

JM: That chemistry really pops on tape. Have you met with any teams virtually throughout the process? Have you made any Top 30 in-person visits? Do you have any more of these coming up?

DA: I’ve had Top 30 visits with the Minnesota Vikings and Dallas Cowboys. Most recently, I visited the Indianapolis Colts on a Top 30. I just got back from that visit on April 13th.  I’ve met with the Houston Texans as well. I have a visit coming up with the Cincinnati Bengals. Virtually I’ve met with the Philadelphia Eagles and Arizona Cardinals.

JM: There’s a lot of interest in you and it’s easy to see why. You put up some great numbers at your Pro Day. You have 34-inch arms, you weighed in at 250 pounds, and ran the 40-yard dash in 4.66 seconds. You also posted a 37.5-inch vertical and 123-inch broad jump. Do you feel like you surprised some people with that workout?

DA: I don’t think many people were surprised with my athletic testing results. It lined up with what you saw on tape from me. I do feel like I surprised a lot of people with my drills and on-field workout at my Pro Day. I moved around smoothly and efficiently while going through some linebacker drills. I had some linebacker coaches in attendance and they ran the drills. I moved around well, I was very fluid. How well I did in that area may have surprised some coaches and scouts, certainly more so than my athletic testing results, because you can see how I play and run on tape. I think people knew I would put up some great numbers.

JM: That makes sense. If you could pick the brain of any pass rusher in today’s NFL, who would you choose and what?

DA: That’s a great question. I would have to say Von Miller because we’re similar in size and stature. A lot of his game is based around speed off the edge, and so is mine. We’re both around 6-foot-2/6-foot-3, 250 pounds. I think it’s important to watch and learn from guys who are similar to your size as a player. For me, it probably doesn’t make a whole lot of sense for me to watch a bunch of Myles Garrett because he’s 6-foot-6 and 270 pounds. I’m going to watch guys who are closer to my size. I would definitely love to pick Von Miller’s brain and talk about his work ethic and what he sees on tape. I’d love to learn about what he puts emphasis on.

JM: That’s a terrific choice. I’ve really appreciated your time today. In closing, why should a team use one of their draft picks on David Anenih?

DA: An NFL team should draft me because they’re going to get a guy that’s gonna enter that building ready to work from day one. I’m going to work extremely hard at the next level. I love being coached and I’m going to take well to professional coaching. I’m going to add a ton of value to the team immediately, whether that’s through third down sub-packages, or through every phase of special teams. I’m going to start on all four special teams units. That’s what a team is getting in David Anenih.