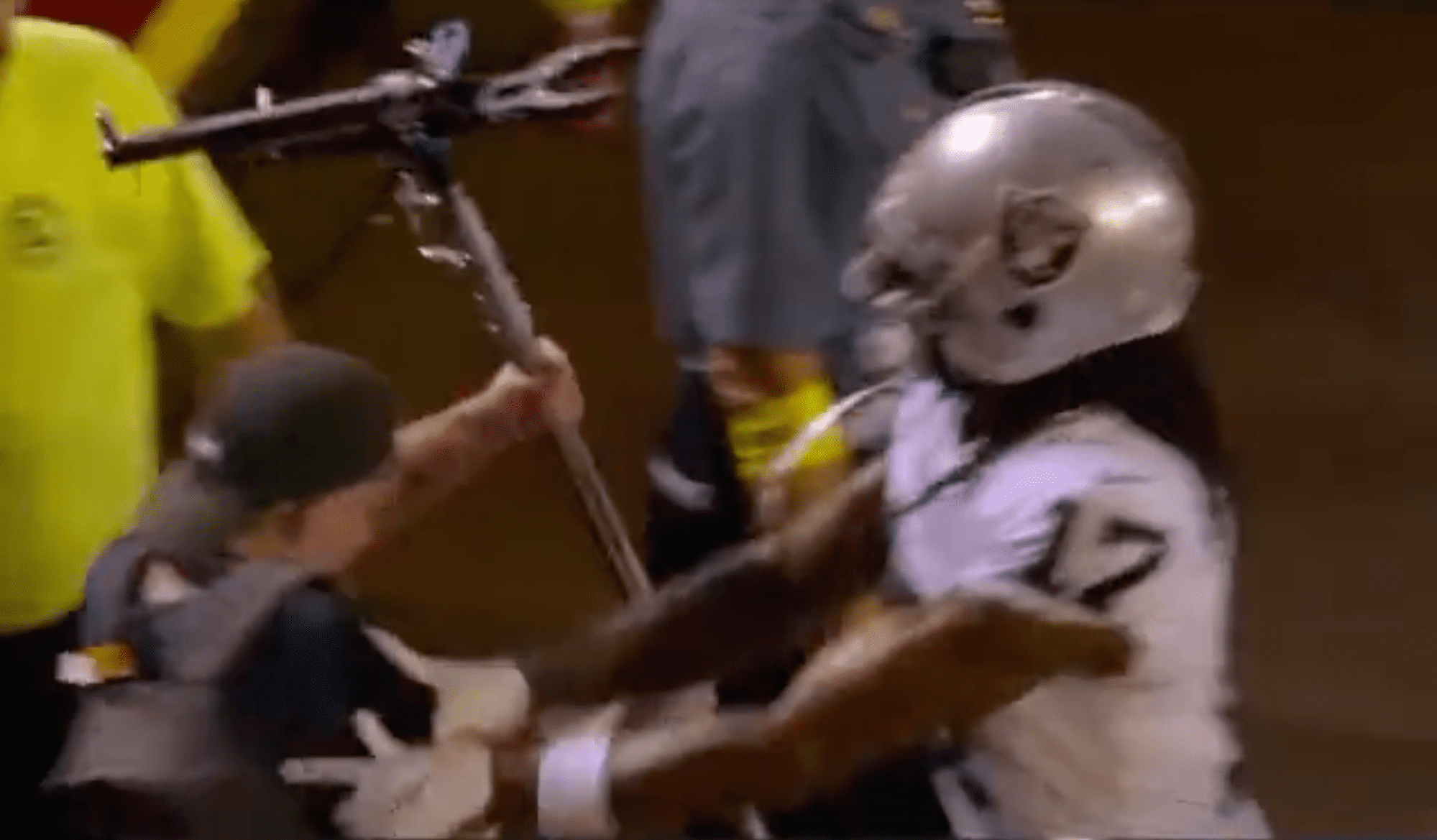 Should Davante Adams Be Suspended For Pushing Cameraman?

The Las Vegas Raiders lost a one-point thriller (30-29) in heartbreaking fashion to their AFC West rival Kansas City Chiefs on Monday. The defeat drops the Raiders to a hapless 1-4. Raiders wide receiver Davante Adams recorded three receptions for 124 receiving yards and two touchdowns. Adams also failed to haul in a crucial third-and-short that would have placed the Raiders within range to attempt a game-winning field goal. Adams took out his frustration by shoving a member of the production team to the ground on his way to the locker room.

Adams may face discipline for his actions, according to multiple reports. Adams should be suspended for his inexcusable decision. Footage of the incident was captured.

Raiders’ WR Davante Adams moments after the Raiders loss to the Chiefs: pic.twitter.com/lEjoOHS7x2

“Before I answer any other questions, I want to apologize to the guy that was running off the field,” Adams said during his post-game presser. “He ran and jumped in front of me when we were coming off the field and I bumped into him and pushed him. He ended up on the ground and I want to say sorry for that. That was frustration mixed with him literally running in front of me. I shouldn’t have responded that way. I want to apologize for that.”

Adams issued another apology via his official social media pages following the incident. The league could also punish Adams via a monetary fine, which Josh McDaniels and general manager Dave Ziegler would prefer as opposed to a suspension. Adams isn’t going to escape unscathed.

Adams’ behavior technically violates the league’s Personal Conduct Policy, which applies to both on-and-off-field incidents. It exposes him to potential discipline even away from the NFL as the person involved filed a police report.

Adams allowed his emotions to dictate his actions following Monday’s soul-crushing defeat. It placed a regular citizen in harm’s way. Adams lost his cool and his momentary lapse in judgment may have caused physical harm. It warrants a short-term suspension at minimum. The Raiders possess a Week 6 bye before returning to the field to play against the Houston Texans in Week 7. Adams’ availability for that must-win contest now hangs in the balance.

It’s straightforward to understand the nature of Adams’ frustration. The Raiders entered the campaign with legitimate postseason aspirations. Acquiring Adams was supposed to help the Raiders close the gap in the unpredictable AFC West. They instead sit at an inexcusable 1-4 and currently own the No. 1 overall selection in the 2023 NFL Draft. At 1-4, the Raiders now possess just an 18% chance of qualifying for the postseason, per FiveThirtyEight’s playoff predictor. It’s not exactly what Adams had in mind when he departed the Green Bay Packers for the Raiders.

Vegas’ offense is still sorting through its difficulties. When extrapolating his current production throughout the course of a 17-game season, Adams is currently on pace to record 98.6 receptions for 1,407 receiving yards and 17 touchdowns. Adams is averaging a career-high 14.3 yards per reception, but the Raiders must get Adams involved with more volume. His on-pace receptions total would be his lowest output since 2019.

He will certainly hear from the league’s decision-makers in some capacity. Precedence indicates some form of discipline will arrive at his doorstep. Adams should face suspension.