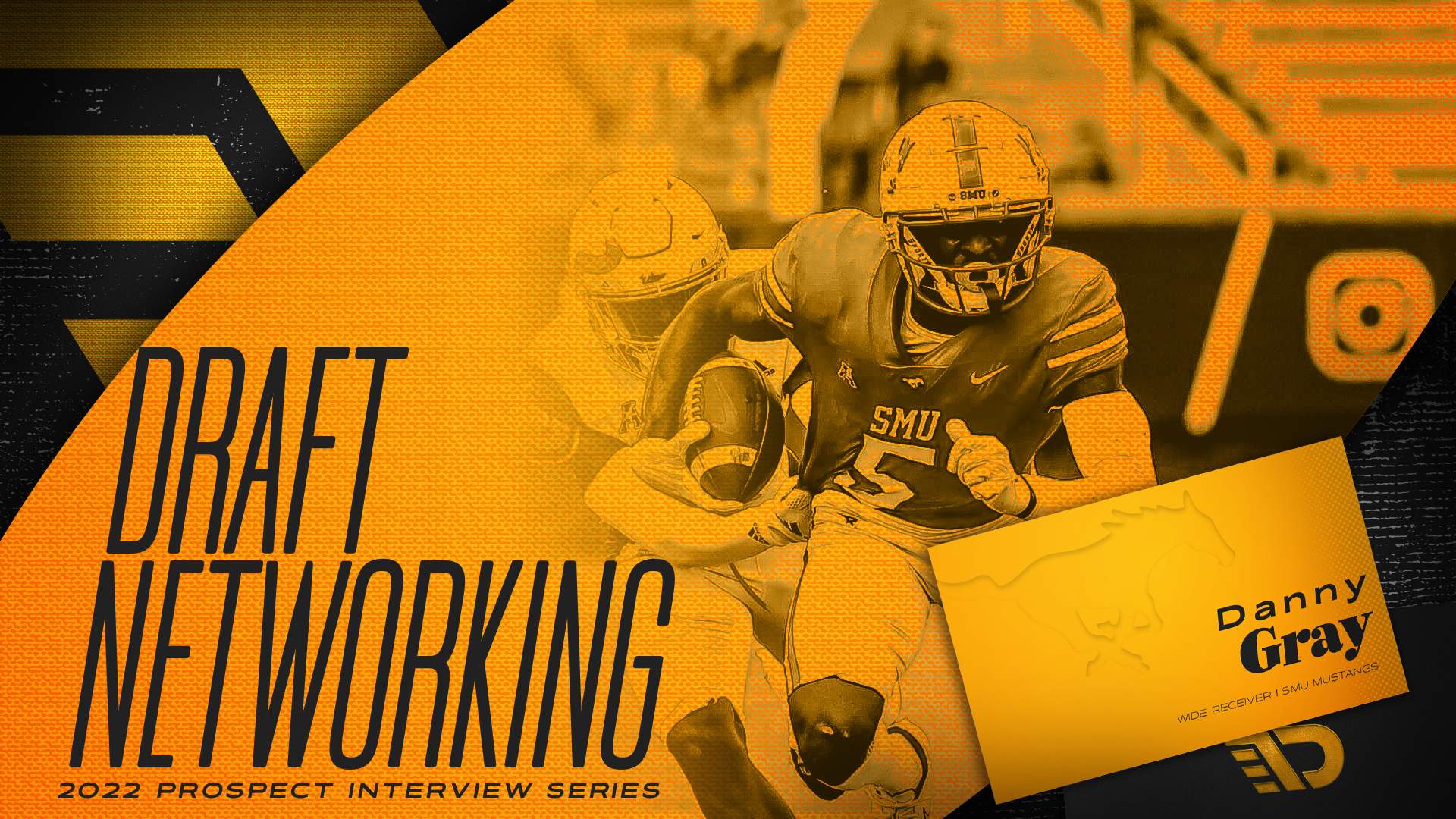 SMU’s Danny Gray deserves your attention. The Southern Methodist talented receiver had an excellent season in 2021 while operating in the Mustangs’ pass-happy offense.

Gray recorded 49 receptions for 803 yards and eight touchdowns while averaging a staggering 16.4 yards per catch. Gray has continued to impress NFL decision-makers throughout the pre-draft process. The 6-foot-2, Dallas, Texas native measured in at 6-foot-2, 199 pounds at the NFL Scouting Combine before running a blazing 4.33 in the 40-yard dash. Gray’s testing results match what we saw from him on tape.

Gray recently spoke exclusively with The Draft Network regarding his electric combine performance and experience, why playing in SMU’s offense doesn’t hurt his prospects in the NFL, his favorite routes to run, debunking the “small school” narrative, and so much more.

JM: You began your collegiate journey in the JUCO ranks via Blinn College. What was your JUCO experience like?

DG: JUCO is tough. I definitely had some obstacles I had to overcome. It made me grow as a man and player overall, though. It wasn’t always the experience I wanted, but I came to realize it was the one I needed. It made me accept the little things and I learned to never settle for less. I worked extremely hard.

JM: You then arrived at SMU ahead of the 2020 campaign, and you exploded this past season by totaling 49 receptions, 803 yards, and eight touchdowns. What allowed you to take that step forward in 2021?

DG: It was really all about trusting myself and trusting the teammates around me. I trusted that everybody was capable of doing their job, including myself. Everything else on the field will take care of itself when you approach the game with that sort of mindset. A lot of that production was a result of staying after practice to catch balls from the quarterback and get in some extra work. We spent time going over the things we learned in practice earlier that day. I routinely stayed late and worked on my game.

JM: You put the work in. You averaged 16.4 yards per reception. Not only are you a downfield threat, but you’re dangerous after the catch as well. How did you develop that aspect of your game?

DG: I’ve always been fast. I allow my speed to take over. I try to take it to the house every single time I touch the ball. That’s always been my personal motto. Make something happen. every time you touch the ball, Danny. That’s what I try to do every time I step onto the field and have a target thrown my way. Let’s go score a touchdown.

JM: You went to the NFL Scouting Combine and ran a 4.33. That’s an incredible result no matter what, but it becomes even more impressive when taking your size into account. It wasn’t that surprising to people that know you. You were a 100-meter dash and 4×100-meter relay state champion at James Madison High School. Have you noticed an uptick in the attention you’re receiving since running the 40?

DG: Yeah, definitely. I’ve noticed I’m receiving a lot more attention since then. I try not to pay too much attention to it, though. I try to remain as humble as I can be. But yes sir, I’m definitely getting a lot of attention now. A lot of teams are hitting me up and showing interest in me throughout the process.

JM: SMU’s offense has a reputation for being simple and friendly to play in. How did playing in that offense help prepare you for the next level?

DG: I loved playing in our offense. We ran the spread. The offense prepared me from a route running standpoint. As a receiver, I had to go downfield and catch those deep balls. I had to go across the middle and run those shallow routes. I took some of those shallows to the house after the catch. It prepared me to play at a higher level in open space. I learned how to create for myself with the ball in my hands. That’s all a result of the offense I operated in.

JM: Some people feel you have a big transition to make at the next level. They say the route tree was simple at SMU. There were a lot of shallow crossers. How do you typically address that question?

DG: The route tree was the route tree at the end of the day. The route tree is going to be slightly different at every program around the nation because that coaching staff is going to want you to run it however they see fit. All I can say is we loved our route tree. We ran nearly the same routes as every other program out there, we just ran them a little differently because every coaching staff has their own little tweaks and preferences. It was the same routes. We got open and scored touchdowns.

JM: There’s no denying the offense was often firing on all cylinders. Do you have a favorite route to run? At the completion of the route, how do you use your size to your advantage? You have terrific size.

DG: I would probably single out the post route. It gives me a great opportunity to showcase my speed and take the top off the defense. We loved doing that at SMU. I think it’s important to go up and attack the ball. That’s really what it’s all about. You have to go up, get up on that defender, and snatch the ball out of the air.

JM: Have you met with any teams virtually or in-person via Top 30 visits, and do you have any more of those coming up?

JM: There’s a lot of interest in you and it’s easy to see why. You’ve aced this pre-draft process, but some analysts are still calling you a “small school” prospect. How do you respond?

DG: I would just instruct them to look at the league today. If you look around the NFL, a lot of stars at my position came from small schools. For example, Cooper Kupp didn’t play at a big-time program. We have a different work ethic at the small schools because we know we’re not going to get handed anything by anybody. We have to put in the work. I’m not saying the big schools don’t produce stars, but at the same time, a bunch of small schoolers make an immediate impact on the league. I’m next in line.

JM: That’s the best way to handle that question. I’ve appreciated your time. What kind of impact is Danny Gray going to make at the next level?

DG: Danny Gray is going to come in and take the top off the defense. Wherever I end up, I’m going to help us score a bunch of points. I’m gonna do whatever the team asks me to do. I’m going to soak up all of the information and learn as much as I can from our veteran players and coaching staff. I can’t wait to learn and work hard. I’m going to try to come in and elevate the team by playing my role.