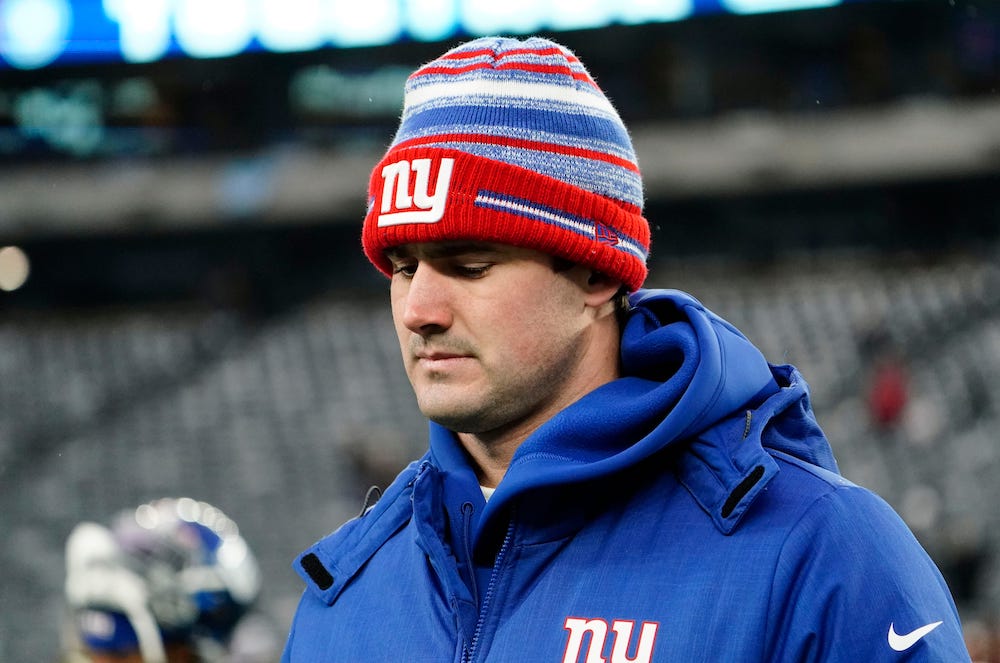 Several intriguing storylines have revealed themselves throughout the early portion of the annual NFL owners meetings. Potentially amending the league’s unpopular overtime rules has served as a hot topic, and rightfully so. Various owners have taken the stand to publicly speak about their team’s current prospects and New York Giants owner John Mara spoke glowingly in regards to starting quarterback Daniel Jones, who is entering a crucial campaign in 2022.

According to multiple reports, Mara offered strong support for Jones by admitting the Giants have failed to place the appropriate pieces around him throughout his three-year tenure as their signal-caller. Mara went as far as to say, “You either have a quarterback or you don’t, and we believe we have one in Daniel Jones.”

Mara’s comments signal a strong support system for Jones, while accepting collective blame for stunting his growth, and they contain a hint of truth. The Giants have undeniably done a poor job building around Jones, both from a personnel and coaching perspective. The likes of Pat Shurmur, Joe Judge and Jason Garrett routinely failed to turn the Giants’ on-field product into a respectable one, particularly on the offensive side of the ball. Former General Manager Dave Gettleman did the Giants no favors in this department throughout his lackluster tenure by consistently swinging and missing in both free agency and the draft. The failure to fix an underperforming offensive line has often doomed a Giants offense that scored just 15.2 points per contest in 2021. Only the lowly Houston Texans fared worse in that department (14.9 points per game).

Taking the next step is imperative for Jones and the Giants have made a wise hire in order to help him attempt to reach his potential. New Head Coach Brian Daboll possesses a forward-thinking offensive mind that helped develop quarterback Josh Allen throughout an exciting four-year tenure as the Buffalo Bills’ offensive coordinator. Buffalo timed Daboll’s arrival with the drafting of Allen, who originally broke into the league as an inconsistent thrower from small school Wyoming. Daboll helped mold Allen’s tools and he hopes to do the same with Jones in East Rutherford.

The former Duke signal-caller is preparing to enter the fourth and final season of his rookie contract. The Giants have until May 2 to exercise the fifth-year option on Jones’ rookie contract but new General Manager Joe Schoen has yet to make a final decision regarding whether or not he’ll exercise the option. All signs currently point to Schoen and the Giants allowing the 2022 season to play out before further committing to Jones, and that truly represents the wisest conclusion for their front office to reach. If Schoen exercises the option, Jones would be under contract for 2023 at a fully-guaranteed salary of roughly $23.3 million. Jones simply hasn’t earned that.

Schoen and Daboll didn’t draft Jones and that ultimately means they should further evaluate the quarterback they inherited from the previous regime before retaining his services beyond 2022. Both Schoen and Daboll have a strong track record of identifying and developing quarterback talent, and they will attempt to improve Jones’ game going forward. The 2022 NFL Draft represents an excellent opportunity for the Giants to better surround Jones in the manner Mara discussed. Schoen currently possesses two draft picks in the top-10 (No. 5 and No. 7 overall), and should walk away with two-game changing prospects.

The cash-strapped Giants have done little in free agency but the signing of Mark Glowinski should improve their right guard situation. Schoen has added various other veteran offensive linemen with starting experience, including Max Garcia, Jamil Douglas and Jon Feliciano. These shrewd additions should lead to some competitive position battles throughout training camp and the preseason, particularly across the three interior positions. With Andrew Thomas growing into his own at left tackle, the hope is that the Giants finally find the right combination of linemen to best protect Jones in the pocket. The right tackle position is still a huge question mark and Schoen could address the position with one of his two first-round selections. Alabama’s Evan Neal, Northern Iowa’s Trevor Penning, NC State’s Ikem Ekwonu and Mississippi State’s Charles Cross qualify as intriguing options.

The Giants still have some intriguing skill players at the playmaking positions. Saquon Barkley, Kenny Golladay, Darius Slayton, Sherling Shepard and Kadarius Toney are all returning to the Giants in 2022, and should offer the desired support for Jones. New York will especially be hoping to see Golladay and Toney take steps forward after their first seasons in New York ended in collective disappointment. Daboll’s creative mind should especially help Toney thrive in his sophomore campaign, as the Giants look to get the football in his hands in space on a more consistent basis.

Schoen and Daboll are the correct leaders to usher the Giants forward. Whether or not Jones will be joining them remains to be seen.