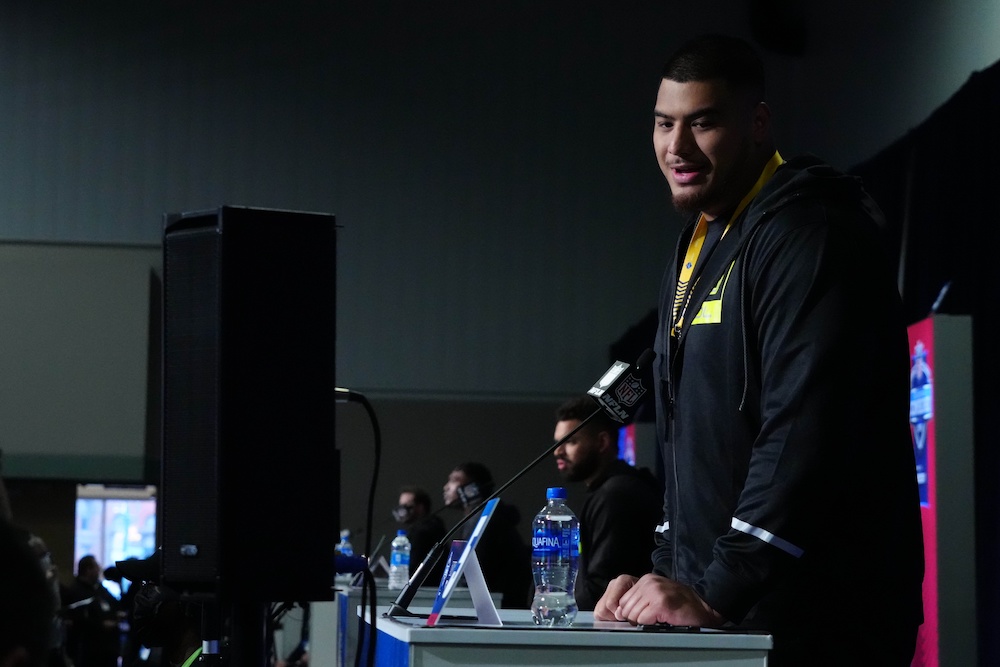 Chicago Bears General Manager Ryan Poles outlined his vision for the offensive line early in his tenure as the team’s top decision-maker. He wants the Bears’ linemen to be more athletic; he wants them to be lighter and quicker and he went as far as to say he even wants different body types than what was on display in 2021. But, sometimes, there are exceptions to every rule.

The 2022 NFL Draft could force Poles to reconsider his desired traits if Minnesota’s mammoth offensive tackle, Daniel Faalele, is on the board when the Bears pick in the second round. The 6-foot-8, 384-pound mountain is a ‘one of one’ prospect among this year’s offensive line prospects. The league rarely sees players with his physical stature and baseline movement skills and he’s the kind of guy who’s an exception to almost any rule general managers have.

According to TDN’s Ryan Fowler, the Bears are a good draft-day match for Faalele.

“With Teven Jenkins expected to start as Fields’ blindside protectant—although the prior regime selected Larry Borom in the fifth round last spring—an upgrade is needed on the right side,” Fowler wrote. “Faalele working opposite the road-grader in Jenkins could provide a sense of identity along the front five. Facing those two tackles when winter sets in early in Chicago could present a real-life example of two ‘Monsters of the Midway.’”

Jenkins and Faalele would instantly become the most intimidating pair of starting offensive tackles in the NFL, but intimidation only lasts if the on-field play matches it. We still don’t know if Jenkins will live up to his pre-draft billing as a bully, but there were promising moments during his rookie season that he’ll be that guy. Faalele isn’t as nasty as Jenkins, but who cares? He’d be the closest thing the NFL has ever seen to Andre the Giant in pads.

Faalele is currently ranked 62nd on TDN’s 2022 NFL Draft rankings. I was convinced he’d be a first-round pick at one point in the draft process, but I’m not so sure anymore, especially after watching him get whooped more than I expected at the 2022 Senior Bowl. But all-star events like that are never a fair fight for offensive linemen. Faalele has quality tape and it’s hard to not be enamored by that size.

The only chance the Bears will have at landing Faalele in the NFL draft is if they use one of their second-rounders on him. I don’t think they’d value his physical makeup highly enough to use the 39th selection on him, but at No. 48? Assuming Poles doesn’t sign a veteran offensive tackle before draft weekend, Faalele would make sense, even if his athletic profile runs counter to what Poles said he prefers.

One of the biggest problems former General Manager Ryan Pace had during his time with the Bears was his loyalty – even stubbornness – to his process and evaluations. He wasn’t flexible enough. He didn’t know when to admit he was wrong on a player or his process. We’re seeing him repeat that pattern with his influence in Atlanta; the Falcons are signing his guys (Germain Ifedi, for example) despite failures on the field. Poles has to avoid that same fate and can’t be so fixated on a prototype that he overlooks a potential stud.

Is Faalele that potential stud? Who knows? But guys with his blend of size and competent movement skills are almost impossible to find. He won’t help the Bears get leaner or quicker but he has a chance to be a really good NFL starter at a position that will protect Chicago’s most important asset: quarterback Justin Fields.