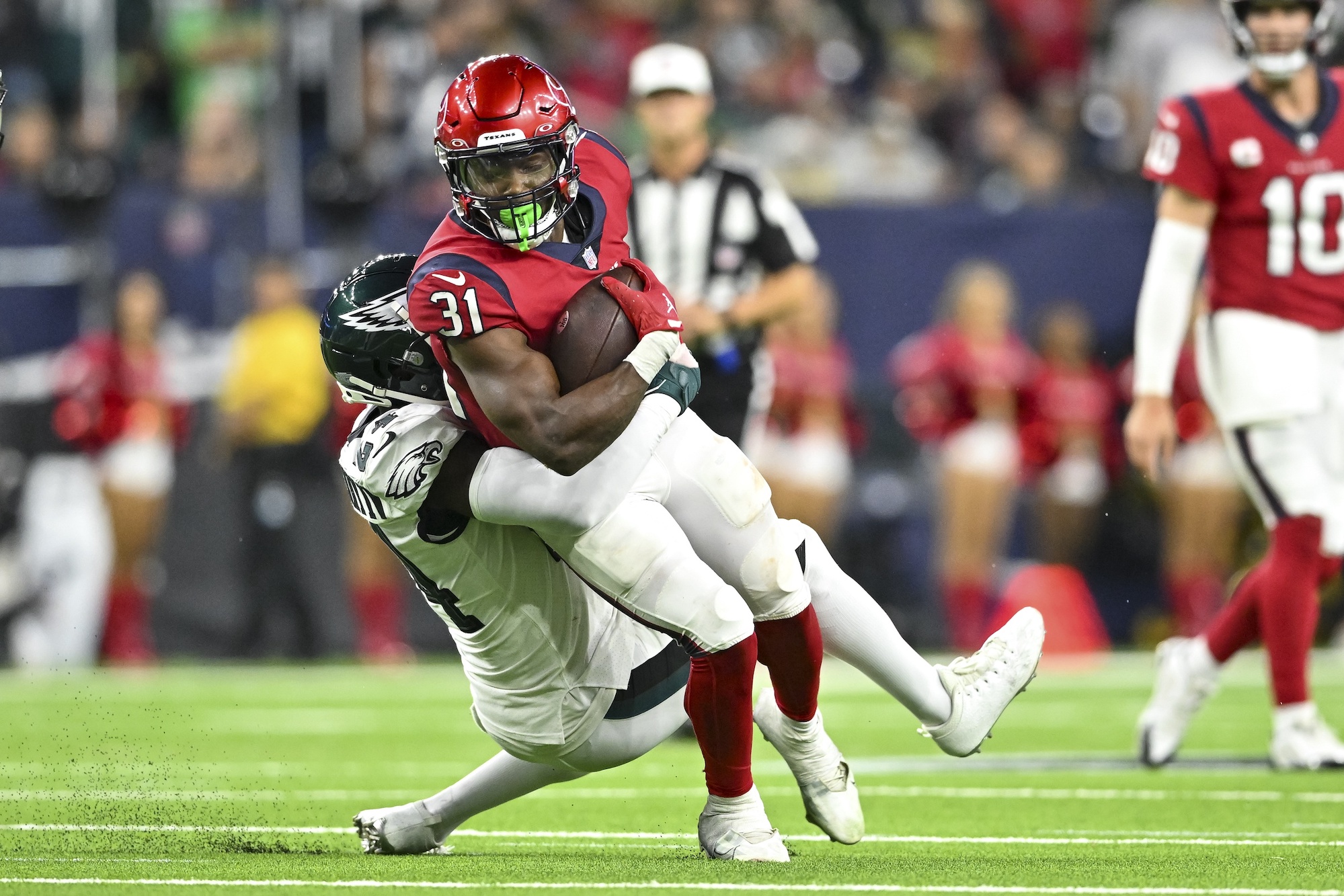 Where Does Dameon Pierce Rank Among NFL’s Best RBs?

The Houston Texans almost executed the unthinkable by upsetting the Philadelphia Eagles on Thursday. The game was tied at 14 apiece before the Eagles separated themselves in the second half, ultimately winning 29-17. Texans rookie running back Dameon Pierce enjoyed yet another standout performance under the bright lights of primetime.

One of the league’s biggest success stories, Pierce is quickly establishing himself as a top 20 running back in the league.

The No. 107 overall selection in the 2022 NFL Draft, Pierce rushed for a career-high 139 yards on 27 attempts against the Eagles’ aggressive defensive front. Pierce averaged 5.1 yards per carry and routinely picked up chunks of yardage via his physical, violent running style. Pierce gained more yards than expected on 14 of his 27 carries, which accounts for a new career high of 51.9% carries above projection, per Next Gen Stats. Pierce now ranks third among all backs in yards after contact leaders with 637. He averaged 5.41 yards after contact per attempt on Thursday. Pierce is helping reset the culture in Houston.

Pierce now ranks fourth in the league in rushing yards with 678. The Bainbridge, Georgia native may remain in the top five at the conclusion of Week 9. It captures how effective Pierce has been throughout his debut campaign. Pierce is a top Offensive Rookie of the Year candidate, but his early-season success catapults him into conversations among veterans. Pierce is currently outproducing several established ball carriers that are largely considered top backs around the league. The sky’s the limit.

Pierce leads the league in Pro Football Focus’ elusive rating. Pierce has been credited with making 50 defenders miss this season, including nine throughout Thursday’s career-best showing. He’ll continue to lead the league in that category moving forward. Pierce leads all first-year running backs in rushing yards (678), yards per contest (84.75), and receptions (20). A dual-threat option, Pierce has scored four total touchdowns, including one through the air.

Pierce is averaging 3.8 yards after contact per attempt, per PFF. He’s accounted for 17 explosive runs (10-plus yards) this season. Houston’s offense essentially revolves around Pierce’s ability to make defenders miss in a phone booth and in the open field.

Pierce is a cornerstone piece for a franchise that remains in rebuilding mode. What Pierce is currently producing is impressive given the less-than-desirable supporting cast he’s surrounded by at quarterback and across his offensive line. Texans general manager Nick Caserio will continue revamping his roster throughout the impending offseason. The Texans are currently projected to possess 11 total picks in the 2023 NFL Draft, including two firsts, two thirds, and two fourths. They have another two first-round picks in 2024.

The Texans currently possess two top-10 selections (No. 2 and 7, the latter of which originally belonged to Cleveland) in April’s draft. In our latest NFL mock draft, in-house scout Keith Sanchez sent Alabama EDGE Will Anderson Jr. and TCU wide receiver Quentin Johnston to the Texans. Such picks would allow the Texans to continue building around Pierce’s greatness.

Caserio found himself a gem when he drafted Pierce in the fourth round. His ascending potential knows no limits. Dameon Pierce will continue establishing himself as one of the most effective backs in the league.