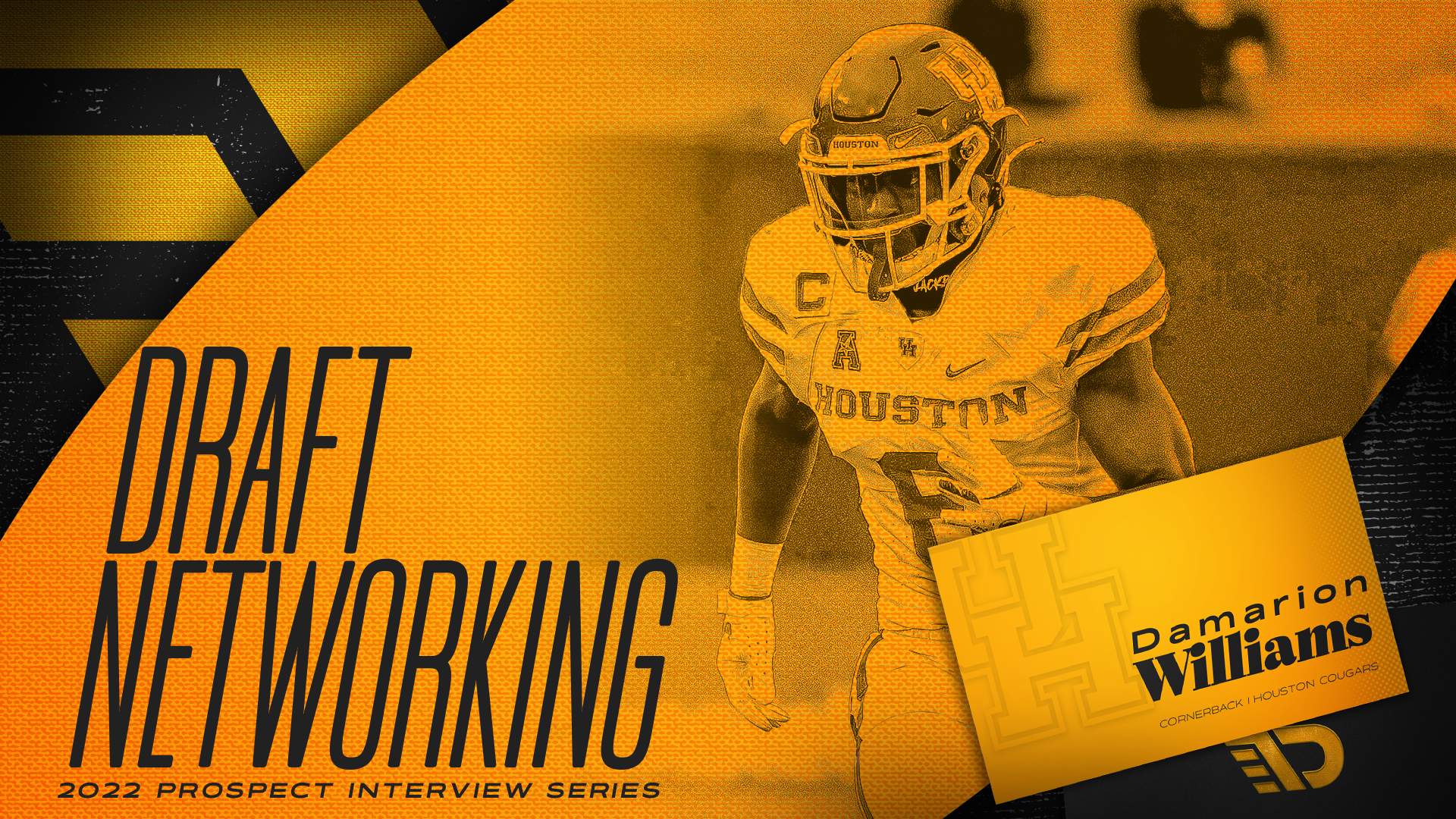 The Houston Cougars fielded one of the most exciting defenses in the nation throughout the 2021 campaign, and several of their key contributors will be rewarded by being drafted in April. Cornerback Damarion Williams is undeniably one of those players. Williams played a crucial role in a ball-hawking Cougars secondary while playing outside cornerback, nickel back, and safety. Williams is one of the most dynamic and versatile defensive backs available in the draft.

Williams recently spoke exclusively with The Draft Network about his JUCO experience, the differences when he arrived at the D-I level, the role he played in Houston’s diverse defense, his experience at the NFL Scouting Combine, how he handles the “undersized” criticism, and so much more.

JM: You arrived in Houston in 2019 after a standout run at Highland Community College where you collected 10 interceptions. What was your JUCO experience like?

DW: It was a great experience. I had to deal with the lifestyle change. JUCO is just so different, you feel like you’re in an extremely isolated situation. We had like two stores around the school (laughs). Walmart was an hour away. I had to make the best of the situation. You’re one of many at the JUCO level that are trying to better their situation. There’s a strict routine involved and it’s the same thing every day. I had to find a routine that worked for me. You had to stay sane. Your teammates help you get through it. You’re all going through the same thing. You have way more spare time at JUCO than you do at the D-I level.

I didn’t start my freshmen year and I played a lot of special teams. I worked my way into the rotation and I made a few interceptions. My sophomore year came around and I became the leader on the team. I made a ton of plays that year. I had a great sophomore season by leading the nation in interceptions and pass breakups.

When you go to JUCO, you’re going to find out if you really love football or not. You’re not getting that D-I support. Nobody watches your games on television. Nobody is reaching out to tell you that you played a great game. I appreciate anybody that supported me through that and found ways to keep up with what I was doing. Do you still love football when the going gets tough? I love football. It was a great experience.

JM: We appreciate you honestly and emotionally recounting that experience. What’s the biggest difference between D-I and JUCO, seeing that you’ve experienced both?

DW: Film study and lifestyle changes are big ones. You don’t have many eyes on you at the JUCO level. Everything changes at D-I. Everybody pays more attention and you really have to watch film to study your upcoming opponents. Game plans can change week to week. We typically kept a simple game plan at JUCO. It was pretty much the same every single week. That’s not the case at D-I (laughs). Game plans change every week. You have to be ready to adapt. In terms of the lifestyle, D-I is fast and busy. You have to avoid the distractions. You don’t have many distractions at JUCO. They don’t care if you do the same thing every single day.

JM: That Houston defense was one of my favorite units to watch this past season, and you were such a key contributor. What can you tell me about the scheme you guys ran, and what your coaches asked of you?

DW: We matched up our best guys on their best guys. That was the scheme. We played a lot of matchup football. We took pride in playing fast and physically. We wanted to dominate every single game. Our game plan was simple every week. We identified who could hurt us on tape, what about their offense can hurt us and we planned to eliminate that threat. We zeroed in on their best players and tried to take them out of the game. We wanted to make life extremely difficult for the opposition. That was the game plan. If there was a guy that needed eliminating, our coaches sent myself and Marcus Jones to handle them (laughs).

If it was a guy in the slot, they sent Marcus and I to handle him. We played a lot of man coverage because we weren’t afraid of anybody. We got in your face and made you work for everything. Playing man takes away a lot of RPOs and things of that nature. We simplified the game by playing man.

JM: You played outside cornerback, in the slot, and at safety. What is it about your game that allowed you to be so versatile?

DW: I have that will about me, I have that “want to” adapt. I love doing different things defensively. My coaches always knew I could do that. My first two years, we had a lot of depth and I couldn’t do those things as a younger player. I couldn’t move around as much. I played corner in 2019 and 2020. The past season came around and we had a lot of players we could trust at the corner spot, so my coaches felt better about opening up the defensive playbook and moving around and allowing me to be versatile. We showed the world what we could really do.

Our coaches had the right players in the defensive backfield and they understood how to use us. He moved me around at safety.  At first, it was just for me to play a specific coverage role. They always knew I was a good tackler, one of the best and most willing tacklers on the team. As a safety, you have to bring some different things to the table.

Every time I lined up at safety, I used to think about Sean Taylor. I wanted to play like him, like I was in his shoes because he’s one of the greatest to ever do it. I wanted to run around and hit everything. My entire life, I’ve never backed down from a challenge. I wasn’t going to start now, you know what I mean? I started playing safety and I was filling those gaps. My coaches were so thrilled with the results that I started getting more looks at safety. We put more of that into our game plans.

On third down packages, I kicked inside and played the slot position. That’s when I played more man coverage. I love playing man coverage. It’s sorta my thing. I went out there and played at a high level. That’s what our defensive scheme was all about. I had to wait my turn and bid my time.

JM: We appreciate the thoroughness. The Cougars defense was so much fun to watch and it’s easier to understand why when you allow us a peek behind the curtain. What was your experience like at the combine?

DW: I had a great experience. It was a lot of fun to spend so much time around my fellow prospects. It was fun to talk with some of the other top guys in the countries while listening to their stories and journeys. I was around some great coaches and had some great interviews. We were talking football at the end of day while getting a feel for one another. I met a lot of new people and made some new friends. I was making people laugh and spreading my good vibes around. I wanted to keep the atmosphere exciting. When I finally reached the on-field portion of that combine, I had so much fun. I was able to move around and show the coaches what I can do.

JM: I thought you looked smooth. Some people are going to label you as “undersized” throughout this process. It’s probably a term you’ve heard before. How do you typically respond?

DW: People are going to talk and I let them say whatever they want to say. You don’t have to be the biggest guy in the room to accomplish the things I’ve accomplished. When people tell me I’m undersized, I really feel like they’re just sharing their admiration for my game (laughs). It makes me feel like they’ve seen what I’ve done on tape and they’re almost surprised. They respect my game at the end of the day. They might not always say it, but I know they do.

I’m out there doing the same things 6-foot-4 cornerbacks are doing, except I’m smoother and faster than they are (laughs). I’m an athlete, man. I’m flying around to the ball. I’m going up against 6-foot-4 receivers and I’m locking them up and taking them outta the game. I’m going up against quick-twitch guys in the slot and I’m locking them up, too. All of that undersized stuff doesn’t mean anything. If you love ball and you know how to play football like I do, you don’t let those things get to you.

JM: That’s a terrific answer and I can’t imagine ending this on another note. I’ve really appreciated your time today. We wish you the best of luck at the next level. What kind of impact is Damarion Williams going to make on the league?

DW: I feel like I’m going to make a big impact. I believe in my versatility and my athletic abilities. I love football at the end of the day. I have the will and “want to” succeed. I’m excited to learn new things and continue improving my craft. I’m gonna move around the defensive backfield, take the ball away and have a lot of fun.

Whatever team drafts me, whichever position I end up playing, I’m just going to focus on being prepared while getting ready to dominate. That’s how I approach the game. I’m going to be ready to match up against some of the best players in the league. I’m always going to put my best foot forward. I’m gonna lock down whoever they need me to lock down. I feel comfortable moving around. It’s a challenge I’m going to accept. I’m ready to play different spots because I’m always willing to adapt. I’m definitely coming in to dominate and help move the organization forward.