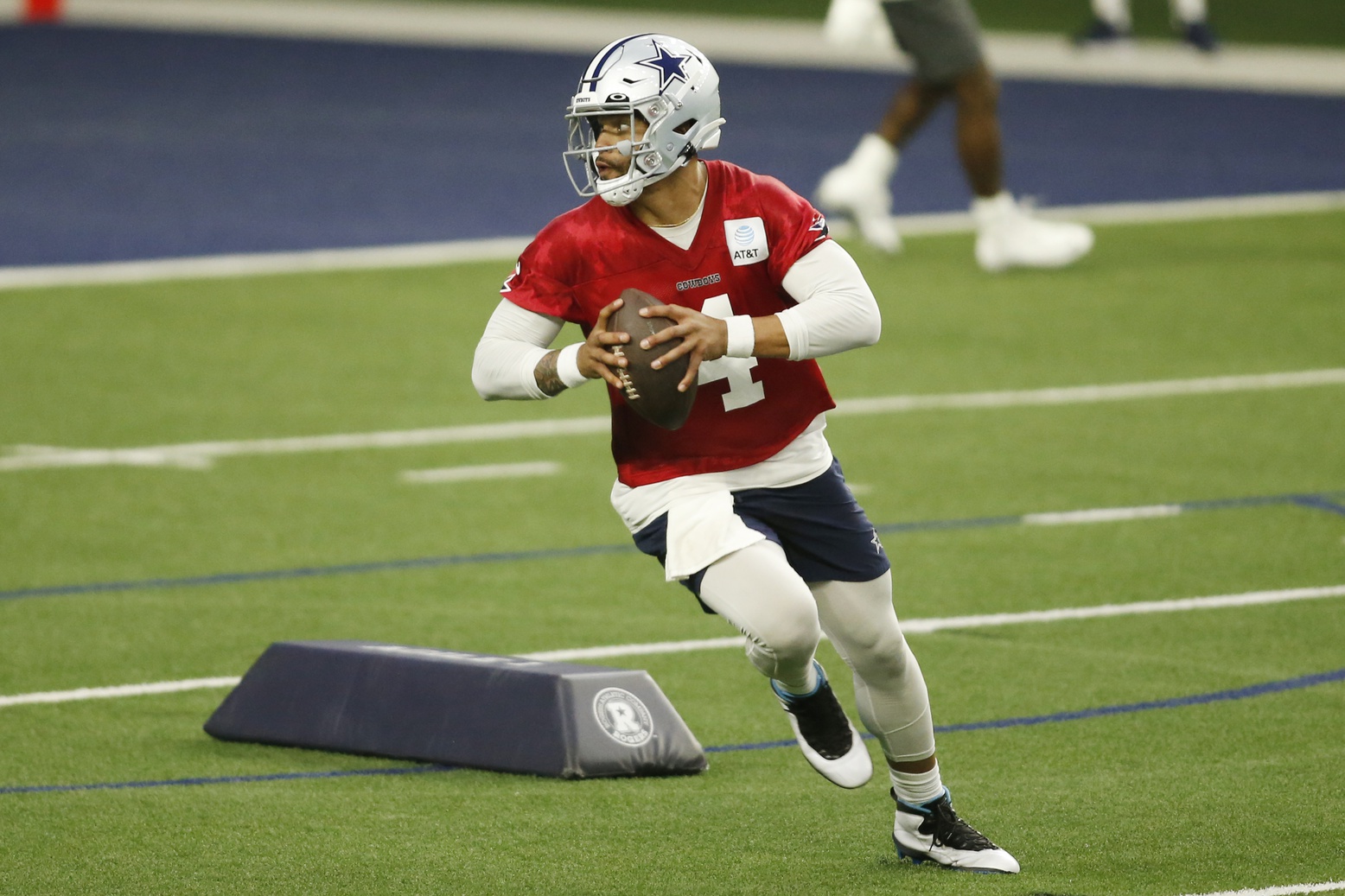 Dallas Cowboys Head Coach Mike McCarthy and Offensive Coordinator Kellen Moore are preparing to make some changes to their offense ahead of the 2022 campaign. McCarthy spoke to the media on Tuesday afternoon following a mandatory minicamp practice and said he hopes to see starting quarterback Dak Prescott have more designed runs in 2022. While it’s understandable why Prescott may be tasked with using his legs on a more consistent basis in 2022 than he did in 2021, it’s a bad idea the Cowboys should avoid implementing.

Prescott suffered a serious ankle injury in Week 5 of the 2020 season that required season-ending surgery. The former Mississippi State standout suffered a compound fracture and dislocation to his right ankle. A lengthy recovery process, paired with an additional lower-leg injury, managed to negatively impact Prescott throughout the 2021 campaign as well. A calf injury suffered in a Week 6 victory over the New England Patriots led to a trend of below-average quarterback play from Prescott for several ensuing weeks. Prescott’s mobility was limited as a result. McCarthy went as far as to admit that the Cowboys “tried to be smart when we used him last year.” Tape analysis of Dallas’ offense last season confirms McCarthy’s sentiments.

While Prescott has looked significantly more mobile throughout the early portion of Dallas’ offseason program, the Cowboys should be wary of exposing him to another lower-body injury by asking Prescott to execute more designed runs in 2022. He’s simply too valuable to the overall success of the franchise to ignore a recent trend of debilitating injuries. Injuries can obviously happen at any given moment in football, and quarterbacks often get hurt in the pocket too, but Prescott’s history of lower-body injuries could especially expose him to further damage on designed runs.

McCarthy also discussed the possibility of tasking Prescott with completing more movement throws in 2022, and this sticks out as a better idea. The Cowboys often avoided asking Prescott to make such throws last year as a result of the ankle and calf injuries, but a clean bill of health means Dallas should feel more comfortable removing those limitations from their offense. Asking Prescott to complete more throws on the run is safer than asking him to execute designed runs.

We wouldn’t be surprised if the Cowboys overcompensated for a less-than-desirable offseason by asking Prescott to do more with his legs, though. There’s also been a discussion surrounding the usage of Tony Pollard and how the former Memphis running back could line up in the slot with more consistency going forward. You can see a pattern emerging as the Cowboys attempt to make up for a laundry list of offseason departures by becoming more creative with their offensive personnel and playcalling.

Bellcow running back Ezekiel Elliott is healthy and expected to be more involved in 2022, but there are other reasons to be concerned about their outlook. The Cowboys traded away superstar receiver Amari Cooper to the Cleveland Browns due to salary-cap-related difficulties. Fellow receiver Cedrick Wilson Jr. signed with the Miami Dolphins. Between these two players alone, the Cowboys have lost 113 receptions and 165 targets from last season. Michael Gallup continues to recover from a torn ACL and may be absent or limited to begin the new season. An uptick in targets for CeeDee Lamb and Dalton Schultz is expected to account for some of the new-found opportunities in Dallas’ offense, but additional creativity will be required.

A questionable revamp of Dallas’ offensive line could also lead to Prescott being forced to be more mobile in 2022. Starting left guard Connor Williams signed a more lucrative contract with the Miami Dolphins and has been replaced with a question mark in rookie tackle-to-guard convert Tyler Smith. Smith was a raw prospect coming out of Tulsa and is expected to experience growing pains as a first-year player. The Cowboys also released right tackle La’el Collins and replaced him with a worse player in Terence Steele.

The Cowboys have lost several important offensive pieces this offseason, both across their offensive line and at the pass-catching positions. Prescott may be forced to rely on his athletic ability with more consistency as a result of off-script playmaking, personnel, and play-calling standpoint. McCarthy and the Cowboys must consider Prescott’s health while working around the talent they lost this offseason.