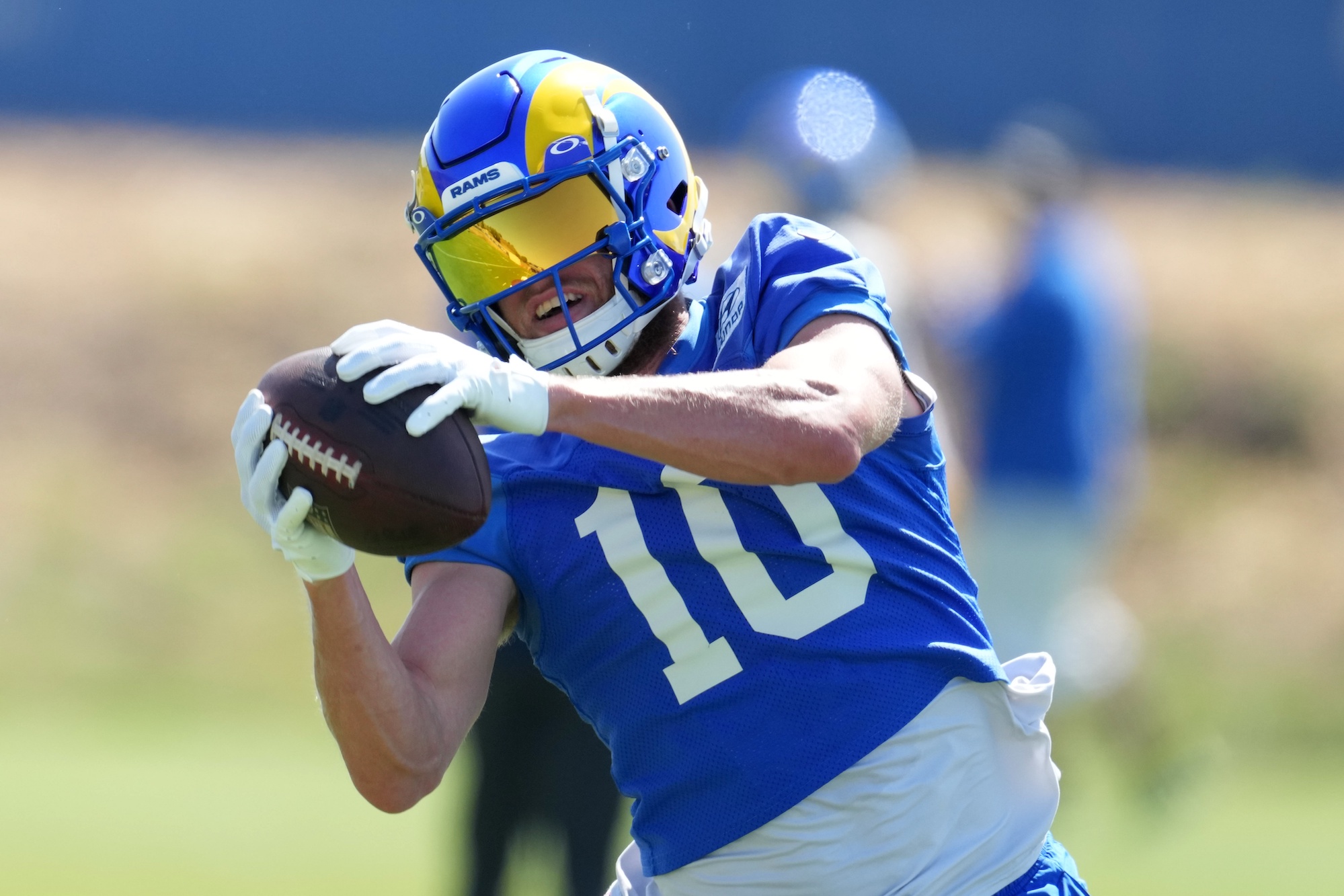 How Quickly Do Rams Need To Re-Do Cooper Kupp’s Contract?

The Los Angeles Rams signed Aaron Donald to a revised three-year contract worth $95 million earlier this week. Rams General Manager Les Snead made Donald the highest-paid non-quarterback in NFL history and the first non-quarterback to eclipse $30 million annually. Snead’s attention must now immediately turn to elite wide receiver Cooper Kupp, who is the next Rams superstar in line to receive a new deal and significant raise in pay.

The 69th overall selection in the 2017 NFL Draft, Kupp is actually less than two years removed from signing a three-year contract extension worth $48 million, including $35.1 million in guaranteed money. That contract has already become outdated based on both Kupp’s performances and the makeover the receiver market has experienced this offseason. Kupp is set to earn a base salary of $14.875 million in 2022. It makes Kupp the 19th-highest-paid receiver in the league heading into this coming season.

Roughly half of the pass-catchers who are set to earn more than Kupp in 2022 signed new contracts this offseason. It’s an accurate representation of how quickly the market moves forward and how Kupp’s 2020 contract extension has already been left in the dust by an aggressive free-agency period.

Snead and the Rams qualify as somewhat lucky that Kupp isn’t pressing for a new contract (at least not publicly). It shouldn’t shift their sense of urgency to offer Kupp a revised contract extension that pays him appropriately, but it certainly reduces the pressure while keeping all parties on good terms (for now). Snead and owner Stan Kroenke typically do business in a fashion that keeps their superstars happy, and Kupp has displayed that understanding publicly.

“No,” Kupp responded when asked if he was searching for a new contract that would reset the receiver market. “I’m not trying to compare myself [to other receiver contracts]. I want this to be something we [the Rams] can work on together. Something that’s great for them, and great for my family as well. That place exists, it’s just about getting there,” Kupp concluded.

Kupp’s team-first attitude could make the Rams even more inclined to take care of their selfless star. If Kupp wanted to compare himself, he and his representation could put forth a logical argument to make him the highest-paid receiver in the league.

Kupp broke out of his shell in 2021 while showcasing immediate chemistry with new starting quarterback Matthew Stafford, who by the way, already received his own contract extension worth $160 million. Kupp led the NFL in receptions (145), receiving yards (1,947), and touchdowns (16) en route to earning the league’s first triple-crown since the legendary Steve Smith Sr. achieved the same in 2005 (although it’s worth noting Smith tied Larry Fitzgerald in receptions and tied Marvin Harrison in touchdowns that season). Kupp was named NFL Offensive Player of the Year for his efforts.

Kupp continued his heroic efforts throughout the Rams’ journey to being crowned Super Bowl LVI champions. In four playoff victories, Kupp recorded 33 receptions for 478 receiving yards and six touchdowns. Kupp arguably saved the best for last, totaling 92 receiving yards and two touchdowns in Los Angeles’ Super Bowl victory over the Cincinnati Bengals. Kupp’s second score served as the crucial game-winning touchdown and he was appropriately named Super Bowl MVP. Prior to that contest, Kupp had a 142-yard, two-touchdown performance in a win over the San Francisco 49ers in the NFC Championship game.

Figuring out what a new contract for Kupp looks like doesn’t qualify as overly difficult. Following a trade that sent him from the Kansas City Chiefs to the Miami Dolphins, Tyreek Hill became the highest-paid receiver on an annual basis earlier this offseason when he signed a four-year contract worth $30 million per year ($120 million total). Stefon Diggs and Davante Adams received $70 and $66 million in guarantees via new contracts respectively. Kupp could eventually become the league’s second $30 million-a-year receiver while topping $70 million in guarantees.

Regardless of when it happens, a massive payday will shortly arrive for Kupp. If his production continues to be anything like it was in 2021, he’ll be worth every penny.