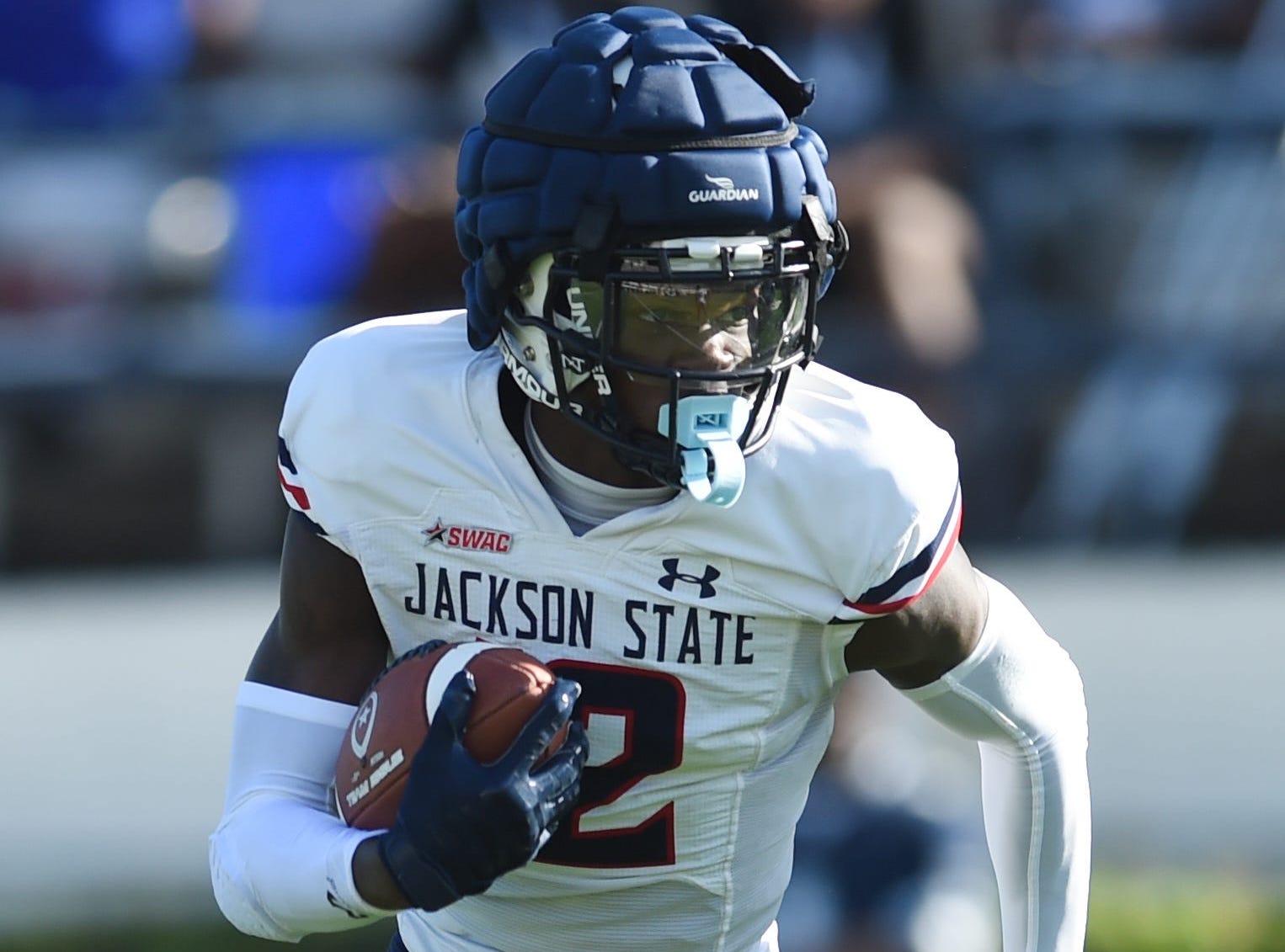 College Football: Top 25 Freshmen That Will Make An Impact

From the SEC to the Big Ten, ACC, and all the conferences in between, the list of impactful true freshmen in college football this fall is a long index of athletes just now finding their way around their respective college campuses. From five-star studs to some of the more unknown players in the nation, here are 25 freshmen to watch that should have their fingerprints all over the overall success of their college football programs this season.

One of the most athletically gifted players in the nation, the No. 1 overall recruit in the 2022 prep class was overwhelmingly dominant in the Tigers’ spring game and has all the makings of a potential top 10 pick in the 2025 draft. He’ll play on both sides of the ball for Deion Sanders this year and should post gaudy numbers week in and week out. He has zero limitations and a performance ceiling as lofty as any college football player in the country.

At 6-foot-6 and 220 pounds, Moss looks the part. He has tons of room to grow both on the field and in the weight room, but after recording three sacks in the Hurricanes’ spring game, he’s asserted himself as a situational pass rusher for Miami this season. A twitchy pocket pusher who also has experience in space, it won’t take long for Moss to receive an uptick in snaps.

The Tar Heels have pumped out running backs the last few years, and in due time, Pettaway could be next up. A four-star talent with the top-end speed to break open a game, he’ll serve as British Brooks’ primary backup for now, but is an exciting talent with the wiggle and shake to draw substantial carries this season.

Holy freak. The No. 2 overall recruit in the class, humans should not move the way Nolen does at 6-foot-4 and 325 pounds. There isn’t a box he doesn’t check along the interior and he will soon become one of the most dominant defensive tackles in college football. He can wreck games single-handedly and will make everyone better within a much improved Aggies roster.

With Jaivon Heiligh and Isaiah Likely off to the NFL, the Chanticleers are in need of immediate pop on the boundary for quarterback Grayson McCall. While the longtime quarterback will draw attention as a potential draft pick next April, Coleman could be thrust into the fire as a top-three target from their opening game against Army.

Maryland’s offense will draw headlines this fall with Dontay Demus and Rakim Jarrett forming one of the country’s top pass-catching duos, but Barham is a piece of the future within Head Coach Mike Locksley’s defense and should start from Day 1. A four-star talent by way of nearby District Heights, MD, Barham can play both inside and outside linebacker, and should make an impact right away.

A freak athlete that ran the triple option as a high school quarterback, Starks will fit in nicely amongst the alphas within the Bulldogs’ defense. With Lewis Cine now in the NFL, Kirby Smart’s group needs players at the safety spot, and Starks could earn some reps rotationally from Week 1. His elite athleticism carried him at the prep level, but to succeed in the SEC, he’ll need to refine his technical prowess in coverage and as a tackler in open space against bigger, faster ball carriers. However, don’t get confused, Starks is a flat-out stud with all the potential in the world to become one of the nation’s elite defenders in the seasons to come.

A long, 6-foot-2 corner, if you squint hard enough, Hardaway eerily resembles Bearcats first-rounder Sauce Gardner during his first few months on campus a few years back. With he, Coby Bryant, and Bryan Cook all off to the NFL, Head Coach Luke Fickell must insert fresh bodies into his secondary, and Hardaway is the easy choice. A four-star recruit, Hardaway makes his presence known in press-man and isn’t afraid to stick his face in the mud near the line of scrimmage in the ground game. It’ll be hard to keep him off the field.

The next man up in Tuscaloosa, Law’s tape was extremely impressive. A twitchy wideout with the necessary body armor that will allow him to work over the middle of the field, with Jameson Williams and John Metchie III off to the NFL, Law should compete for targets from Bryce Young early this season.

A devastating blocker whose movement skills and heavy hands present a combo rare to the college game at such a young age, Banks can play both tackle and guard spots, and could very well play center in a pinch. He understands the leverage game, has overpowering, herculean strength, and the fundamental footwork that showcases a player NFL scouts have already become familiar with.

At 6-foot-3, Johnson looks the part right away. Then you watch him work on the outside and his skill set shines. One of the most fluid corners in the class, don’t be surprised if Johnson quickly makes his way up the depth chart and proves to be one of the Wolverines’ top two corners this season.

Working behind potential first-round pick Gervon Dexter should help McClellan immensely in his first season on campus. He was a standout during spring ball and should carry that success into Billy Napier’s first year in Gainesville. At 6-foot-3 and 295 pounds, McClellan has the ability to play up and down the defensive line, which should serve him well within Patrick Toney and Sean Spencer’s defensive scheme.

With blazing speed (10.5 in the 100M) Stewart provides a unique perimeter skill set to the Aggie offense. One of the top wide receiver recruits in the country, Stewart is excellent in the short to intermediate areas of the offense and possesses the YAC ability to take it the distance on every touch. He and senior Ainias Smith will progress into the top two targets for A&M.

A standout at St. John’s College High in the heart of  Washington D.C, Smith was a bit of a steal for the Mustangs in the 2022 class. While the DMV area is often swamped with Big Ten and ACC scouts, SMU maneuvered their way through the fire and secured Smith, an extremely athletic defender who fits the bill as a modern-day three-down edge threat. Like Moss at Miami, he’ll begin his career as a designated pass rusher, but it won’t be long until his workload ramps up.

Under the tutelage of newly minted head coach Brett Venables, Kanak should THRIVE. A versatile, modern-day linebacker that has been clocked in the low 4.4s in the 40, Kanak will fly sideline to sideline for the Sooners for the foreseeable future. He’s fluid in coverage, works well in diagnosing plays near the LOS, and is excellent when asked to blitz. He’s one of my favorite players in the freshman college football class.

McGowan can flat out FLY. The Commodores have had little to hurrah about over the last few years, but with his speed, he’ll give even the elite of SEC defenses headaches and will holster a ton of targets in his first season.

Penn State has pumped out its fair share of ball carriers over the years and I wouldn’t be surprised if the 6-foot Singleton outplays Keyvone Lee as the bellcow this fall for James Franklin’s Nittany Lions. His game is extremely refined for a teenager, and if all comes to fruition, he could be a high-round draft pick down the road. With elite top-end track speed and the necessary agility to make defenders miss in open space, he’s a threat to take it the distance on every touch and should progress into a true three-down back after working in a run-heavy scheme in high school.

Jordan Davis, Devonte Wyatt, and Travon Walker are all gone, but the Bulldogs’ trench pipeline continues to prove fruitful with the arrival of Williams, a fearless edge rusher who showed the ability to win up and down the defensive line. Whether he’s aligned as a three-tech with his hand in the dirt, standing up outside the tackle, or lined up as a second-level blitzer, Williams will wear a ton of hats in Athens and immediately earn snaps in his freshman campaign. He’s arguably unblockable in one-on-one situations due to his combination of speed, power, and length. It won’t take long for Williams to assert himself in an always-loaded SEC.

LSU has options at the linebacker spot, but Perkins is too good of a football player to keep on the sidelines. After losing Damone Clark to the NFL, it won’t take long for Perkins to establish himself as the next heartbeat of Brian Kelly’s defense. With 4.4 40 speed, pass rush prowess, and the ability to deliver the big hit, he has every trait you desire in a second-level stalwart—even though he will need to add mass as his college football career progresses.

At 6-foot and 200 pounds, Burden touts an NFL-ready frame and a skill set that backs up what was a “culture-changing” addition to the Tigers’ program as a five-star recruit. While Burden’s basketball background allows him to dominate in the air, what makes him so unique is his ability after the catch when a gang of tacklers is needed to take him down in space. He turns into an elite running back with the ball in his hands and also possesses the ability to align on the outside or in the slot. He’ll be the go-to wideout for Missouri this year.

The first four-star recruit and highest-rated prospect to ever sign with the Cowboys, Woods could be one of the most talented players on the Wyoming roster right now. The No. 7-ranked interior offensive lineman in the 2022 prep class, Woods can align at all five spots along the offensive line and is a player that wins via his strength and fluid footwork when climbing to the second level. Positional versatility is a must-have in today’s game, and Woods should see playing time extremely early.

After losing Andrew Booth Jr. and Mario Goodrich to the NFL, the addition of Pride and Jaedyn Lukas provides immediate depth—at a minimum—after a disappointing 2021 season (despite amassing 10 wins) for Dabo Swinney. The College Football Playoff remains the standard for Clemson, and with a talent like Pride in the building, they are on their way back. After an impressive spring in which Pride asserted himself as one of the top corners on the roster, his fluidity and mirroring skills are second to none among all freshman secondary defenders, and it should allow him to challenge starters Sheridan Jones and Nate Wiggins for snaps right away.

Williams was dominant during spring ball for the Horned Frogs and has earned his spot in the rotation this season. A massive man that carries his 325-pound frame extremely well, his power could be overwhelming at times for offensive linemen and he will be a gap clogger within the interior for years to come. As he continues to get stronger, Williams will only get better with the more snaps he receives throughout his college football career.

After placing three Roadrunners in the NFL this spring in corner Tariq Woolen, offensive lineman Spencer Burford, and running back Sincere McCormick, the highest-ever rated recruit in program history will provide a breath of fresh air within the lungs of Jeff Traylor’s defense. Despite offers from Power Five programs Arizona, Washington State, and Boston College, Pewee opted to stay close to home and will become an immediate impact player at linebacker this fall.

The signing of Travis Hunter drew headlines—and rightly so—but Coleman will earn snaps right away on the outside for the Tigers’ offense and quarterback Shedeur Sanders. A four-star talent, Coleman returned a kick for a touchdown at Jackson State’s spring game, offering a glimpse of the game-breaking talent he will showcase this fall.