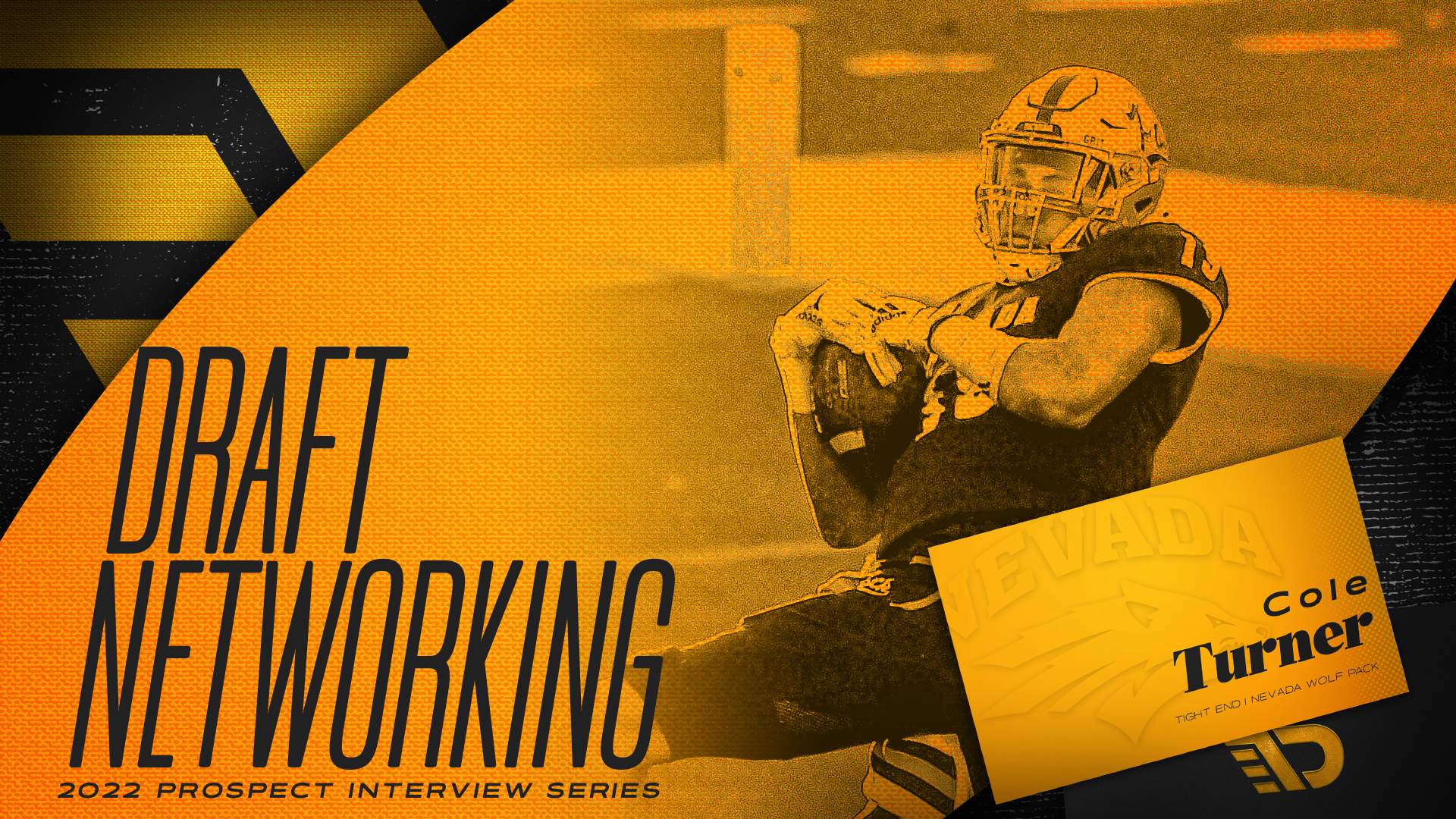 NFL franchises place an emphasis on acquiring versatile tight ends that can create mismatches in the passing game. A big, tall, and long athletic pass-catcher that has served as a big-time weapon in the red zone, Nevada’s Cole Turner possesses a rare and intriguing skill set that will be in high demand in April.

Turner recently spoke exclusively with The Draft Network about his combine experience and takeaways, his incredible nose for the end zone, which teams have shown interest in his services throughout the process, his favorite route to run, and how he creates separation, and so much more.

JM: You’ve been extremely productive as a pass-catcher. You depart Nevada after compiling more than 1,300 yards in the passing game. How do you look back on the role you played in Nevada’s offense?

CT: I played a role that allowed them to move me around a lot to try to create mismatches. I played all of the possible tight end positions for us on the field. I made plays wherever they asked me to line up. I was blessed to have a great quarterback at my disposal as well. I had a lot of opportunities.

JM: You scored 10 touchdowns in 2021, which led the Mountain West among all tight ends and was good enough for second overall in the entire nation. That’s 19 touchdowns over your past two seasons. What is it about your game that allows you to find the end zone with such ease?

CT: I’m a big target first and foremost. The red area is definitely where I make a lot of my money, that’s for sure. I’ve been able to pride myself on my ability to score touchdowns. My coaches recognized that ability and they put me in great positions by giving me a ton of opportunities in the red zone. They knew that I was extremely capable in that area. I’m a mismatch when things get tighter. It’s easier to throw the ball to a big, athletic guy that possesses a large catch radius.  It’s definitely an area of my game that shines.

JM: You recently attended the NFL Scouting Combine. The measurements were excellent. You clocked in at 6-foot-6 and you also recorded an excellent 120-inch broad jump. What was your overall experience like, and what were your main takeaways?

CT: It was an awesome experience. It was a once-in-a-lifetime opportunity and I was extremely blessed to receive an invite. I’m happy with my performance and I believe I put myself in a good position going forward.

JM: You certainly did. Who are some of those teams that you met with formally, and do you have any virtual meetings coming up? It’s that time of year.

CT: I formally met with the Arizona Cardinals at the combine. That was great. I’ve had some Zoom meetings with the Buffalo Bills, New York Giants, and Denver Broncos. We have some more interviews coming up on my schedule. I’m so excited about this process and I’m blessed to be speaking with NFL teams.

JM: There’s a lot of interest in you and it’s easy to see why. You’re a savvy route runner. Do you have a favorite route to run?

CT: I definitely enjoy running some type of over route. Anything that allows me to read coverage and get open from there is my personal preference. I love running an over route with an option to take the middle if that opportunity presents itself. That’s definitely my favorite route to run.

CT: I love that the position gives us an opportunity to do everything. There’s no other position on the field that takes a little something from every other spot. We can run routes and catch passes like wide receivers and running backs, and we can also block like offensive linemen. We even line up in the backfield. It’s a position that’s extremely diverse and it presents so many fun challenges. You have to be able to do everything in order to be a successful tight end.

JM: One of those roles includes playing as an in-line blocker in the running game. How do you feel about that aspect of the game?

CT: I feel like I’m a solid player at that position. I feel like I proved that at the Senior Bowl where I received more opportunities at that position. I just didn’t do it a lot at Nevada because my coaches rarely asked me to play that role. I was asked to make a bigger impact in the passing game. I do feel like it’s a part of my game, though. It can eventually become a strong suit of mine after some repetition. I’m excited to get more experience there. It’s definitely something I can do.

JM: I love that. You’ve been preparing for this process with the excellent team over at Sanford Power. How has the pre-draft training process been treating you?

CT: Sanford Power has done an awesome job setting me up while tailoring the workouts to whatever pre-draft event comes next. We prepared for the Senior Bowl before then, and then we moved onto the combine and now we’re getting ready for the Pro Day. I’m really happy that I got a chance to work with them. Getting to know them has been an amazing experience. They’ve played a huge role in my journey. I’m thankful for the team over there.

JM: They have a great team. Some people still view Nevada as a small school, and they’ll call you a “small school prospect.” There’s a lot of disrespect for the Mountain West. How do you typically respond to that?

CT: People can say whatever they want about the Mountain West but if you look at the numbers and how we fared when we played against Power 5 teams, we’re the best and most successful Group of Five conference in the nation. Every team in the Mountain West from top to bottom can compete against any program in the country.

People are always going to have their opinions, and it’s not my job to change their minds or opinions. Everyone has something to say but I’m extremely proud that I played in that conference, and I’m even more proud to say that I represented Nevada. It was a life-changing experience. The coaches did everything within their power to prepare me for the next level. I received a ton of opportunities at Nevada. I wouldn’t change a thing about where I went to school.

JM: That’s the best way to answer that question. If you could catch a pass from any quarterback in the NFL, who would you choose and why?

CT: I’d have to pick Tom Brady now that he’s back (laughs). He’s definitely the GOAT, man. I grew up watching him play football. He was playing before I was even born (laughs). To be able to catch a touchdown from a guy that’s played in 10 Super Bowls and won seven of them would definitely be a dream come true.

JM: I’ve really appreciated your time today. What kind of impact is Cole Turner going to make at the next level?

CT: I’m going to be a guy that brings a ton to the table and makes an instant impact. I’m hoping to develop into one of the premier players at the tight end position across the entire league someday. I’m excited to learn from my coaches and teammates, and I’ve really appreciated your time today.