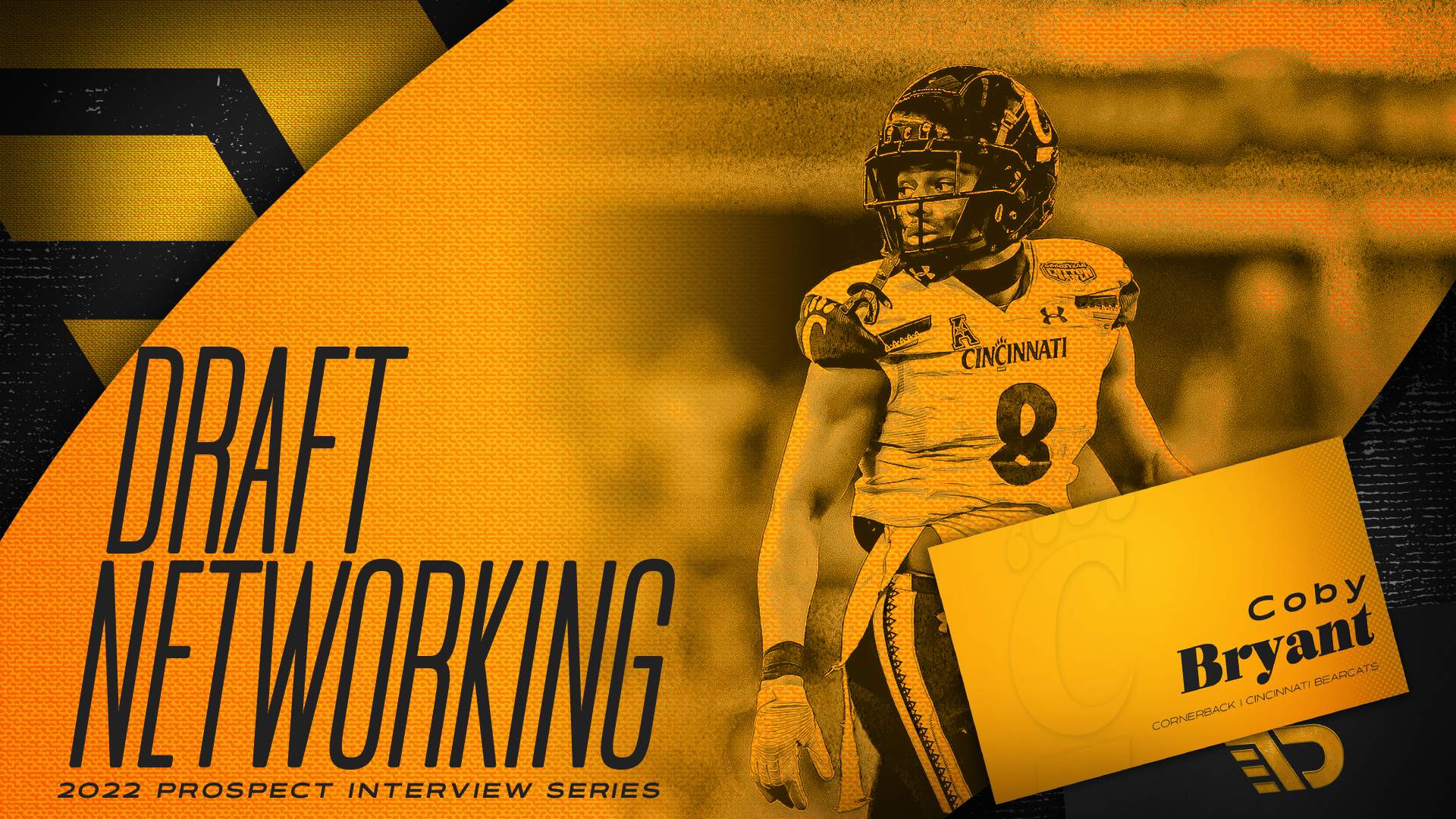 Don’t sleep on Cincinnati’s Coby Bryant. The reigning Jim Thorpe Award winner (awarded to the best defensive back in college football) is an extremely versatile and pro-ready cornerback prospect that helped lead Cincinnati’s defense to glory all throughout the 2021 college football campaign.

Known by his teammates for the “Mamba Mentality” he brings to the field in honor of his legendary namesake, Bryant quickly became a ball magnet in Cincinnati’s feared defensive backfield to the point where opposing quarterbacks looked to avoid throwing the football in his direction altogether.

Bryant recently spoke exclusively with The Draft Network regarding his impressive career as a Bearcat, why he was able to handle duties in both man and zone coverage at such a high level, what he learned about himself at the Senior Bowl, talking trash with Desmond Ridder in practice, developing an unbreakable bond with Ahmad Gardner, and so much more.

JM: You’ve been a pleasure to watch over the past few seasons while showcasing your talents for an extremely talented Bearcats defense. What’s one thing you’ll forever remember from your time at Cincinnati?

CB: I’m definitely going to forever remember the brotherhood we cultivated and created. Throughout my five years at Cincinnati, I became extremely close friends with several of my teammates. Those relationships extend well beyond the football field. We’re close friends as fellow men first and foremost. We grew closer together with each passing season. We’re going to continue to be friends and have conversations, regardless of whether or not we end up on the same NFL teams. That’s something I’ll never forget.

That’s honestly the purpose of football. Of course we’re here to compete and win, but we’re also here to create unbreakable bonds and brotherhoods.

JM: That’s so true. I’m so excited to discuss X’s and O’s with you because you’re clearly such an intelligent player. Talk to me about the scheme Cincinnati ran on defense. I’m looking for what they asked of you, and how you feel playing in that system helped prepare you for the NFL.

CB: I definitely feel like coach Luke Fickell and my cornerbacks coaches challenged me throughout my five years at Cincinnati. It wasn’t about just lining up and playing man coverage. We didn’t approach any rep with the mentality to simply guard your man. We had to understand the defense and understand where our help was at. They taught us the little fundamental things.

That was the biggest challenge and jump I had to make as a first-year player within our defense. I learned more and more with each passing season and I became a more complete player in my final season. Those little fundamentals helped me progress into the defender I became in 2021. I constantly got better. I was asked to line up, understand the defense, and be a leader for our team. I did my job and tried to help my teammates do their job as well.

JM: It really pops on tape. You had a chance to go through a bit of a different experience when you traveled to Mobile, Alabama for this year’s Senior Bowl. I’m curious what you feel you learned most about your game following the annual all-star event?

CB: It really just further proved and reinforced my belief that I can compete against any receiver in the nation. I’m on that same level of talent and I’m always ready to compete. It was another terrific resource and learning experience for me. I received coaching from an NFL staff and it gave me a chance to apply those learnings and experiences to the field. That was the biggest thing I learned about myself at the Senior Bowl really. The game is going to be a lot faster at the next level and I know the staff will expect more out of you. It was a great experience in Mobile.

JM: When I turn the tape on, I see a player that thrived in both man and zone coverage. And Cincinnati mixed it up in the secondary. They asked you to play both on a fairly consistent basis. How did you develop that ability to thrive in both? You don’t see many corners that can handle both at the collegiate level as flawlessly as you did.

CB: That just really showcases my versatility. If I have to, I can play nickel, outside corner, or even as a safety. Whatever it may be, I’m a versatile back-end defender. I actually just understand the game of football at an extremely high level. I’m proud of my football I.Q.

JM: As a follow-up, what would you say are the biggest adjustments in your game you make when you’re in man versus zone? I’m looking for a type of technique, and do you prefer one or the other?

CB: There’s definitely a big difference. When you’re in zone coverage, you have to key in on multiple receiving threats as well. When you’re in man, that’s obviously your man lined up across from you. There’s a change of technique involved at the line of scrimmage. It allows me to get my hands on that man and be patient. I try to rely on being patient and eventually getting my hands on the receiver.

I’m always trying to make a play on the ball. In zone coverage, you’re pretty much keying in on the multiple threats that you’re responsible for. You’re paying close attention to the quarterback in zone as well, as you hope to break on the ball and make a play for your defense.

JM: Speaking of ball skills, they’re so important at the next level. You enter the NFL with an impressive 35 career break-ups and nine interceptions under your belt. What is it about your game that allows you to disrupt the catch point at such a high level?

CB: Honestly, I like to give credit and take it back to my baseball playing days. I played some centerfield, first base, and I also pitched a little. I grew up playing baseball my entire life. That’s what made catching the football an easier process for me.

A baseball is obviously a lot smaller than a football. It taught me how to track the ball in the air. Once that ball’s in the air, I’m calling it mine. It’s either mine or nobody’s. That’s the mentality I try to keep with me when the ball’s in the air because I know that ball production is so big at the next level. If you can make that many plays on the ball in the NFL, you can become a truly special player.

JM: Tell me about the chemistry you developed with Ahmad “Sauce” Gardner and how you pushed each other to become better players.

CB: That’s my little brother. Honestly, he pushed me from the very first time he arrived on campus. He was making plays from his very first collegiate snap. He’s just special that way. In all honesty, he had a way better year than I did that season. It is what it is. I was extremely happy for him because we now had somebody else in the room that could push me.

It wasn’t like I had to push him all the time. We pushed each other. That’s what made us better. We immediately built a relationship with one another. We gravitate towards one another because we’re so much alike. We’re both competitive, funny guys (laughs). It goes back to the first question you asked me. It’s things like that I’ll never forget. He challenged me to become not just a better football player, but a better man off the field as well.

JM: You talked about him pushing you. You came back this past season and won the Jim Thorpe Award. It’s funny how that works out. Which teams have you met with throughout the process, either virtually or through Top 30 in-person visits, and do you have any more coming up?

CB: I essentially met with every single team between the Senior Bowl and NFL Scouting Combine. I had some Top 30 visits as well, but we’re keeping those details under wraps at this time. I’ve been meeting with pretty much every team in one way or another. I’m really enjoying the process.

JM: You’ve had so many incredible teammates, but I’m going to put you on the spot. If you were going to war tomorrow and could only bring one teammate with you, who would you bring and why?

CB: I can’t answer that question (laughs). I’m honestly bringing everybody with me. I can’t pick just one. I would bring them all. I think it shows within my play on tape. It goes back to what I said about the relationships we had. Our defense, offense, you name it. Desmond Ridder and I are extremely close as well even though he plays quarterback. It’s all about the brotherhood we had.

We’re all very close both on and off the field. We hung out with each other, played games with each other. It’s the little things that allow you to build chemistry on the field. That’s why we had such a great season last year.

JM: Desmond Ridder was OK with you getting him in practice?

CB: Absolutely he was (laughs). You know, he’s quite the competitor as well. He pushed me and he would talk a little trash while doing it (laughs). I had to come back and pick him off a few times. I might flick the ball at him after doing it, too (laughs). We loved messing with one another.

JM: I love that (laughs). I’ve really appreciated your time today. This conversation has highlighted why you’re one of the best cornerbacks available in the 2022 NFL Draft. What kind of impact is Coby Bryant going to make at the next level?

CB: I’m going to make a huge impact. First and foremost, I’m going to be that leader for our team, for our defense. It doesn’t matter if I’m a rookie or not. I feel like my teammates will gravitate toward me because I’m an alpha male. I carry myself the right way both on and off the field. I’ve always felt like people gravitate towards that.

On the field, they’re going to get a guy that’s going to go 100% on every single play. I’m going to continue making plays on the ball. I’m gonna be a great tackler. I feel like I’ve set myself apart from a lot of cornerbacks in the draft because of my high football IQ. I have a special amount of passion for the game. It speaks for itself on the field. They’re going to get a great football player at the end of the day.