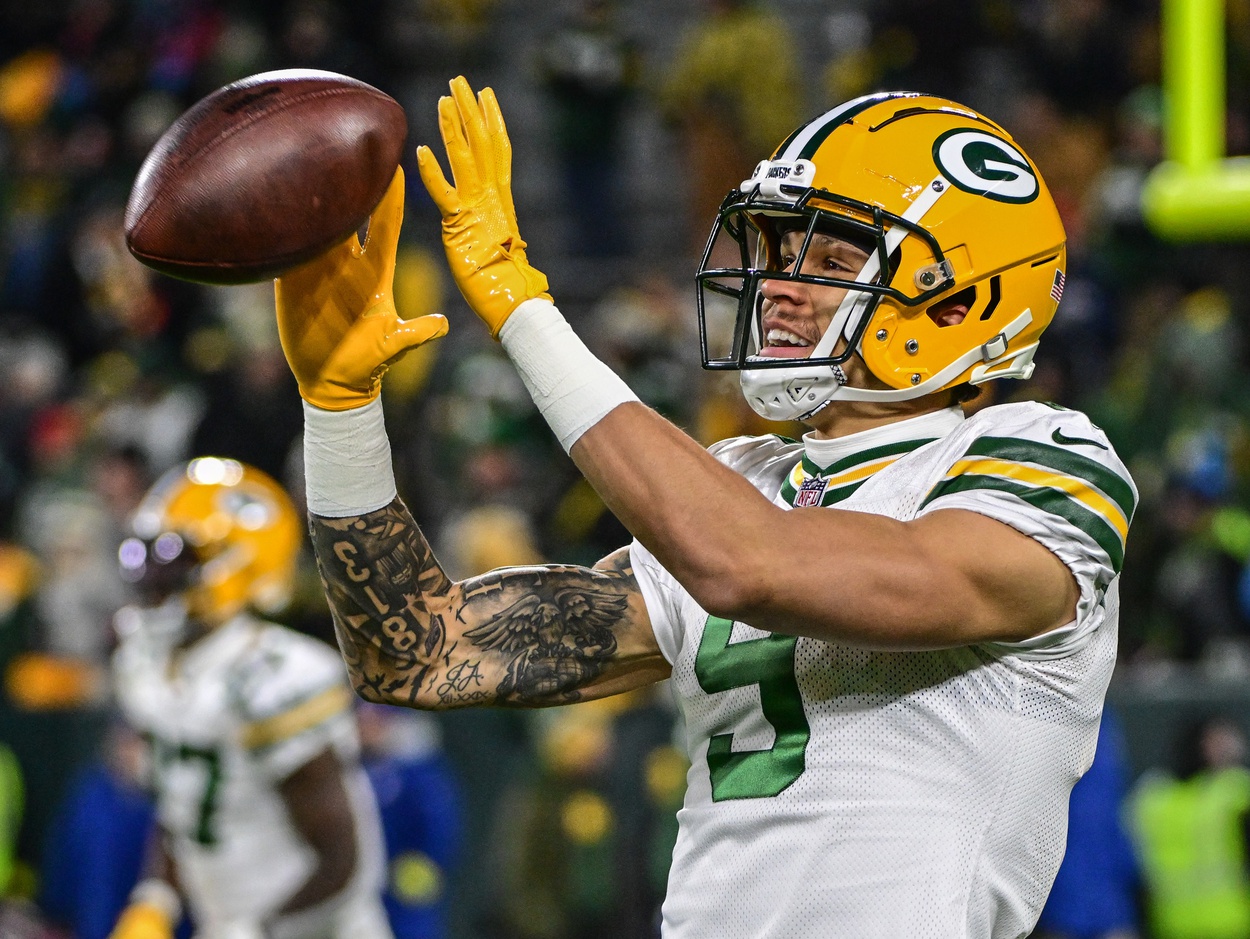 Christian Watson’s Breakout Is For Real

Green Bay Packers rookie wide receiver Christian Watson was excellent throughout the Packers’ 27-17 defeat to the Tennessee Titans on Thursday Night Football. Watson hauled in four of six targets for 48 receiving yards and two touchdowns. It was an appropriate follow-up to Watson’s coming out party against the Dallas Cowboys on Sunday. Thursday’s performance further legitimized Watson’s current form.

The No. 34 overall selection in the 2022 NFL Draft, Watson’s first of two touchdowns occurred as the opening quarter reached its expiry. Packers quarterback Aaron Rodgers hurried to the line of scrimmage and snapped the ball while the Titans were attempting to substitute. Rodgers caught the Titans with 12 defenders on the field and earned a free play. He lobbed a ball into the end zone for Watson, who leaped over the top of Titans cornerback Kristian Fulton and beautifully high-pointed the football in tight coverage.

Watson wasn’t done there. Watson’s second touchdown arrived via a crucial 2nd-and-goal late in the third quarter. The Titans were fooled on a play-action passing attempt that saw a Packers receiver come in motion post-snap. Rodgers found a wide-open Watson in the back of the end zone. Watson’s score reduced Tennessee’s lead to 20-17 following a two-point conversion.

Through his last two performances, Watson has recorded eight receptions for 155 yards and five touchdowns. The former North Dakota State product is averaging an explosive 19.3 receiving yards per catch throughout this two-game stretch. Watson now astoundingly leads all rookies wideouts in touchdowns—he had zero prior to Sunday’s overtime victory over the Cowboys.

It represents an amazing turnaround for a first-year receiver that began his career in a less-than-ideal fashion. A small schooler that required a little extra seasoning, Watson had recently struggled with drops, focus issues, and injuries. Chemistry alongside Rodgers had been notably lacking as Watson entered Week 10 with 10 catches in six appearances combined. His turn in form is a stark reminder that patience is always required when dealing with rookies that are acclimating to the professional ranks. The lightbulb has officially come on for Watson.

Watson now finds himself tied atop the leaderboard with five touchdowns apiece alongside Allen Lazard among all eligible Packers pass-catchers. His ascension has captured the attention of Rodgers, who’s rightfully beginning to pepper him with targets on a weekly basis. Watson appears locked in as Rodgers’ go-to target moving forward.

Watson’s improved numbers now stand at 18 receptions for 243 receiving yards and the aforementioned five touchdowns. He’s averaging a chain-moving 13.5 yards per reception. A physically imposing athlete both pre-and-post catch, Watson is averaging 5.7 yards after the catch per reception, per Pro Football Focus. Rodgers is enjoying an elite passer rating of 131.4 when targeting Watson in coverage. A dual-threat weapon, Watson also added a rushing touchdown to his offensive totals.

Thursday’s defeat delivered a significant blow to the Packers’ postseason aspirations, but they remain in the wild card hunt in a lackluster NFC conference. Watson’s new-found form makes the Packers a dangerous offense down the stretch. Christian Watson is crucial to the Packers’ late-season success.