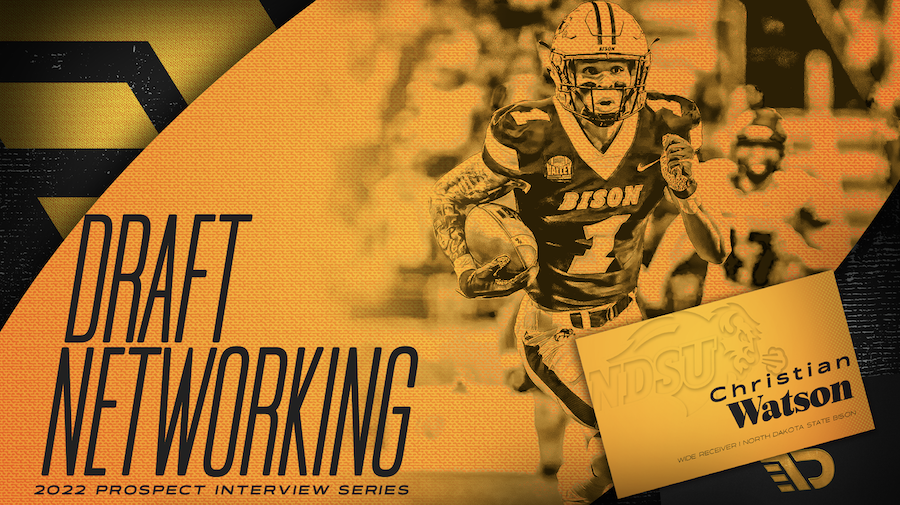 North Dakota State’s Christian Watson has enjoyed as successful of a pre-draft campaign as any prospect in the 2022 NFL Draft. The 6-foot-4, 208-pound Watson went to the Senior Bowl in January and proved he can compete against cornerbacks from the best programs in the nation. Watson then aced the NFL Scouting Combine by putting up some of the best numbers and results we’ve ever witnessed at the receiver position.

Watson recently spoke exclusively with The Draft Network about his combine experience and performance, how he uses his size to his advantage, his favorite routes to run, his diverse release package, how he approaches cornerbacks differently in coverage, and so much more.

JM: I’m not sure that any prospect has attached a jetpack to their pre-draft stock in the manner that you have. How’s the process treating you so far? Are you soaking it all up?

CW: It’s definitely been a great process for me. I’m extremely blessed and thankful for the opportunities I’ve been given. You said it perfectly. I’ve just been attacking every single opportunity I’ve been awarded with. I’m soaking this up and having some fun along the way. A lot of the hard work is paying off and that makes me extremely happy and excited.

JM: It started at the Senior Bowl for you. That was a big week that allowed you to compete against cornerback prospects from bigger programs than you typically saw on a weekly basis. How do you feel you handled that initial pre-draft test?

CW: I brought a positive mindset into that week. I understood what I was capable of. I knew I was capable of competing against the best and showcasing myself in a positive manner while doing it. I wanted to stand out against some of the best cornerbacks in attendance. At this point in the process, I’d like to consider myself as one of the best receivers in this draft class. It was another opportunity for me to go out there and compete against the best of the best. I wanted to prove that I’m not just a small school guy that put up big numbers because he played at a small school. I wanted to prove I’m a good receiver because I’m a good receiver that can play at any level.

JM: You certainly did that. You then went to the combine and I mean, wow. You ran the 40-yard dash in 4.36 seconds, jumped a 38.5-inch vertical and a 136-inch broad jump. Do you feel like you surprised some people in Indianapolis?

JM: The results, when paired with your size and downfield speed, have led to some lofty comparisons. Calvin Johnson’s name has been thrown out there. What goes through your mind when you hear something like that?

CW: To be compared to someone like that, even just from an athletic standpoint, is truly special. It’s an honor to be compared to an all-time great. He’s one of the greatest receivers to ever play the game. He’s definitely someone that I look up to. It’s an honor. I’m thankful to be mentioned in the same breath as a receiver of that nature. It’s really cool. I hope I can one day live up to that comparison.

JM: What was the strangest question a team asked you at the combine?

CW: I surprisingly didn’t get anything out of the ordinary. I’ve been asked that question a lot and I wish I had a better answer to give you (laughs). My combine experience and interviews were rather straightforward. There wasn’t anything that caught me off guard. I didn’t get any weird questions. Nobody wanted to ask me that. I was expecting to get something weird because I’ve heard the stories (laughs). It just never arrived for me.

JM: That’s good news for you. What are some of the ways that you can use your size and speed to your advantage?

CW: I use those abilities to create more value within myself as a receiver. It allows me to be a versatile weapon within the structure of our offense. I use my size and speed to create mismatches in coverage. I can play in the slot and be a slot receiver, even at my size. I can create separation there, both inside and outside. It applies to all aspects of playing the receiver position. I also played a ton of reps in the backfield for us at NDSU as well. My size, speed, and overall skill set made that possible. I try to utilize all of my strengths in a lot of different ways. It’s helped me do a lot of different things that other receivers aren’t necessarily doing. I use my versatility to create mismatches and separation so that I can make big plays for us.

JM: It really pops on tape. Do you approach bigger, more physical cornerbacks in coverage differently than you do smaller, shiftier ones?

CW: I do, but it comes down to studying tape at the end of the day. I study how that cornerback plays in coverage. It doesn’t always matter if he’s a big guy or small guy. You have some small guys that are more aggressive, and there are big guys that play more passively. That really comes down to player-specific tendencies.

If I was being general, you definitely have to approach guys differently, especially when you take my size into account. Smaller corners typically don’t want to be overly physical with me because they know I can outmuscle them and I’m going to win that battle every time. I’m able to overpower them. There’s definitely a different approach for different corners.

CW: I wouldn’t say that I do. I like catching balls and catching touchdowns at the end of the day (laughs). I like doing those things on whichever routes are asked of me.

JM: Tell me about some of the ways you create separation throughout a route then. I want to hear about your release package and any other movements you find effective.

CW: In terms of creating separation, it starts for me at the line of scrimmage. It starts right off the snap and it finishes at the catch point. For me, especially throughout this process, I’ve been expanding and working on my release package. It’s definitely something I’ve been focusing on for several years now. I try to utilize different releases off the line of scrimmage. I try to switch it up so I’m not tipping any tendencies and things of that nature.

I really like being quick and fast at the line. I also try to move the defensive back with a counter, jab-step, or by coming to balance. Winning at the line is so important for a receiver. Being physical throughout the route if need be is another way for me to win. I obviously use my speed as well. I finish it off by using physicality to win at the catch point.

JM: That’s terrific. For a bigger receiver, you do some great work after the catch. You’re elusive with the ball in your hands. How did you develop that aspect of your game?

CW: That’s something that just happened naturally for me. I’ve been playing football since I was four years old. I’ve always tried to make things happen with the ball in my hands. I’ve spent a long time playing this game and I’ve put a lot of time into working on my skill set. It comes with the territory. I’m blessed to possess some God-given talents as well. I’ve been playing the game for a long time. I’d like to say that’s helped me develop good football sense and the ability to make plays when I get the ball in my hands.

JM: You’ve absolutely aced this pre-draft process, but some people still refer to North Dakota State as a “small school”, and those people will call you a “small school prospect.” You touched on that a bit when we discussed the Senior Bowl, but I want to expand on it. How do you typically respond to that?

CW: I have to continue proving myself at the next level. That’s the best way for me to eliminate that discussion. I want to help pave the way for other guys such as myself. In the case of me specifically, I have to continue to be dominant regardless of what level I’m playing at. I plan to prove exactly that as my career continues to take off. We’ve seen small school receivers like Cooper Kupp dominate the league lately. I plan on doing the same.

A great football player is a great football player at the end of the day, regardless of where he played college football at. The league is going to find and identify talent no matter what. That’s been the case for me. All I need is one opportunity to prove myself. I plan on showcasing exactly who I am regardless of what school I come from. I don’t pay any attention to that. I don’t really acknowledge it. I’ll let my play do the talking.

JM: That’s the best way to handle that. Earlier you touched on playing in the slot. I want to expand on that. NFL offenses are using bigger players at the slot position nowadays. It’s a popular trend. You’ve played both in the slot and outside at NDSU. Can you see yourself playing in the slot at the next level?

CW: I definitely can. My main goal is to create value within myself at the end of the day. That’s really my motto. I plan to be as versatile as possible. I’m trying to play wherever I need to play in order to get on the field and make an impact. It doesn’t matter if it’s inside or outside. Heck, I’d be thankful to play in the backfield a little bit (laughs). I feel comfortable playing all of these positions. I hope that’s something I’m able to do going forward.

JM: I’ve really appreciated your time today. I feel like this conversation has highlighted why you’re one of the most exciting receivers in the 2022 NFL Draft. Why should a team use a top-50 selection on Christian Watson?

CW: When you draft Christian Watson, you’re getting a student of the game. I’m somebody that loves football at the end of the day. I’m a compassionate individual. I’m going to be a true dominant competitor. I’m going to put my best foot forward to ensure I make an immediate impact. I just want to help the team win games. I’m a dog in all aspects of the game at the end of the day.