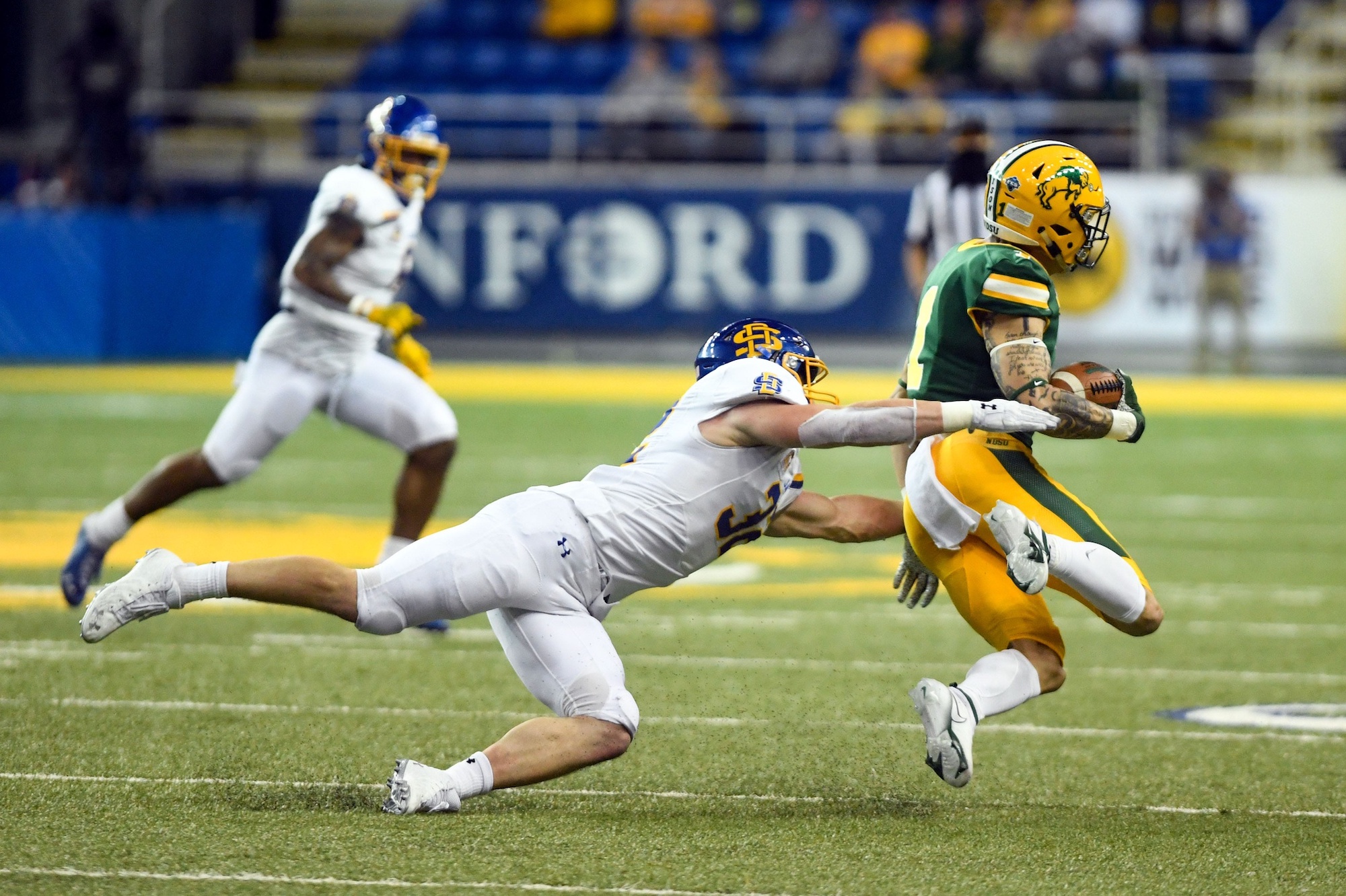 50/50 ball extraordinaire, ability to stack corners, big-bodied target, when I heard a comparison for North Dakota State’s Christian Watson was the great Randy Moss, I had to turn on the film and believe it with my own eyes. An imposing athlete that uses all of his chiseled 6-foot-5 frame to his advantage, Watson has become the newest headliner within a loaded pass-catching class. While I’ll hold off on comparing the Bison senior to one of the greatest wideouts to ever strap up, microscoping Watson as a potential high day-two pick requires much more of a spotlight shaded toward a prospect who touts all the traits to become a featured perimeter talent on Sundays. Looking to become the first NDSU pass-catcher selected since Stacy Robinson was taken in the second round in 1985, Watson is the next talent out of the flourishing pro-pipeline that is NDSU. From Carson Wentz in 2016 to Trey Lance and Dillon Radunz last spring, a Bison alum coming off the board before day two is over has become more of a regular occurrence. A program that failed to see more than just two players drafted prior to the conclusion of the third round since 1991 (before Wentz went No. 2 overall to Philadelphia), talent evaluators have flocked to the vast landscape of the Dakotas once again this fall to get a glimpse of a player that scouts have labeled as a potential ‘game-wrecker’ at the next level. With high-octane talent bursting at the seams from Power 5 programs across the country, even as a dominant FCS talent, it’s been difficult at times for Watson to maneuver his way out of the shadows cast by the FBS’ elite—and into the hearts of wideout-needy organizations in need of youth on the perimeter. However, as we move into Senior Bowl week, pro days, and the NFL Scouting Combine soon to follow, a prospect once hidden in the curtains of the glitz and glam of the FBS has begun to carve his own path as a prospect that could become the steal of the class if all comes to fruition. A unique blazer for his size, Watson is able to win a multitude of ways and was utilized as such within the Bison offense that averaged a tick over 35 points per game. Flexed out primarily as the X receiver in the high-flying NDSU offense, what makes Watson such an intriguing talent as a pro—especially with his athletic profile—is the number of ways he can provide an impact. A vertically imposing threat where all 22 eyes are drawn to him solely for his mold and makeup, Watson’s speed and ability to glide past secondary defenders is a trait unseen from many of today’s pros with a build similar to that of the redshirt senior. While teams looked to double and bracket him throughout his time in the college ranks, to avoid the onslaught of bodies, his positional versatility allowed him to slide inside to the slot, handle manufactured touches in the backfield, and, just for icing on top of the cake, slide back on special teams as a punt and kick returner, where Watson was named a ‘20 FCS First-Team All-American. https://twitter.com/NDSUfootball/status/1462169327541665792 Expected to run in the low 4.40s in his 40-yard dash, Watson is as smooth an athlete as they come with long, outstretched strides that eat up grass with ease. A prospect with an excellent catch radius, body control, and aforementioned versatility to boot, an impressive showing at the Senior Bowl and throughout the pre-draft circuit could see teams pounding the table for Watson come the middle rounds of April’s draft.