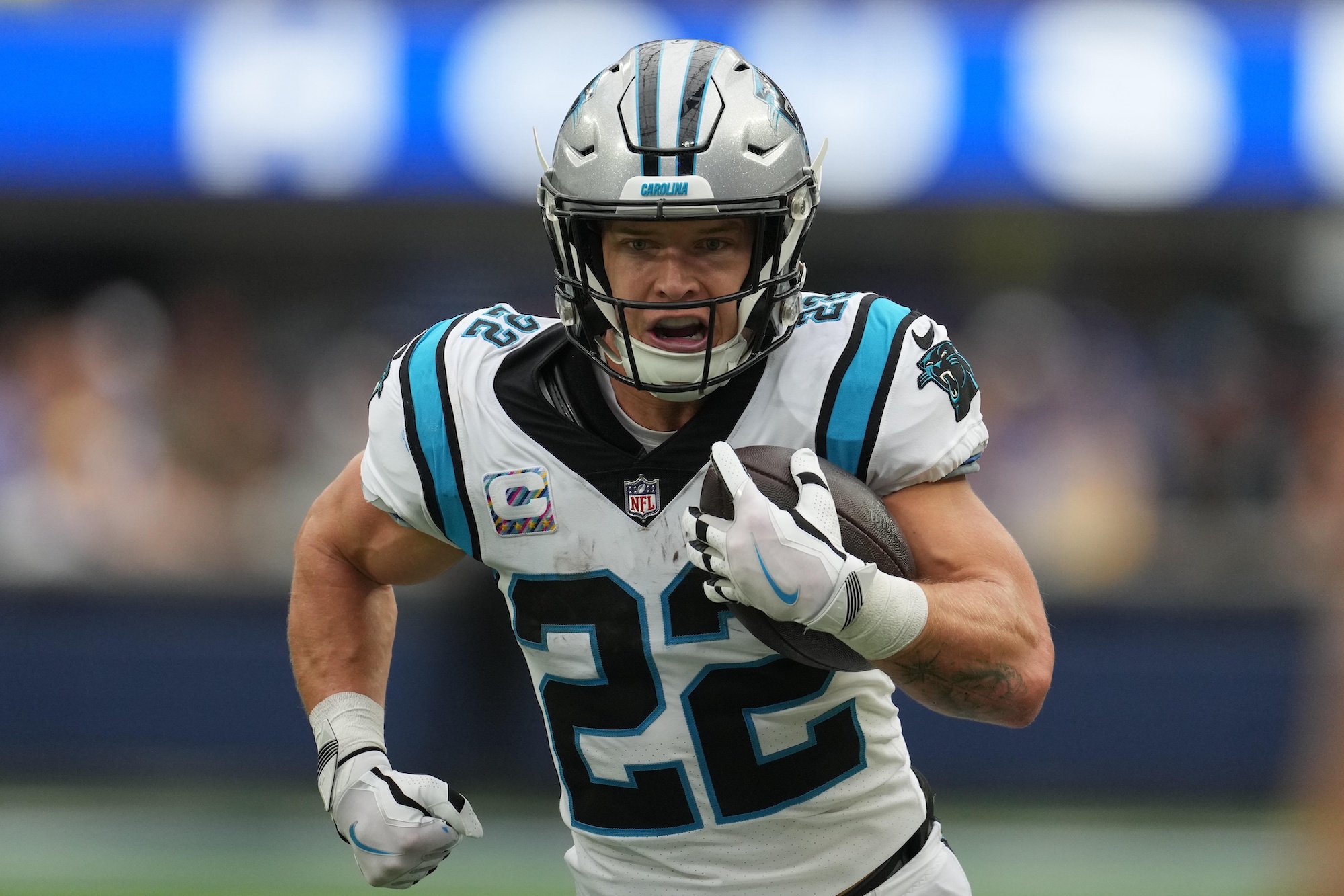 The San Francisco 49ers have acquired superstar running back Christian McCaffrey from the Carolina Panthers in exchange for second-, third-, and fourth-round selections in the 2023 NFL Draft, and a fifth-round selection in the 2024 NFL Draft, according to multiple reports. It represents the first blockbuster trade ahead of the Nov. 1 trade deadline.

The 49ers just increased their chances of achieving their lofty goals this season, but the Panthers ultimately won the trade.

McCaffrey’s name had routinely surfaced in trade discussions. Early indications were that Panthers general manager Scott Fitterer was demanding a first-round pick in exchange for McCaffrey’s services. Fitterer didn’t receive that, but he’s landed quite the haul of mid-round selections that will help his Panthers rebuild their struggling franchise. The Panthers currently own six picks in the top 120 of the 2023 draft. Fitterer’s Panthers have acquired six selections over the next three drafts when also factoring in the Robbie Anderson trade. Drafting a franchise quarterback of the future should be a priority.

The 1-5 Panthers, who recently kickstarted their head coaching search by firing Matt Rhule, possessed an obvious amount of interest in trading McCaffrey. A rebuilding franchise should always pounce on an opportunity to trade an expensive and injury-prone ball carrier. Looking through recent history, the Panthers acquired a historic haul of picks in exchange for a running back—the Trent Richardson trade doesn’t count, as we should wipe that one from our memory, like the Indianapolis Colts have.

The Panthers have willingly absorbed significant dead cap hits as a result of this McCaffrey blockbuster. Trading McCaffrey welcomes dead cap hits of $8,095,750 in 2022, and that figure balloons to $18,352,250 in 2023, via Spotrac. The total value sets a new record among all non-quarterbacks. It signals how desperately Fitterer and the Panthers desired future draft capital.

Meanwhile, the 49ers are hoping McCaffrey is the final offensive piece that gets them over the hump. McCaffrey now joins a talented skill position group that also includes receivers Deebo Samuel and Brandon Aiyuk and tight end George Kittle. It gives game-managing quarterback Jimmy Garoppolo quite the supporting cast to work with.

The 49ers are taking a sizable gamble on McCaffrey, who missed 23 of 33 games during the 2020 and 2021 campaigns. McCaffrey has been healthy and productive through 2022 thus far, having played 85% of Carolina’s offensive snaps. McCaffrey arrives in San Francisco with an eye-popping average of 111.6 yards from scrimmage per game. McCaffrey has forced 18 missed tackles this season and is averaging 3.44 yards after contact per attempt, via Pro Football Focus.

Acquiring McCaffrey for the remainder of the 2022 campaign is cost-effective. General manager John Lynch inherits a guaranteed salary of just $690,000 after the Panthers made a salary restructure of McCaffrey’s contract this past March. McCaffrey’s 2023 salary of $12 million contains a $1 million injury guarantee. There is no guaranteed money remaining on McCaffrey’s contract for the 2024 and 2025 seasons, where he’s set to earn $12 and $12.2 million, respectively.

McCaffrey will immediately step into the starting running back role that was vacated by the injured Elijah Michell, who may feel hard done by this deal. Jeff Wilson Jr. had been doing an admirable job filling in for Mitchell. Wilson Jr. is averaging 4.9 yards per carry on the season and recently exploded for a 120-yard performance against the Panthers. The 49ers also drafted a running back (Tyrion Davis-Price) in the third round of the 2022 NFL Draft. They’ve already released Trey Sermon, who was drafted in the third round of 2021. They continue to pour a ton of capital into what the league largely considers a replaceable position.

And running back has been replaceable for the 49ers. Kyle Shanahan is in his sixth season as the 49ers’ head coach and has had a different leading rusher in each of his first five campaigns. The 49ers haven’t had a 1,000-yard rusher since the legendary Frank Gore in 2014, but Shanahan’s creative run game has remained effective by committee nonetheless.

The 3-3 49ers find themselves in a three-way tie for first place in the NFC West alongside the defending Super Bowl champion Los Angeles Rams and surging Seattle Seahawks. San Francisco’s offense has largely disappointed to date. They’re the 20th-ranked scoring offense (20.3 points per contest) and are averaging just 340.2 total yards of offense per outing (18th in the league). McCaffrey should add some much-needed juice to this offense.

San Francisco has largely been relying on dominant defensive performances. They enter their Week 7 tilt with the Kansas City Chiefs as the second-best scoring defense (allowing a stingy 14.8 points per game) and No. 1 overall defense, allowing a league-low 255.8 total offensive yards per game. The hope is that McCaffrey’s addition makes the 49ers more of a balanced unit.

The 49ers obviously relish their chances to advance to Super Bowl LVII. It explains Lynch’s aggressiveness. They’ve been close under the dysfunctional duo of Shanahan and Garoppolo, the latter of which will start the remainder of this season in place of the injured Trey Lance. The 49ers have qualified for two NFC Championship games in the previous three seasons, winning one. They were defeated by the Chiefs in Super Bowl LIV.

To the 49ers’ credit, the NFC appears to be wide open. The Tampa Bay Buccaneers and Green Bay Packers, two teams that are typically considered annual contenders, own a combined record of 6-6 and have clear weaknesses both offensively and defensively. Their arch-rival Rams are also 3-3 and haven’t recovered from an offseason filled with personnel changes. The perfect 6-0 Philadelphia Eagles are viewed as conference contenders but remain a young squad that lacks proven postseason success and experience.

The 49ers are all in on advancing to and winning Super Bowl LVII. A similar gamble worked flawlessly for the Rams last season but runs the risk of going haywire if it backfires. Buckle up, 49ers faithful.