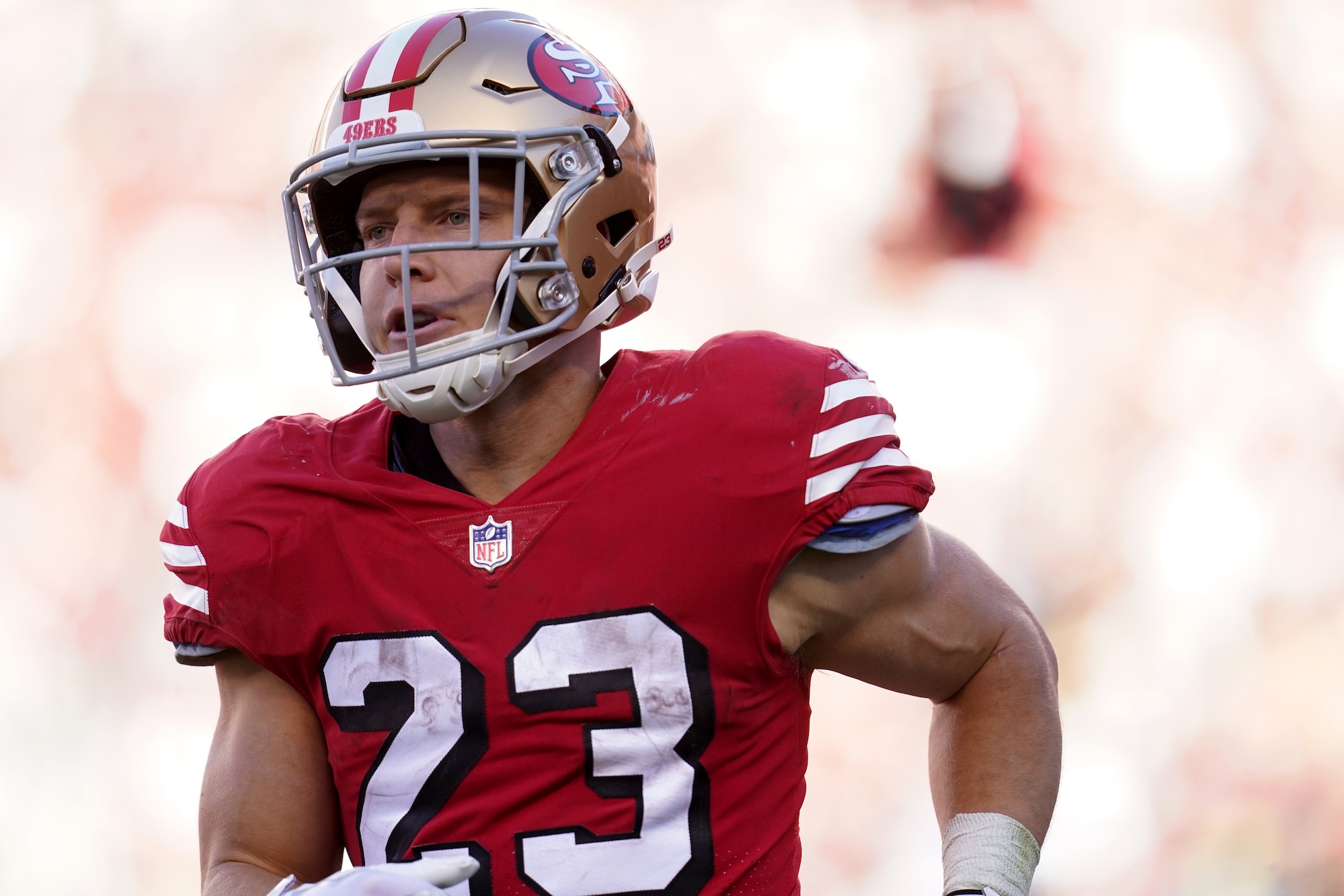 How Christian McCaffrey Is Already Fitting Into 49ers’ Offense

Sunday’s San Francisco 49ers game against the Los Angeles Rams happened to be the 10th day of running back Christian McCaffrey’s tenure with the 49ers. And in 10 days it’s become clear how big of an impact McCaffrey can make in head coach Kyle Shanahan’s offense.

The two-time All-Pro running back didn’t light the world on fire in his first game in the red and gold as he was still getting up to speed on the new playbook, but he still made his presence known. Playing against the Kansas City Chiefs last week, McCaffrey put up 62 yards from scrimmage on 10 touches. The 49ers finished the game with 444 yards of offense but struggled to finish drives with McCaffrey still not fully prepared.

Entering their divisional game against the Rams on Sunday, the 49ers especially needed McCaffrey to step up with their normal dual-threat rusher/pass-catcher Deebo Samuel out with a hamstring issue. And step up McCaffrey did. He lit up Los Angeles’ defense to the tune of 94 rushing yards on 18 carries (5.2 yards per carry), 55 receiving yards on eight catches, and 34 passing yards on a single attempt. He also scored three touchdowns on the day: one rushing, one receiving, and one passing.

Like in most games in which McCaffrey is healthy enough to play, he was dominant in every facet of his game. His great rushing ability was on full display in the Shanahan offense as McCaffrey worked his way through traffic at the line of scrimmage and second level to break away for some nice runs. His vision, contact balance, elusiveness, and physicality were all working in tandem to give the 49ers and their fans a good vision of how much McCaffrey is able to create with the ball in his hands.

That wasn’t just the case with his rushing ability. The veteran back was creating tons of yards after the catch using those same skills to find green grass. In fact, McCaffrey leads the league in yards after catch above expected (+163) according to Next Gen Stats. That’s not too surprising given the flashes on tape and the numbers he puts up on the stats sheet. On Sunday against the Rams, McCaffrey netted -1 yard before the catch with 56 yards coming after the catch.

McCaffrey’s ability to create yardage with the ball in his hands is a big part of what makes him such a special running back, but don’t sleep on how he’s able to get the ball in the first place. McCaffrey has extraordinary pass-catching abilities, especially for a running back, and he showed that off on Sunday with a leaping grab for a receiving touchdown.

First, it’s impressive that McCaffrey had the football IQ to take off once he saw the cornerback on him freeze up. As soon as the corner started drifting in from the flat because of Jimmy Garoppolo’s scramble to the right side, McCaffrey almost simultaneously broke for the end zone. It was just in time for Garoppolo to make a perfectly placed throw before the pressure got to him. Of course, it was only a perfectly placed throw if his pass-catcher had the ball skills and good hands to leap, adjust his body in mid-air, and secure the catch inbounds as two defenders crashed on him. Luckily for Garoppolo, McCaffrey is a special kind of pass-catcher.

The 49ers obviously don’t expect McCaffrey to score a rushing, a receiving, and a passing touchdown every week, but Sunday’s performance was a fitting display of just how much he can bring to his new offense. San Francisco already had a special dual-threat player in Samuel, and now with McCaffrey, they have two guys that can thrive in an offense nearly tailor-made for them. The McCaffrey move also gives the 49ers extra insurance on Samuel, both in taking some of the offensive workload off of his shoulders and in having another extra-special player ready to ball out should Samuel be out with an injury like he was on Sunday.

Again, it’s only been 10 days (and two games), but all McCaffrey has done with the 49ers so far is give them more reasons to believe they made a great move.