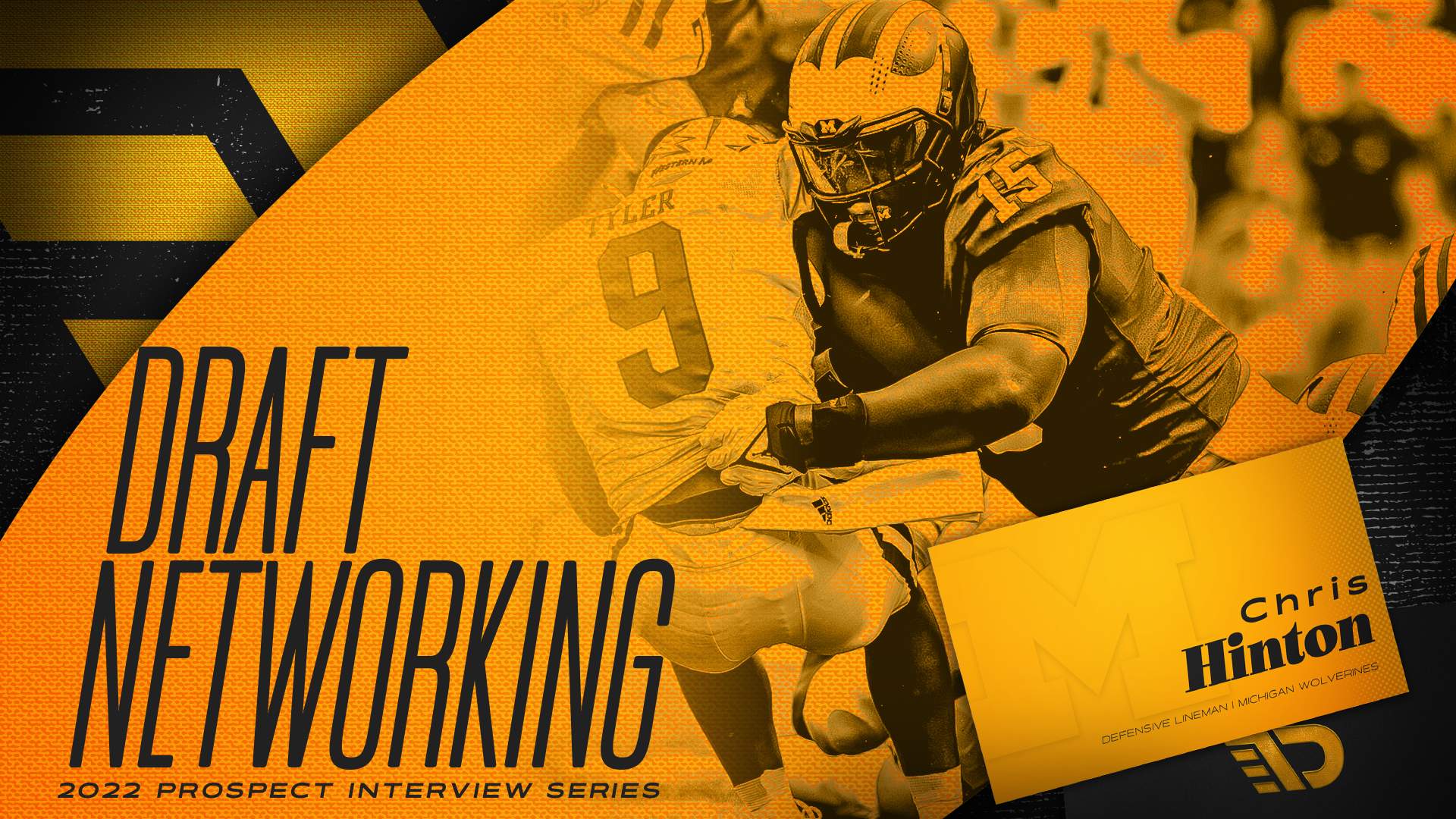 Michigan’s Chris Hinton is a hard-nosed, physical defensive lineman in the 2022 NFL Draft that will carve out a role for himself at the next level. The son of Chris Hinton Sr., a former eight-time NFL All-Pro offensive lineman, Hinton possesses legitimate NFL bloodlines. Hinton started all 14 games for the Wolverines in 2021 and helped spearhead an elite defensive line that stuffed the run and got after opposing quarterbacks at a high level.

Hinton recently spoke exclusively with the Draft Network regarding his career as a Michigan Wolverine, how he helped set the tone for their dominant defensive line, his skills as a run stopper, qualifying for the playoffs, playing for coach Jim Harbaugh, unlocking Aidan Hutchison and David Ojabo, and so much more.

JM: You started all 14 games for Michigan in 2021 and what a season it was. How do you look back on your final season as a Wolverine?

CH: I like to reflect on our success as a team first and foremost. I thought we had a great season. We won The Big Ten and we achieved a bunch of our goals. We did what we set out to do and that was to have a great year together as a team, especially on the defensive side of the ball. We were one of the best defenses in the country. Individually, I thought I played really well this past season. I feel like I did what I needed to do. I was really happy with my season personally, and as a team as well.

JM: As you should. Qualifying for the College Football Playoff under the current format for the first time in Michigan history must have been a special feeling. What will forever be your takeaway from that experience?

CH: You said it. To be one of just four teams to qualify for the College Football Playoff is a terrific feeling. It was really amazing. It was a dream come true for us and represented an accomplishment that I’ll never forget. It was a great experience.

COVID was unfortunately spiking up again at the time, so the experience was somewhat altered and toned down. We weren’t able to do everything that teams did in the past, but it was still such a great time for us all. We obviously wish the results went differently but it was a lot of fun. I’ll forever be thankful that I got to be a part of that team.

JM: We love that. What’s it like playing for coach Jim Harbaugh?

CH: I feel like that’s a question everybody asks me (laughs). Everybody is so curious about what coach Harbaugh is really like. I have nothing but great things to say about coach Harbaugh.

He’s always going to push you to be your best. He loves football. He’s all about football, but he really cares about his players on a personal level. He wanted us to be our best both on and off the field. Us players, we felt that genuine love from him. We felt that warmth from him. We all responded really well to coach Harbaugh. We played really hard for him. Everybody loves coach Harbaugh.

JM: He’s a terrific coach. You’re a high-level run stopper. I feel like that’s what Michigan asked you to do within the scope of their defense. Talk to me about the approach required to stuff the run.

CH: Your mindset comes first. If your mindset isn’t in the right place to take on that block and stuff the run, you’ve already lost that rep. My defensive line coach Shaun Nua really preached that mindset to us. It’s always been a strength of mine, and I feel like coach Nua brought that out in me even more.

Mindset comes first, and then it’s hand placement, you need to be in tight with the offensive linemen so you can gain control. You need to know your pressure points. Last but not least, you need to have a strong, good base. All of those things combined will make you an excellent run stopper.

JM: That’s terrific. You clearly understand what it takes to stop the run at the highest level imaginable. Doing the dirty work, you helped unlock guys like Aidan Hutchinson and David Ojabo on the edge. What do you enjoy about doing the dirty work that doesn’t get the recognition it deserves?

CH: I’m a selfless player. I want to win at the end of the day. Whatever the team needs me to do to win, I’m going to do that to the best of my abilities. That’s what I needed to do in order for our defense to reach the heights we reached. All of the guys that played inside with me, guys like Donovan Jeter, we really needed to be selfless. We needed to be dogs. We took on that responsibility and ran with it.

I felt like we were a very selfless group this past season. We tried to help out our EDGE defenders, but those guys are great players at the end of the day. They didn’t need much help (laughs). Aidan and Ojabo are going to get after the quarterback. We did what we could to help them out. We stuffed the run up the middle and we collapsed the pocket in the passing game. We saw all of that pay off on Saturdays. Seeing our team have that success, it made me happier than any individual success ever could. It’s a team game at the end of the day.

JM: I love your attitude and I have a feeling I know where part of it comes from. Your father, Christopher Hinton Sr. was an eight-time All-Pro offensive lineman. He was the fourth overall selection in the 1983 NFL Draft and went on to have an extremely successful career. What’s the biggest lesson he’s taught you along your journey?

CH: First of all, I’m extremely thankful and grateful for him as a person. He’s done so much for me and I can never thank him enough for everything he’s done. All of the effort and time he’s poured into my success, it means the world to me.

One of the things he always preaches to me is hard work. He taught me to never get complacent. I’ve always been told to work hard at my craft and that’s exactly what I’ve done. Someone out there is always working hard as well and you never want to fall behind. You can’t get complacent with where you’re at because there’s always more to come, more to achieve. If you want to achieve what you set out to achieve, you have to work hard, put your mind to it and dedicate countless hours. You have to put in the time both on and off the field. That’s one thing he taught me from a young age. It really resonated with me.

Another thing he says, he told me if he could re-do his career from the start, he would have taken better care of his body. He doesn’t want me to make the same mistakes he made. I eat right, I have a good diet and I drink a ton of water. I do all of the small stuff that helps lead to major victories. It helps me stay healthy and attack my training regimen to the best of my ability.

JM: It sounds like he’s been a terrific mentor and father to you. You had so many amazing teammates at Michigan, and we’ve touched on that, but I’m going to put you on the spot. If you were going to war tomorrow and could only bring one teammate with you, who would you bring and why?

CH: If I was going to war tomorrow, I’d bring Mazi Smith with me. That’s a dude right there. We played on the inside together. We came in together. The circumstances never matter to him. He’s going to chase after it no matter what. Good or bad circumstances, he remains the same driven individual through it all.

JM: He sounds like a terrific teammate. I really appreciate your time today. A team is going to get one heck of a defensive lineman and teammate when they draft Chris Hinton. What kind of impact are you going to make at the next level?