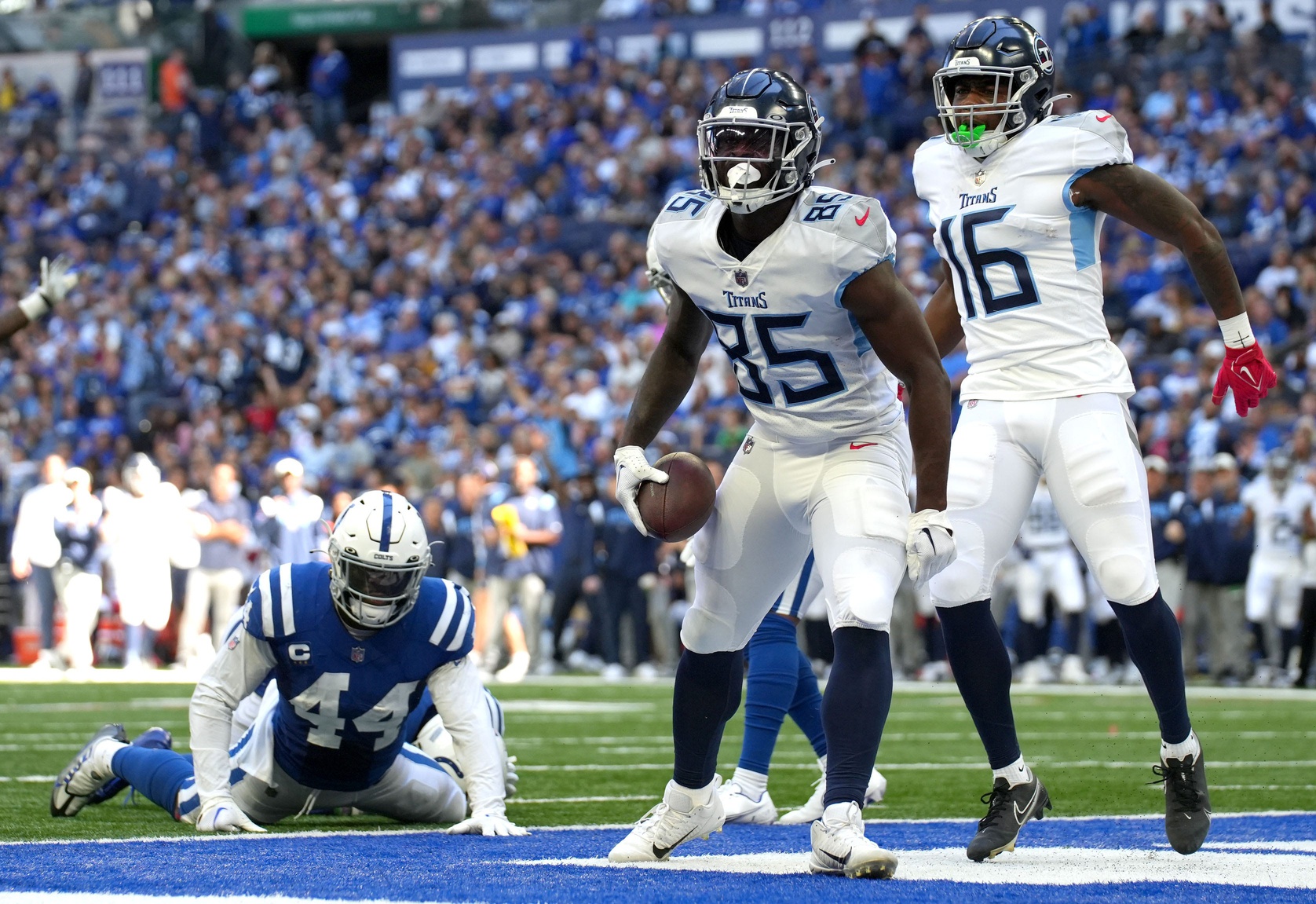 Tennessee Titans rookie tight end Chigoziem Okonkwo appears primed to capture an expanded role in their offense. The Titans are preparing for a potentially momentum-swinging contest against the Indianapolis Colts this Sunday. It marks the second and final regular-season meeting between the Titans and Colts after Tennessee claimed victory in Week 4. The victor will momentarily claim sole possession of first place in the AFC South. Look for Okonkwo to make a direct impact on Sunday’s outcome.

Titans starting quarterback Ryan Tannehill is clamoring for Okonkwo to see the field with more consistency. We agree with his evaluation. The Titans should get Okonkwo involved against the Colts.

“He [Okonkwo] made some plays for us the last time we played the Colts,” Tannehill told reporters on Wednesday. “His talent is showing. Hopefully we can get him the ball. I think his role will continue to develop as the season progresses.”

Okonkwo recorded season-highs in receptions (3) and receiving yards (38) while scoring the first touchdown of his career against the Colts in Week 4. Tannehill and Okonkwo began developing an on-field connection during that contest. Okonkwo was a receiving mismatch against an unprepared Colts defense.

Okonkwo has accounted for anywhere between 17% and 29% of Tennessee’s offensive snaps from Week 2 onward. Okonkwo capitalized on his modest 13 snaps in that Colts contest. The bye week provided the Titans’ coaching staff with an opportunity to identify players who have earned more playing time. They should have earmarked Okonkwo, who could step into the starting lineup immediately.

Okonkwo is a prime candidate to supplant the struggling Austin Hooper. Okonkwo has looked considerably more explosive than Hooper. Hooper was signed to a one-year contract worth $6 million in the offseason in order to help Tennessee upgrade their tight end room. That hope hasn’t come to fruition with Hooper crawling to just six receptions for 55 yards on 11 targets. Hooper may be on the trading block, according to multiple reports. Tannehill admitted the two have lacked chemistry this season.

“For whatever reason, the chemistry hasn’t been there,” Tannehill said when asked about his lack of connection with Hooper. “I have a lot of faith in him. We’ve put a lot of work into our connection. I’m waiting for the ball to start rolling in his direction.”

Tennessee’s offense remains a run-heavy unit, hence Swaim’s heavy involvement. The tape indicates Okonkwo has arguably been their best blocking tight end when afforded opportunities, however. It’s an area that could end up earning Okonkwo the playing time he ultimately deserves.

“Blocking is about being a complete player,” Okonkwo told The Draft Network in February. “I never want to be a part-time player that sees the field on certain downs. That’s terrible for a team and their offense. It tips your hand offensively. It gives keys away to the defense. I don’t want to be that guy. I don’t want to be stereotyped because I’m an athletic tight end. I really wish people would just turn on my tape, as you said. I’m really out there blocking.”

It’s that attitude that may get Okonkwo on the field with regularity. Okonkwo has been Tennessee’s best-performing tight end despite the small sample size. His overall involvement in offensive coordinator Todd Downing’s offense should explode down the stretch of the season.