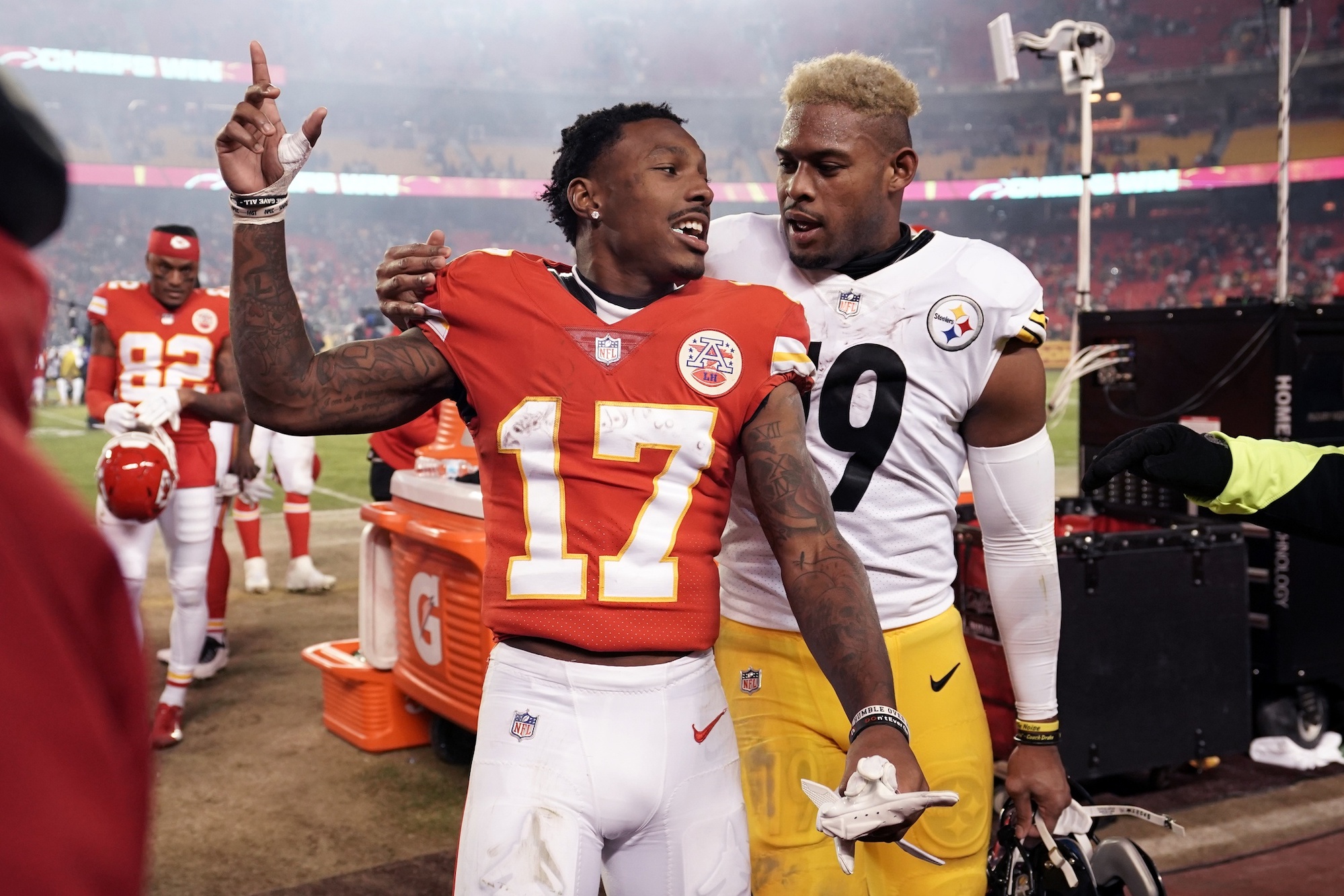 Who Will Emerge As Chiefs’ New WR1?

Starting quarterback Patrick Mahomes needs to quickly develop chemistry with his new weapons. Returning tight end Travis Kelce is expected to be Kansas City’s most productive receiver as he attempts to achieve a record-breaking seven consecutive 1,000-yard seasons, but I expect Smith-Schuster to become the Chiefs’ second-leading receiver in 2022.

Smith-Schuster signed a one-year contract with the Chiefs worth a maximum of $10.75 million earlier this offseason. Smith-Schuster is betting on himself by accepting a one-year agreement and clearly expects to capture leverage toward securing a long-term contract following the conclusion of the 2022 campaign. He’s in an ideal position to achieve his wishes.

Outside of Kelce, Smith-Schuster is easily Kansas City’s most proven pass-catching weapon. The former USC standout broke out of his shell as a sophomore in Pittsburgh by recording career-highs in receptions (111) and receiving yards (1,426) in 2018 while playing alongside an at-the-time dominant Antonio Brown. It’s worth noting that Smith-Schuster has had difficulties replicating that form since then, but did enjoy a rather successful 2020 season that saw him score a career-high nine touchdowns. Smith-Schuster was limited to five regular-season appearances in 2021 after suffering a shoulder injury in October but is now fully healthy and ready to produce in Kansas City.

A dominant big slot option that often thrives underneath and as a yards-after-catch threat over the middle of the field, Smith-Schuster’s career in Pittsburgh began dwindling once the Steelers began placing more trust in the likes of Chase Claypool and Diontae Johnson. A versatile weapon was asked to become less versatile over time as the Steelers’ offense became increasingly willing to give multiple wide receivers the lion’s share of the targets. Smith-Schuster now finds himself in an excellent position in Kansas City to recapture the magic and production that once made him the league’s most exciting ascending receiver.

Smith-Schuster’s ability to win vertically while creating separation down the field should allow him to endear himself to Mahomes rather quickly. His outstanding strength at the catch point will make him a consistent target in Kansas City’s high-octane passing game. There’s no denying his output initially suffered following Brown’s departure. Smith-Schuster often took advantage of an opposing defense’s willingness to divert the majority of their attention towards Brown. He’ll likely find himself in a similar situation with defensive coordinators allocating the majority of their resources toward limiting Kelce.

When analyzing the alternative options, I become increasingly comfortable with Smith-Schuster’s potential in this offense. Valdes-Scantling represents an intriguing addition but should be limited to a deep-threat role. Playing alongside Mahomes essentially guarantees the creation of explosive plays for Valdes-Scantling, but the consistent production will likely trend toward a more traditional do-it-all receiver such as Smith-Schuster.

Chiefs fans are undeniably excited about the rookie Moore from Western Michigan. Veach traded up in order to select Moore, who may quickly carve out a role for himself in three-receiver sets. It’s worth noting Moore faces a stark transition and step up in competition from the MAC to the pros and will likely require time to appropriately acclimate before producing big-time numbers. Mecole Hardman returns and will undoubtedly be involved, but Hardman’s routine failure to develop into a consistent No. 2 receiver has rightfully forced Veach to add several pass-catchers this offseason. Smith-Schuster is a proven commodity.

As the impending season nears, Mahomes and the Chiefs will look to Smith-Schuster to produce gaudy numbers when it matters most and I expect he will deliver a 1,000-yard receiving season. Competing in a new-look, competitive AFC West will threaten Kansas City’s divisional throne. Look for Smith-Schuster to play a sizable role in the Chiefs’ successful defense of that throne.