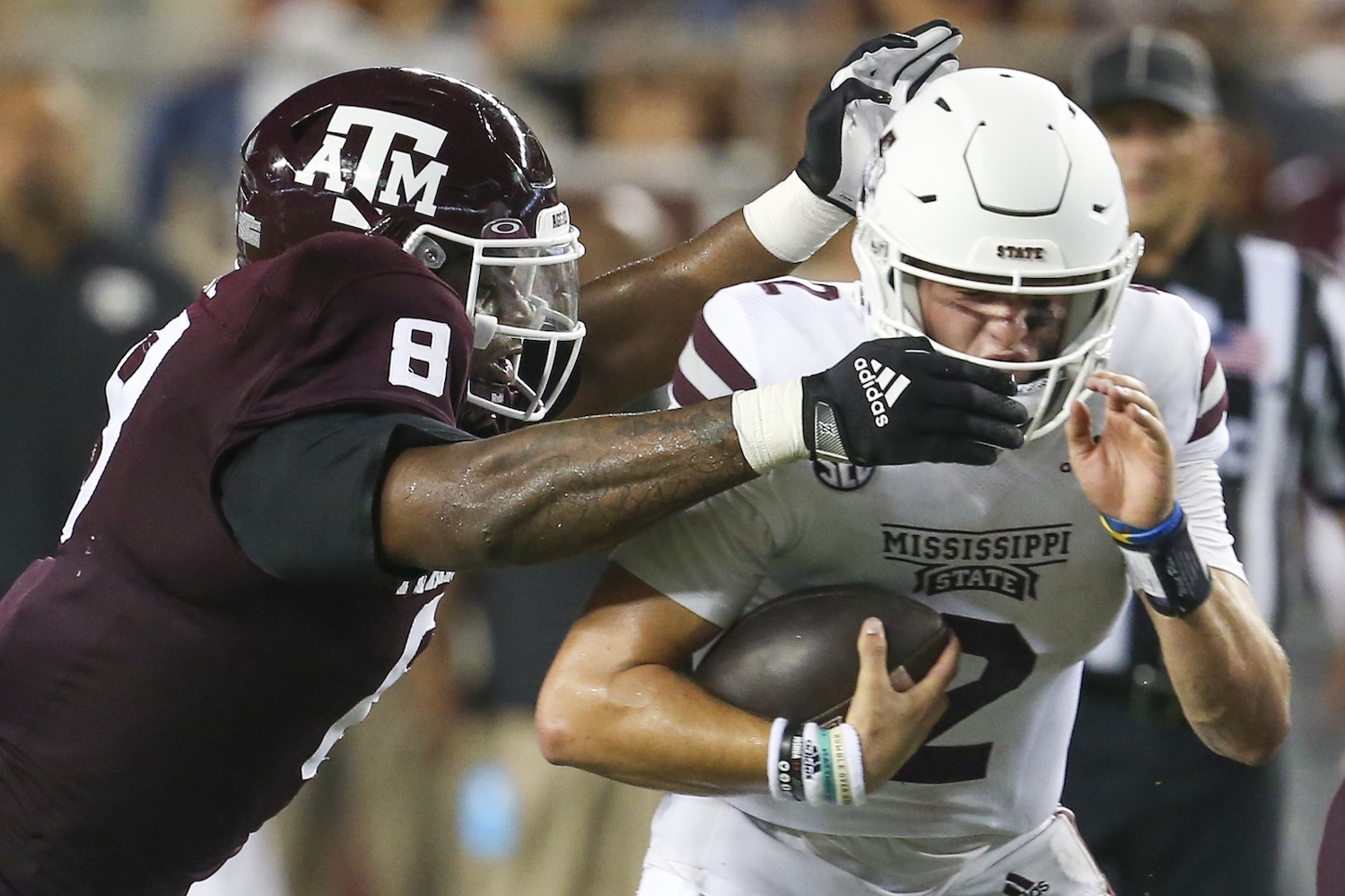 The Chicago Bears’ 2022 NFL Draft outlook has changed quite a bit since my last attempt at a Bears’ seven-round mock draft. They have an extra second-round pick from the Khalil Mack trade and have added a few veteran players in free agency to address – in some capacity – their biggest needs.

Byron Pringle is the ‘big get’ at wide receiver so far, but he won’t deter General Manager Ryan Poles from addressing the position in the second round; at least, not in my mock draft. Justin Jones was added as a potential three-tech for Matt Eberflus’ defense but the Bears can do better than that, too. Lucas Patrick is the new starting center but Poles won’t shy away from adding more starting-quality interior offensive linemen.

With that in mind, here’s my latest best guess at what the Bears will do in the 2022 NFL Draft. As always, I went head-to-head against TDN’s mock draft machine. You can make your own mock draft right here, too.

Sure, this pick has become a popular landing spot for a wide receiver but with the way this mock draft fell, DeMarvin Leal offered the most value at a position that remains a need in Chicago. Larry Ogunjobi’s failed physical was a big blow to Poles’ offseason plan and while he did recover with the signing of Jones, there’s no denying Leal has a chance to be a top-tier three-tech for Eberflus’ defense.

Leal’s draft stock has cooled in recent weeks and I’m not sure why. He has first-round talent and while it’s true that his motor doesn’t always run hot, he’s the kind of player who’d conjure memories of Tommie Harris if the Bears are able to land him at the top of round two.

Don’t worry, Bears fans. You get a wide receiver with the pick Chicago received from the Los Angeles Chargers in the Khalil Mack trade. And this is a great mock exercise to show just how valuable that pick has a chance of becoming.

George Pickens, had he been healthy in 2021, may have finished the season as the undisputed WR1 in the 2022 NFL Draft. But as is the case every year, out of sight out of mind. Pickens proved at the NFL Scouting Combine that he’s fully recovered from the torn ACL he suffered last spring and that he’s ready to contribute right away as a rookie. If he lands with the Bears, he’d have a huge opportunity to begin the year as one of Justin Fields’ top three receivers.

Pickens offers the size (6-foot-3, 193 pounds) and speed (4.47-second 40-yard dash) to complement Darnell Mooney perfectly. He’s a field-stretcher who can win in contested catch situations as well as serve as a quality chain-mover as an underneath target. Simply put, he’s exactly what the Bears need.

There’s a chance the Bears will target Pickens with their first pick (No. 39). He’s that good. In this mock draft, we rolled the dice and it paid off.

The trend of adding talent to the offense continues in the third round (spoiler alert: it doesn’t stop here) with the selection of another Georgia standout in Jamaree Salyer. This would be another fantastic value selection of an offensive lineman who’s being grossly overlooked right now.

Salyer offers terrific position versatility. He played offensive tackle at a high level in the SEC but is projected to kick inside to guard in the NFL. For a team like the Bears, who still haven’t committed to Teven Jenkins and Larry Borom as the starting offensive tackles for 2022, adding a prospect like Salyer gives them more options as the offseason workout program kicks into high gear.

Salyer might get drafted to play guard but end up settling in as an offensive tackle in a year or two. That’s the kind of offensive lineman that every NFL team should target and the Bears land one here in round three.

More offense? More offense! In this mock draft, the Bears land Bo Melton in the lucky fifth round – the same round that produced Darnell Mooney a couple of drafts ago. Call it a hunch but I think Melton has a chance to be a really successful pro, too.

Mooney has established himself as a capable outside receiver in the NFL and with Pickens joining the roster as a second-round pick in this mock, the Bears add Melton on day three to be a twitchy change-of-direction slot receiver who has the kind of on-field juice to challenge defenders on every rep.

Melton was one of the stars of the 2022 Senior Bowl and he carried that momentum into the NFL Scouting Combine when he ran a blazing 4.34-second 40-yard dash. Players like him usually carry a higher draft valuation inside of NFL scouting departments, so don’t be surprised if he’s a day-two pick.

But if he’s on the board in the fifth round like he was in this mock draft? Home run.

The Bears continue their effort to rebuild the offensive line in Poles’ vision with the selection of Max Mitchell, who began the 2022 NFL draft process as a quality day-two prospect. He’s slowly slid into this mid-day-three range, and while he doesn’t profile as an immediate starter on the next level, he does possess the kind of frame and on-field movement skills that Poles suggested he wants from his offensive linemen moving forward.

Remember: not every offensive lineman or wide receiver that the Bears draft in 2022 is going to be an instant starter and a player like Mitchell is a great example of this. He’s a really good depth player who can serve as a swing tackle on game day. Those guys have value, even if they don’t become fixtures in the starting lineup. Chicago needs players like that, too.

The Bears end their 2022 NFL draft haul in this mock draft with a safety. Reed Blankenship has the makings of a quality special teams player who has the talent to start in a bind. In fact, he reminds me of DeAndre Houston-Carson, who the Bears just re-signed this week. He could have a similar career path as well; Houston-Carson has a chance to start for Chicago in 2022 after spending most of his career as a special teams ace.