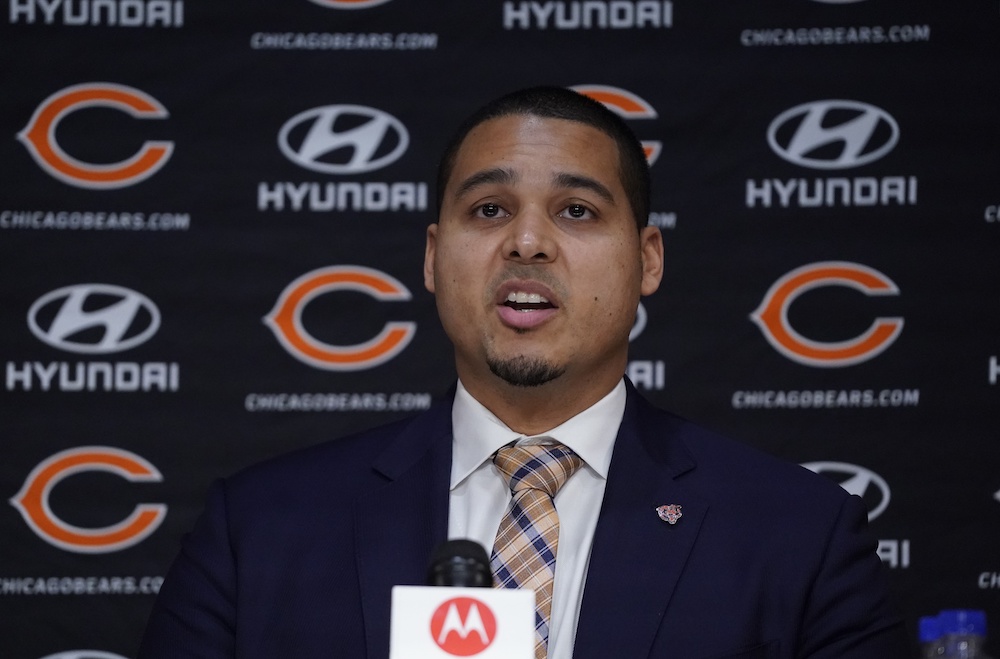 It isn’t easy to ‘trust the process.’ It’s a mantra in sports applied to teams in the midst of a rebuild. The Chicago Bears are in said rebuild right now and General Manager Ryan Poles is, in his own way, asking fans to trust his process.

Poles spoke with reporters at the NFL owners meetings last week and shed some light on his approach to this year’s free agency period. For Bears fans, it’s been a frustrating few weeks. Rather than surround second-year quarterback Justin Fields with the help fans were expecting, Poles delivered wide receivers Byron Pringle and Equanimeous St. Brown. But there’s more to this than third-tier signings who don’t move the needle all that much. There’s a process. And Poles is sticking to his.

“When you look at free agency and some of the things that were done by different teams, you want to do some of that as well, but you know that that’s not right for the Chicago Bears right now,” Poles told The Athletic. “That’s challenging. It’s like other people get to play and you have to do it the old-school way, but I know, again, why are we doing it? Why are we being patient? Why are we looking for a very specific type of player to bring in? It’s to create an atmosphere and a culture and a roster that’s going to be able to sustain success over a long period of time.”

Sustained success. It’s a theme Poles has hammered home since his opening press conference as the Bears’ general manager and it’s guiding him through his first cycle on the open market.

“I know Chicago’s been through one of those deals where it’s a real quick burst of wins and then it goes back to average or below average, and that’s not acceptable,” he said. “What’s acceptable is sustaining success over a long period of time, and this plan is going to allow us to do that.”

Plans are only as good as the wins they produce, though. Former General Manager Ryan Pace’s plan looked fantastic after the Bears won the NFC North in quarterback Mitch Trubisky’s second season; when Matt Nagy was named the NFL’s Coach of the Year in his first season on the job. That plan felt like it would inevitably produce Super Bowls. Yet, here we are, three middling seasons later – seasons that couldn’t sustain the success Pace and Nagy produced in 2018. And it’s that failure that led them both to the unemployment line.

Poles, obviously, wants to avoid that fate. But he also seems sincere in his desire to protect Bears fans from disappointment. And while those same fans are disappointed in Chicago’s lack of activity in the short-term, it’s the long-term vision that matters most. It’s a vision that in Poles’ mind is very clear, and he won’t allow outside noise to cloud it.

“I never feel rattled,” he said. “I just adjust and adapt. I try not to get overly emotional about things, and I think that’s important in this job. Some of the leaders that I’ve seen and grown up with, that’s how they operated, and it allows you to be disciplined and not do crazy things under pressure. It allows you to pivot when you get hit with something unexpected. All of that has come up in a really short period of time.”