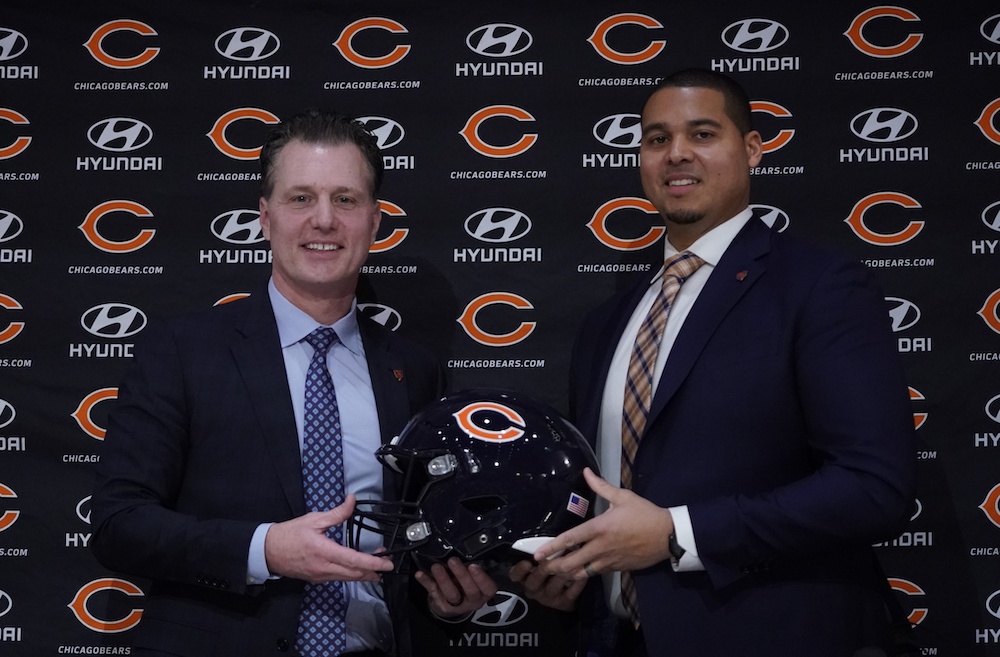 The value of the 2022 NFL Draft is in its wide receiver class. Edge rusher has a strong argument too, and there’s a really good opportunity for teams that need to level up their offensive line to accomplish that goal in the first two rounds. But for a club like the Chicago Bears, the depth of this year’s wide receiver prospects is good news for a roster that needs an injection of pass-catchers.

Unfortunately for General Manager Ryan Poles, wide receiver isn’t the only position lacking depth and impact players. As it currently stands, the Bears only have four legitimate starters along the offensive line. Guard James Daniels’ departure in free agency left a void in the starting lineup that has yet to be filled. If Boston College’s Zion Johnson begins to fall, buckle up.

Bears fans were thrilled that tight end Jesper Horsted was re-signed last week, but Horsted alone isn’t enough to bolster a tight end group that’s hanging most of its hopes on third-year pro Cole Kmet. There’s still a lot of upside with Kmet, who turned just 23 years old last month, but tight end has become a critical position in recent years and teams with an explosive pass-catcher have a big advantage on game day. Kmet doesn’t feel like he’ll develop into that guy, so if a prospect like Coastal Carolina’s Isaiah Likely is hanging around in the third round? Don’t be surprised if he becomes a Bear.

The defense has its share of issues, too. Cornerback continues to be somewhat overlooked as one of the Bears’ biggest draft priorities. Last year’s rookie surprise, Thomas Graham Jr., played above his sixth-round draft slot and looked like Chicago’s long-term answer opposite Jaylon Johnson. There’s a chance he’ll be that guy but the Bears will be playing with fire if they don’t add competition come the end of this month. Keep an eye on Auburn’s Roger McCreary in the second round.

The Bears could look to add a defensive lineman tailored for the three-technique in the second or third round. Poles signed defensive tackle Justin Jones as his Plan B following Larry Ogunjobi’s failed physical, but Jones isn’t the type of talent whose presence will prevent the Bears from using a high draft asset on the position. Oklahoma’s Perrion Winfrey would be a good get on day two.

Safety warrants attention at some point early in the NFL Draft, too. Eddie Jackson’s unstable reputation has the backend of the defense on shaky ground. Perhaps he re-emerges as one of the league’s top defensive playmakers. But if he fails, the Bears have a huge problem. Safety could be a sleeper position to be one of Chicago’s early picks, maybe even in the third round. Former Titans safety Dane Cruikshank was signed to add competition with DeAndre Houston-Carson to start opposite Jackson, but it’s a spot that can be a rookie’s for the taking by the time training camp rolls around. Penn State’s Jaquan Brisker would be great value in round two.

The general theme here is pretty obvious. The Bears have a lot of holes. They can’t all be filled with rookies in the 2022 NFL Draft. Chicago has six picks: two in the second round, one in the third round, two in the fifth round, and one in the sixth. With so few impact players added in free agency, the Bears’ first three selections have to be players who are capable of contributing, if not starting, right away.

If the NFL Draft were held today, with how the Bears’ roster is currently constructed, those first three picks are almost certain to be a wide receiver, cornerback and an interior offensive lineman. They almost have to be. If not, Poles will be forced to dip into the final wave of veteran free agency to sign starters. Not depth pieces, but starters. That’s a slippery slope. It’s a temporary fix. Those rarely work out, and in an offseason focused on a long-term vision over short-term success, the NFL draft is where these starting roles will be addressed.